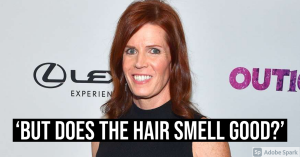 As Biden continues to appoint people to his transition team, one of the people he has chosen is an open sodomite who also dresses like a woman.

President-elect Joe Biden has chosen a transgender veteran to be part of the transition team at the Department of Defense.

Shawn Skelly previously worked in the Obama administration in multiple defense and transportation roles, and became the first transgender veteran to be appointed by a president in 2013.

Skelly’s appointment comes as the Trump administration has banned transgender people from serving in the military under their self-identified gender.

The ban is still being battled in court, but Biden has signaled that he plans to overturn the executive order after he’s sworn in as president on Jan. 20.

Skelly has worked as an acquisition analyst at CACI International, Inc., an international IT consultancy firm, for the past two years, according to a LinkedIn bio.

The U.S. Navy veteran joined the Obama administration in 2013, first as Special Assistant to the Under Secretary of Defense for Acquisition, Technology and Logistics at the Department of Defense, then as the Director of the Office of the Executive Secretariat at the Department of Transportation, according to a LinkedIn bio.

Skelly is also vice president at Out in National Security, an advocacy organization for LGBTQ+ national security professionals, according to their website. (source)

Now I am going to take this from a strictly pragmatic viewpoint. We already know the moral reality about the evils of sodom, and that is always first because it is a matter of truth. For the sake of exercise, let’s consider this situation.

Transgenders are known sometimes as 40%-er or 41%-ers, because those are the approximate rates at which they tend to commit suicide, as it is something that is often attributed to acute forms of mental illness overrepresented among them as a bloc.

Transgenderism has been, until very recently, associated with illness. Call it mental illness, psychological illness, spiritual problems, it is not natural that a man would want to pretend to be a woman, demand others call him such, and mutilate his body to try in a failed attempt to be a woman because biologically, one just does not lop off one’s member, drill a hole between one’s legs, and put on a dress to become a woman, since gender is genetically encoded into all cells of one’s being. It is why Monty Python made a famous sketch about this, because it is illness.

Yet this is the irony- that comedy has become reality.

Ask yourself, do you want a person who publicly engages in a practice grossly and inseparably associated with mental illness as well as high rates of suicide in a position of major leadership that involves NATIONAL DEFENSE, where people’s lives and property are at risk from real enemies?

It does not matter that this person was under Obama, and so Biden is probably familiar with it, because the issue here is one of principle. Indeed, one cannot change one’s race since this is genetically encoded, yet this particular kind of sodomite would invoke racism yet deny the very science that rebukes racism in practice so he can pathetically justify self-abuse and get other people to laud his masochism.

Yet this is what Shoebat.com warned about, for as the Boomers pass into history and the Millennials and Zoomers, both which are strongly inclined to the ways of Sodom take power, they will likely establish more of said persons or those who support such ideas into power and will have major effects on the future. Likewise, with the trend going in this way, it will also continue to push against Christianity and Christians to their extreme isolation and detriment.