You are here: Home › Norway Makes It A Crime To Say Anything Critical About The Sodomites Or Their Behaviors 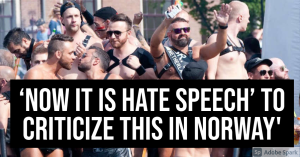 The concept of “free speech” in its true form is speech meant to lead to the truth. However, what has happened with “free speech” is that it has been used as a means for licentious speech, and eventually, whatever speech is politically or socially acceptable at the moment. For a while this worked because of the culture, but as this changes, the trend will be to eventually rebrand “free speech” as to mean “that which is acceptable right now”.

Having noted this, ThomsonReuters reports that Norway, which already extends many legal protections to sodomites, has increased them, making it a crime punishable by up to a year in jail for saying anything against the sodomites in private and three years if said in public as part of a “hate crime”.

Norway’s parliament outlawed hate speech against transgender and bisexual people on Tuesday, expanding its penal code which has protected gay and lesbian people since 1981.

People found guilty of hate speech face a fine or up to a year in jail for private remarks, and a maximum of three years in jail for public comments, according to the penal code.

“I’m very relieved actually, because (the lack of legal protection) has been an eyesore for trans people for many, many years,” said Birna Rorslett, vice president of the Association of Transgender People in Norway.

Norway is one of the most liberal countries in Europe for LGBT+ people, allowing trans people to legally change gender without a medical diagnosis in 2016. But reported homophobic crimes have risen, according to advocacy group, ILGA-Europe.

The bill was approved on its second reading without a vote, a parliamentary spokeswoman said, after it was backed by lawmakers on its first reading last week.

Trans people are “an exposed group when it comes to discrimination, harassment and violence”, Minister of Justice and Public Security Monica Maeland said.

“It is imperative that the protection against discrimination offered by the criminal legislation is adapted to the practical situations that arise,” she told the Thomson Reuters Foundation in emailed comments ahead of Tuesday’s reading.

Under the penal code, people charged with violent crimes can receive harsher sentences if a judge decides their actions were motivated by someone’s sexual orientation or gender identity.

The law’s opponents argued that it could criminalise free speech criticising LGBT+ rights, said Anine Kierulf, an assistant professor of law at the University of Oslo.

The bar for prosecution is high, requiring direct incitement against people or language that dehumanises them, she said.

“There are a lot of very hateful things you can say about the protected groups,” she said. (source)

This is in Norway, but watch for something like this as a trend in the US, since sodomite issue is major, many people support it, and it is directly tied to attacking Christianity, since Christianity is inherently opposed to supporting the abhorrent and inherently graphic deeds of sodom.

Karl Rove Declares That Trump Will Not Prevail Over Biden
Will The Tires Stop?
Follow