You are here: Home › Fed Prepares To DOUBLE Money Printing In 2021 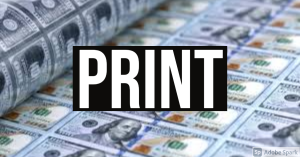 I have been saying over and over and over at Shoebat.com that the problem with the economy is the debt, and that the government has only one solution through her private bank (the Federal Reserve) which is printing money, and they WILL print for political reasons until the currency is worthless because of the debt.

I cannot stress this enough- the debt problems are systematic, they are privy to no political party alone, and whichever party is in office is going to get blamed for the debt. This is “hot potato” or “musical chairs” but with real people and real lives.

Unfortunately, it appears that this pattern is going to continue, as according to Zero Hedge the Federal Reserve Bank is going to double its monetary printing efforts, financializing essentially all its monetary supply in 2021 alone.

One certainly can’t blame the Fed for not doing enough to stabilize markets during the covid crisis: having expanded its balance sheet by over $3 trillion this year alone and injecting $120 billion in liquidity every month, the US central bank – which is also buying corporate bonds and junk bond ETFs – remains the first and last line of defense for any equity drawdown.

As an aside, and for those asking why the Fed continues to “confuse” markets with the economy, the answer is simple: since the value of financial assets in the US economy at a record 620%+ of GDP, for the Fed capital markets are the functional equivalent of the economy since a market crash would destroy the highly financialized US economy, and thus can never be allowed.

There is just one problem: after a year in which the US budget deficit hit a record $3.1 trillion, and with the US facing a deluge in new debt issuance in 2021 which has already led to the biggest October deficit on record and which at $284 billion suggests another full-year deficit of well over $3 trillion (assuming no further lockdowns).

As Bank of America’s Michael Hartnett calculated in his latest Flow Show report published on Friday, over the next year, “Treasury supply will significantly outstrip Fed purchases in Q4 & Q1”, and this is even without factoring in the possibility of another major fiscal stimulus.

The problem: while the Treasury faces net Treasury issuance of roughly $2.4 trillion, the Fed is expect to monetize less than half of this total, or $960 billion. Considering that in 2020 under the auspices of “helicopter money” (from which we remind readers there is simply no coming back) the Fed will have monetized virtually every dollar of net issuance, this is a huge cliff and one which could lead to a shock drop in Treasury prices if the market reprices (lower) its expectations for Fed monetizations.

In short: the Fed needs to more than double its scheduled monthly QE in 2021 just to catch up to where it was in 2020.

Of course, other central banks are facing the same challenge of insufficient monetization and some have already taken appropriate steps: recently both the RBA and BoE announced an expansion in their QE.

Just next month, the ECB is also expected to announce a dramatic expansion of its QE operations and as Variant Perception writes, the central bank “may end up absorbing all government supply in 2021”:

The ECB has provided a clear indication that additional stimulus will come in December. A further expansion of PEPP could result in the ECB purchasing most, if not all, of the EGB supply in 2021. (source)

I cannot say this enough- a currency crisis IS INEVITABLE at this point. It was avoidable (albeit with a serious deflationary depression) UNTIL Trump signed the COVID-19 stimulus bill. That was the “nail in the coffin” that not only transition the US economy from “capitalism” to outright fascism (the merging of state and corporate power by way of the conditions for corporate bailouts), but that will force future government policy, for political reasons (barring a VERY MORALLY STRONG president willing to sacrifice himself and his party for the good of the nation long-term, which is always highly an unlikely scenario) WILL cause hyperinflation.

Trump should be on his knees THANKING that he is likely not going to be in office the next four years, since while the man may be a sore loser and complain, he is NOT going to get blamed for the debt issues. There is a strong chance this will fall on Biden and, given Biden’s very poor health, possibly on Kamala’s shoulders. If this does, it could be a death blow to the Democrat party, as they will go down in history as the party that “bankrupted” America.

CRASH: 80% Of New York City Hotels Face Bankruptcy
Will The Next Russian-Backed Conflict Start On A Strip Of Land In Moldova?
Follow