You are here: Home › Is The US Opening The Way For Turkey Into Syria? 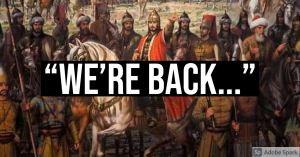 Historically speaking, Syria has been dominated by many powers, and for about five centuries was under the control of her norther neighbor of Turkey under the Ottomans. In recent years, Syria has seen a US military presence owing to the wars in Iraq and Syria. However, as Al-Masdar news reports, an interesting change may be under way as the US is withdrawing troops from Syria to Iraq.

The U.S. army withdrew a number of its vehicles and soldiers from eastern Syria towards the northern region of Iraq, while it imposed a security cordon around a town in the eastern countryside of Deir Ezzor.

According to a Sputnik Arabic correspondent in Al-Hasakah, the U.S. army transported a number of military vehicles with about 50 soldiers from its illegal base in Al-Malikiyah to the northern region of Iraq for the second time during the past two days.

These developments coincide with media reports about the current U.S. administration’s intention to withdraw its soldiers from eastern Syria, especially after the changes made by U.S. President Donald Trump, which included the firing of Defense Secretary Mark Esper, who was replaced by Christopher Miller.

Earlier this week, it was revealed that the outgoing U.S. envoy to Syria, James Jeffrey, had kept the total number of troops inside the Arab Republic from Trump. (source)

Now it is true that nothing was mentioned here about Turkey. Yet, given the trends in the Middle East, this is what may happen.

Turkey is a regional and world power, imperially speaking, and wants to rise again, having been rebuilt by the Americans and the Germans. She has one of the most powerful militaries in the world, and given her proximity to Syria and her long history of occupying Syria, it is only natural that she would attempt to invade her, and indeed she already has, for there have been many reports of Turkish troops entering into Syria and occupying her.

Power always abhors a vacuum, and in the Middle East, given the number of competing entities, vacuums are immediately filled by the strongest available player. In this case, it would be Turkey.

What is happening here? One cannot say for sure save other than a US withdrawal. But given the trends of a rising Turkish power and empire, a US withdrawal opens the way only for a region to be filled by the Ottoman power.