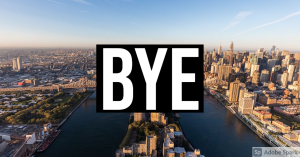 One of the trends that I have noted is that for the time, major urban areas are seeing a sort of exodus. This does not mean they are disappearing, for long-term trends suggest that the opposite is taking place. Rather, what is forming are “megaregions” in the sense of mega urban centers with sprawl going out for long distances that are subsequently surrounded by nothing. However, this also corresponds to a change in cities where amid fear of COVID-19 and increasing violence, those who can are leaving for the ‘new outskirts’ while the city centers are tending to resemble something of a dystopia from a science fiction story. The New York Post reports on this, noting that for their case of New York, a ‘mass exodus’ is taking place as at least 300,000 people, or about 2% of the city, has left for better areas.

More than 300,000 New Yorkers have bailed from the Big Apple in the last eight months, new stats show.

City residents filed 295,103 change of address requests from March 1 through Oct. 31, according to data The Post obtained from the US Postal Service under a Freedom of Information Act request.

Since the data details only when 11 or more forwarding requests were made to a particular county outside NYC, the number of moves is actually higher. And a single address change could represent an entire household, which means far more than 300,000 New Yorkers fled the five boroughs.

Whatever the exact number, the exodus — which began when COVID-19 hit the city in early spring — is much greater than in prior years. From just March through July, there were 244,895 change of address requests to destinations outside the city, more than double the 101,342 during the same period in 2019. (source)

Now this is not going to endure forever. This trend exists largely because of COVID, and it is expected that given the problems with jobs and the economy, the trend will be towards larger cities. Likewise, since COVID is being touted as a factor that is changing how people live, it will be of interest to see how COVID affects trends human interactions, such as how people relate with each other in public, how businesses serve others, and how business functions for the future.

Is The US Opening The Way For Turkey Into Syria?
German Government Tells Citizens To Brace For Four To Five Months Of Lockdowns
Follow