You are here: Home › Could Trump Still Win The Election? 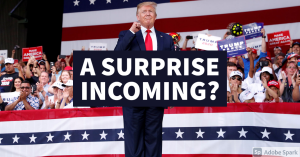 So far, things are not looking good for President Trump. He has not conceded the election (and it is likely he never will), but according to Trump’s tweets, the attitudes of fellow Republicans, and the words of many world leaders, it looks like Biden is going to be President.

However, as the saying goes, “it isn’t over until it is over”, should never be forgotten.

Again, I cannot say it enough, Trump currently seems likely to lose the fight over the election. Lacking enough conclusive proof to sufficiently challenge, in a legal sense, the vote margins that explain Biden’s presumed victory, the courts are therefore likely to reject Trump’s current challenges. As noted, it does not help that media organs on both the right and the left as well as the social media giants have firmly declared a Biden victory and are thereby of no help for Trump.

But there is still time, as uncertainty and doubt can remain alive at least until January 5th when the two Senate run-offs in Georgia are decided, which is another hotly-contested election that may invite a contest. Likewise it is also possible that Trump may actually try to stay in office by manipulating the Electoral College process not through taking the 270 electoral votes to win, but denying them to Biden and therefore forcing a runoff.

Consider how there are several more steps and deadlines in the elaborate election process for the presidency. In December, there are three: the 8th for when states determine their electors for the Electoral College, the 14th for when electors meet in their states to cast their votes for the new President and Vice President, and the 23rd for when the certificates of the electoral vote results get delivered to the president of the Senate, who is Vice President Mike Pence. In January, we have the 3rd which is when members of Congress are sworn in, and the 6th, which is when Congress meets to count the electoral votes and declare the results.

So, as noted above, with options running out to “win” the 270 required or strip them from Biden, he can try to block or delay certifications in certain states, or he can push Republican state legislators to appoint Trump electors who vote for him in spite of the results from the states, and possibly even both, with all of this spoken as theoretical options. Doing such would not be without precedent either, such as from the 1876 election, following how Samuel Tilden had amassed all but one electoral vote needed to defeat Governor Rutherford B. Hayes, his Republican competitor. The result was, in addition to the Compromise of 1877, that a bipartisan commission of five representatives, five senators and five Supreme Court justices was created, and on what became a party-line vote gave Hayes all three contested states in March of 1877 and thus the winner by a single electoral vote.

Likewise, consider that in the electoral college system, the normal practice in a state where Biden won the popular-vote total would be for state election officials to certify the results and send a slate of electors to Congress. However, it is also true that state legislatures have the constitutional authority to conclude that a popular vote has been corrupted, thus allowing them, theoretically speaking, to send a competing slate of electors on behalf of their state to vote instead. When one adds into this how the 12th Amendment to the Constitution specifies that the “President of the Senate shall, in the presence of the Senate and House of Representatives, open all the certificates and the votes shall then be counted,” it means that should disputes about competing electoral slates arise, the authority for settling them would pass to the President of the Senate- who is Vice President Pence. In this case, it is most probable that he would choose Trump as opposed to Biden, leaving Democrats with their only option of appeal to the Supreme Court.

Following also from the 12th amendment cited above, “the House of Representatives shall choose immediately, by ballot, the President. But in choosing the President, the votes shall be taken by states, the representation from each state having one vote.” Currently, Republicans have a state delegation majority with 26 of the 50 states, and they will likely keep that majority in the upcoming Congress forming. Thus a simple vote of the states could then elect President Trump for a second term, which Democrats again would appeal to the Supreme Court.

But the Supreme Court option in any case may not work, for remember, six of its nine judges were  nominated by Republicans, and because of this, will be likely to find favor with Trump.

There are also other variants of things that could happen. For example, a successful lawsuit or lawsuits could theoretically stop certification of election results, especially if it could be argued that the process for counting late ballots prevents an accurate result from being calculated. Likewise, a state or federal court could prevent secretaries of state from certifying election results. In fact, theoretically speaking, the ghost of 1876 could come back to haunt this recount because it may force the first real application of the Electoral Count Act of 1887, which has never been applied and was put in should another 1876 election type scenario happen.

I am sure there are more possible scenarios that could happen. However, these are just a few that one can think of. I mention them because while the signs point to Biden, in fairness to Trump, the election results are not over, and there are a lot of things that could, theoretically speaking, still happen that could change the results unexpectedly. Consider the unique circumstances under which Trump was elected in 2016, and the incredible controversy surrounding his tenure in office. Trump is not one to give up, and as I noted, he is NOT going to concede because, even if only in theory, he still has a chance, but not without potentially a lot of sacrifice, compromise, and political games taking place before the public or behind the scenes.

Right now, as I have said before, who knows what is going to happen? Until the election is over, it technically is not over. As such, until January, get a bucket of popcorn and a soda, because not only is what I feared- that a 2000 type scenario would repeat all over again -but that we may go back into the 19th century. After all, politics at large with populism an nationalism is heading as a general trend in this direction, so why not the elections too?