You are here: Home › Kissinger Declares Unless Changes Happen “…The World Will Slide Into A Catastrophe Comparable To World War I” 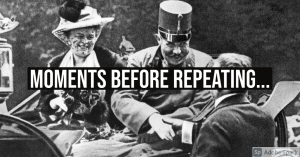 The famed US diplomat and geopolitical strategist Henry Kissinger, love him or hate him, is a man who throughout his career has had a very good ‘feel’ for American politics and the state of global affairs. He understands conflict, the nature of countries, and while no man is absolutely perfect, is a respected voice that should be taken seriously when he speaks on important matters.

In light of the trends that show conflict growing between the US and China, and how nationalism, militarism, and tribalism in general is increasing around the world, Kissinger recently stated to Bloomberg that unless the Biden administration restores some degree of amicability with the Chinese, given the increased presence of Russia attempting to assert herself under a “Eurasian” model, the US will find herself locked in a struggle between “Eurasia” over influence in Europe that could bring about another World War I type scenario.

Former U.S. Secretary of State Henry Kissinger said the incoming Biden administration should move quickly to restore lines of communication with China that frayed during the Trump years or risk a crisis that could escalate into military conflict.

“Unless there is some basis for some cooperative action, the world will slide into a catastrophe comparable to World War I,” Kissinger said during the opening session of the Bloomberg New Economy Forum. He said military technologies available today would make such a crisis “even more difficult to control” than those of earlier eras.

“America and China are now drifting increasingly toward confrontation, and they’re conducting their diplomacy in a confrontational way,” the 97-year-old Kissinger said in an interview with Bloomberg News Editor-in-Chief John Micklethwait. “The danger is that some crisis will occur that will go beyond rhetoric into actual military conflict.”

“Americans have had a history of relatively uninterrupted success,” he said. “The Chinese have had a very long history of repeated crises. America has had the good fortune of being free of immediate dangers. Chinese have usually been surrounded by countries that have had designs on their unity.”

Europe will increasingly find itself caught in a tug-of-war between the U.S. and Eurasia, Kissinger added.

“Europe has been an anchor of American foreign policy in the entire post-World War II period,” he said. “The question for them now is whether, in the evolution of relations with other parts of the world, they will attempt to play a totally autonomous role.” (source)

Now China has a long history of being invaded and destroyed by foreigners, especially Japan, and Russia is an ally of China, but in name only, since Russia does not trust China to stay out of Siberia, especially since Russia lacks the power to defend Siberia against China and prevent a serious occupation that would strip her of her power (since per Mackinder’s theory, Russia’s power derives from control over Siberia).

What will happen with China and the US is to be seen, considering that the US is helping with the remilitarization of Japan, as well as seems to be promoting Turkic nationalism in the northern and western regions of China. This is not to only mention that the US has moved very close to India, and considering how India is the fourth most powerful military in the world and is hotly at odds against China, it is nearly inevitable that in the event of conflict, China would also find herself in conflict with the subcontinent.

None of this is said to disregard Kissinger’s words. Rather, Kissinger knows that is likely there will be a conflict between the US and China, and that given the existing tensions with Russia and the fact that Germany is attempting to rise again means big problems. It doesn’t help that a new trade agreement between 15 Asian states, the RCEP was signed, and in spite of only a few western media outlets reporting on it, it could be seen as a milestone in global economic history due to the huge consequences the new agreement will have and since the economies of the RCEP members are growing faster than the rest of the world, with China being the largest but including Japan, Korea, and all of Southeast Asia as well as Australia.

Economic competition precedes political competition, and while the US is powerful, the question for the future is, will she be relegated, power-wise, to the Western Hemisphere, or will she be able to continue to, in some way, maintain her influence in faraway lands overseas? Such questions cannot yet be answered, but that is why they must be asked, because if Kissinger is right, then the world may be walking right down the same path it did hardly more than a century ago.