You are here: Home › Obama Declares That The Internet “The Single Biggest Threat To Our Democracy” 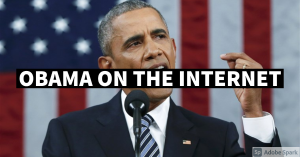 Like Trump, Obama is no stranger to controversy. During his famous rise to power in 2008, he was arguably the first President who made mass use of social media to propel his campaign. Now twelve years later, VOX reports that Obama has now changed his position, noting from the that the Internet has created a “malevolent information architecture” and as such Obama responds by saying that this is “the single biggest threat to our democracy.”

Back in 2008, Barack Obama famously harnessed the internet and social media to help win the White House. He kept up the embrace once he got there.

Now he worries that the internet and social media have helped create “the single biggest threat to our democracy.”

Obama has been saying a version of this for four years — since he left the White House — but his words are getting steadily more pointed. He’s clearly sounding an alarm, but it’s not exactly clear what he thinks we should do about it.

His latest critique comes in a new interview between Obama and Atlantic editor Jeffrey Goldberg, and before we go any further we should put it in full context: Obama was discussing a media landscape dominated not just by Facebook but by Fox News that allows Americans to choose their own distorted reality. Which means, he says, we no longer have a shared set of facts.

That assessment is now conventional wisdom among many critics of the TV and internet ecosystem. There’s almost no practical, constructive argument about how we should respond to that problem. Obama doesn’t offer one in his interview, either.

And again, it’s incorrect to say that Obama is laying the problems of our broken information landscape solely at the feet of Facebook or any other particular tech company. But he is certainly lacing into them now in a way he didn’t do prior to leaving the White House.

Obama: Now you have a situation in which large swaths of the country genuinely believe that the Democratic Party is a front for a pedophile ring…I was talking to a volunteer who was going door-to-door in Philadelphia in low-income African American communities, and was getting questions about QAnon conspiracy theories.

Goldberg: Is this new malevolent information architecture bending the moral arc away from justice?

Obama: I think it is the single biggest threat to our democracy. (source)

It is true that there is a lot of misinformation on the Internet, but who is responsible for this? Indeed, the greatest propagators of misinformation are not average people, but arguably government intelligence agencies, who promote misinformation in order to create a parallel reality so they can manipulate it for their own ends. This echoes the quote not proven but attributed to CIA Director William Casey by way of George McGovern spoken in 1981 at President Reagan’s first cabinet meeting, which is “We’ll know our disinformation program is complete when everything the American public believes is false.” One can also cite the notorious “Russian troll farms” that have proliferated on the Internet in a modern version of Cold War propaganda dissemination.

The Internet, for all of the misinformation and outright bad information on it, is a very good thing because it gives people the ability to consider alternative viewpoints and interact with others they would not normally have been given the opportunity to do. As a result, while errors will always persist in a world affected by original sin, there is a hope that people can learn more than what is just presented to them.

Now one can only estimate what Obama’s intentions may be, and to his credit, there is something to be said about malicious statements being made that affect public perception. However, the other alternative is even worse, which is in the name of ‘public good’ to stifle the flow of information, that while not without precedent, given the current structure of society would likely allow for the propagation of even more lies but in an official context, thus not solving any problem, but making more under an “official” cover and creating a black market in illegal or ‘forbidden’ ideas that will endure and eventually cause a backlash. Yet with the trends moving in what seems to be control for the sake of control, and with the genuine good-will opinion of many at stake, Obama’s words may want to be taken as a caution, a look into a possible future of the Internet where opinions and ideas are much more controlled and the ability to speak freely is only for those who dare- at potential legal risk -to venture into the dark corners of the Internet.

Could Trump Still Win The Election?
Saudi Minister Declares That Nuclear Action In The Name Of Self-Defense Against Iran Is Still An “Option”
Follow