You are here: Home › Saudi Minister Declares That Nuclear Action In The Name Of Self-Defense Against Iran Is Still An “Option” 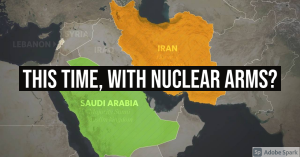 Saudi Arabia and Iran have been rivals going back to the days before Islam, so their mutual dislike of each other is not something new. What has changed are the weapons available to inflict more damage to a fuller capacity. With the advent of the nuclear age after World War II, there has been a long fear that nuclear weapons would be employed in perhaps less controlled circumstances. According to Al-Jazeera news, Saudi Arabia is hinting at taking nuclear action against Iran in the form of acquiring nuclear weapons in the name of ‘self-defense’ should, per their assessment, Iran continue to arm herself with nuclear weapons.

Saudi Arabia reserves the right to arm itself with nuclear weapons if regional rival Iran cannot be stopped from making one, the kingdom’s minister of state for foreign affairs has said.

Tehran has been working on the use of nuclear power for decades. In 2015, it signed a landmark nuclear deal with world powers to stop the development of a bomb in exchange for lifting sanctions.

But US President Donald Trump in 2018 unilaterally withdrew his country from the deal and brought it to the brink of failure.

Trump’s administration wants a more far-reaching programme and an end to Iran’s regional interference – a position supported by Saudi Arabia.

“We believe the Iranians have only responded to pressure,” said al-Jubeir.

Asked what changes he anticipates could come once President-elect Joe Biden takes charge in January, he said: “We will have to see.” (source)

For those alive during the 1950s in America, there was a concept known as “mutually-assured destruction”, which was that if the US and then-USSR were to find themselves in a conflict, that given the use of nuclear weapons and their inherently destructive potential, that the two nations would annihilate each other in a nuclear holocaust that would consume the world.

Thankfully this has not happened yet, but with the increased proliferation of nuclear weapons or other dangerous weapons, such as artificial intelligence, around the world, the chance for this continues to increase. Even just recently, the Armenia-Azerbaijan conflict saw Armenia threatening nuclear action against Azerbaijan if their Matsamor nuclear plant was attacked.

The case of Saudi Arabia and Iran is and old one, in terms of the conflict, but the trend of global conflict and the nature of man that tends toward embracing his worst tendencies has not declined. Instead, ,in the name of ‘self-defense’, all it would take is even a minor misunderstanding to trigger a series of events from which it would be very difficult to turn back save for a major war.

This is why the trend for war is so critical and must be watched, as a conflict in one small region could spiral quickly out of control into something global and terrible.

Obama Declares That The Internet “The Single Biggest Threat To Our Democracy”
Economy Goes Back Into The Toilet As Cleaning Supplies, Toilet Paper Sales Spike Again
Follow