You are here: Home › Biden’s Mind Short-Circuits Again On Television 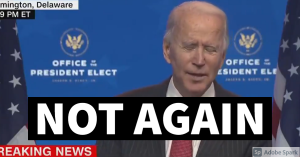 One of the trends I warned would happen is that, assuming that Biden becomes president come January 2020 (because in fairness to the situation, a lot of things could change in a month), he will be like another George W. Bush with gaffes and strange things he will say.

Apparently, Biden just committed another gaffe on television, where he started blinking rapidly followed by stuttering over his words.

Now in fairness to Biden, we don’t know what is going on here. Perhaps he made an honest mistake. Perhaps it was a slip-of-the-tongue. This would be more believable if Biden did not have already what appear to be so many signs of age-related decline, such as possible dementia and Parkinson’s disease, as many have pointed out.

If Biden continues such as this, with possible health declining, it is possible that he many not survive the next four years, which would make for a very interesting historical situation, not to mention how Kamala Harris is (without saying anything about her person) regarded as the most liberal senator in the US Congress.