You are here: Home › Russia Moves To Open Naval Base In Sudan 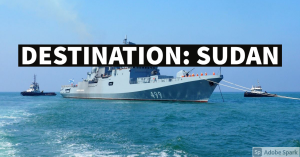 Most do not think of the largely rocky and deserted lands of the Sudan as being a place for a naval base. However, a small strip of that nation borders with the Red Sea, across from which is the nation of Saudi Arabia. It is in the port city of Port Sudan that the Russians, according to Kommersant.ru, are going to build a Russian naval base.

Russia is preparing to create a logistics center for the Navy in the Red Sea. The draft of the corresponding agreement between the Russian Federation and Sudan was published on the portal of legal information. The document assumes that the personnel of the new Russian base will not exceed 300 people, and up to four Russian warships will be able to stay in the water area of ​​Port Sudan simultaneously, including those with a nuclear power plant. The Sudanese authorities will not charge Russia for the lease of territory and facilities, but they expect the Russian side to help them strengthen their defenses. Russian experts point out that Moscow has many reasons to expand its military presence in this troubled region.

The official Internet portal of legal information published a government decree No. 1790 on submitting to the president a proposal to sign an agreement between Moscow and Khartoum on the creation of a logistics center for the Russian Navy on the territory of the Republic of Sudan. The document, presented for signature to Vladimir Putin, was prepared by the Ministry of Defense and agreed with the Ministry of Foreign Affairs and other relevant departments, as well as with the Sudanese side.

The draft agreement between Russia and Sudan says that the parties strive to “develop their military cooperation aimed at strengthening their defense capabilities,” and recognize that the presence of the Russian Navy’s PMTO in this region “meets the goals of maintaining peace and stability, is defensive and does not directed against other states ”.

The Sudanese authorities agree to create a PMTO on their territory near the city of Port Sudan, as well as to modernize its infrastructure for repairs, replenishment and rest of the crew members of Russian warships. (source)

Russia has only three seatime ports which are not frozen over in winter- Murmansk, Odessa, and Vladivostok, and all of them are dangerous close to (Norway/Finland) or directly in the path (Turkey and then Japan respectively) of major competitors Russia has warred with in the past.

This is about planning for a war. Russia is assuming potential loss to all these ports, and she is trying to rebuild and prepare her navy for what may lay ahead.

War is coming-Russia knows it, and she is already preparing for it.