You are here: Home › Zoomers Don’t Seem To Care About Sports 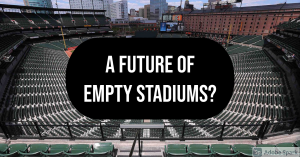 I enjoy sports, but for the most part, I prefer to play them rather than watch them, and for those I want to watch, usually they are smaller or more interesting matches. Even large-scale competitions I can enjoy, but simply for the sport itself. However, I am wholly lacking in any interest in the “bravado” that surrounds the contemporary American association with sport, where people wearing silly foam fingers and eating overpriced mass-produced food with clothes to match their “team” shout loudly and talk for hours about “their team” in a sort of contemporary substitution for religious worship, where the object of adoration is not God, but is a man throwing a ball into a tiny space with the help of other men.

It’s not I’m against sports- it’s the industry that has built up around it to efficiently extract money from people’s wallets that is so large and what turn a small game into a theatrical production. However, according to the Washington Post, as a trend to be watched with the passing of the generations, the Boomer, Gen X, and sometimes Millennial interest in sports is being lost on a majority of Millennial and most importantly, the Zoomers, whose lack of interest threatens a billion-dollar industry.

The bulky and bankable U.S. sports industry, built on towers of cash and lucrative television contracts, is confronting a Generation Z problem. The nation’s youngest cohort is fundamentally different from the generations that preceded it. Having grown up with smartphones in their pockets, its members eschew traditional television-viewing and subscribe to digital habits that make grooming a new generation of sports fans a challenge.

That challenge is being met with a sense of urgency in some corners of the sports world and a sense of alarm in others, according to interviews with team and league officials, social scientists, research analysts and marketing specialists who focus on Generation Z. Failing to hook young people might not devastate today’s bottom line, but it threatens to muddle the future of every league, every team and every sport.

“If you lose a generation, it destroys value and the connective tissue,” said Ted Leonsis, principal owner of Washington-based teams that compete in the NBA, WNBA and NHL. “It’s what some of the big sports leagues are nervous about. Could we lose a generation because we didn’t give them access and the products and services they want?”

While many have embraced digital platforms, leagues and teams were slow to tailor their offerings to the youngest generation, even as research made clear that Gen Z members – loosely defined as those born after 1996 – interact with the world much differently than millennials, Gen Xers and baby boomers. And these habits have taken a toll on the way they engage in sports, research shows. According to ESPN’s internal data, some 96% of 12- to 17-year-olds still identify as sports fans, a consistent figure over the past decade. But the share of fans who call themselves “avid” has been dropping, from 42% a decade ago to 34% last year. (source)

This trend is not necessarily a bad thing. It is true that some Millennials and the Zoomer generation as a whole has difficult communicating and forming interpersonal relationships, that marriage and family life is on the significant decline, and that people overall prefer solitary pursuits away from people that are not necessarily directly to a greater end, with video games being the most significant “change” in this regard. In other words, there seems to be a trend that Zoomers are more interested in watching a video game competition between “professional gamer” than they are, as it seems, in watching an actual sport competition. After all, who wants to spend mountains of money on something that is questionably enjoyable, when one can get what one wants in the privacy of one’s home while being able to enjoy oneself at the same time? This trend is essentially the same model that OnlyFans is built on and what has made it successful, providing the same content (and usually a lot less) in a personalized way in more privacy than before, except this is the sports version of the similar upcoming trend.

It will be interesting to watch, but what one may see in the future is a decline in sports as an ‘industry’ (it is unlikely to go away fully, but just contract from the overinflated monster is still is) and see the rise of ‘gaming’ as a new form of sport along with possibly other forms of yet-to-be developed virtual technologies.

Personally, it would seem that the better option is not to avoid sports, but to play them on a local, regional, or even national and international level for love of the sport but without the needless money-grabbing ‘show’ that commonly precedes them. Even better, try playing sports in a local community, for while it is not a trend, given the move towards “tribalism” and “regionalism” taking place, instead of using violence against each other, it would be worthy to see that sports, which as a trend have been used to control violence and distract people by governments across history, could provide entertainment and a healthy physical outlets in what they originally were used for once again.

What should never be forgotten is that life is not lived through sports or in the virtual world, but with and through other people, and what is meant to entertain can never become an excuse for creating a parallel reality to live in so that one might disconnect himself from his fellow man or to such a way that he forgets his duties to himself, family, and society, and instead becomes an isolated being sealed in the walls of a chamber made by his own hands.