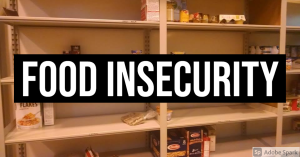 America is one of the largest, if not the largest food producer nation on Earth. Now the US is not like China, where a “food crisis” can mean not eating McDonalds or one’s preferred food, whereas in the latter a pork shortage means that people really do go hungry. However, no matter where one goes, food instability is a serious issue because people have to eat, and if they can’t eat, serious problems happen.

According to the Providence Journal, local food banks are reporting that they are overwhelmed, and 25% of Rhode Islanders now are forced to use their services because they cannot meet basic food needs.

Thanksgiving guest lists must be pared down to household members in hopes of stopping COVID-19 before it steals Christmas, but most families will still load the holiday table with abundance. They’re likely to focus on who’s missing from the table, not whether there’s enough food.

And yet an increasing number do worry about food. The pandemic that has taken almost 1,300 Rhode Island lives has also plunged people into food insecurity at a rate not seen since the Great Depression. In 2019, the number reporting food insecurity was 9.1%. This year, 25% said they were unable to provide enough food for themselves and their families.

The numbers are part of the Rhode Island Community Food Bank’s “2020 Status Report on Hunger in Rhode Island,” being released at a virtual news conference at 10 a.m. Monday.

So many people sought help from the 159 agencies distributing food that the food bank’s network sent out 30% more food in 2020 than the 13.8 million pounds it supplied in 2019, the report said.

People in lower-paying jobs are often among the first to get laid off. Those left jobless and hungry by the pandemic are more susceptible to being infected by coronavirus, the report shows.

The more people who need food, said Andrew Schiff, the food bank’s chief executive officer, the fewer there are to donate food. Businesses that have to stay closed have no money coming in, and they can’t make donations, either.

Andrew Schiff, the R.I. Community Food Bank chief executive officer, says “the largest new population, people who have been laid off because of COVID-19,” are further learning that the jobs “are never going to come back. Those families are in real trouble. They’re struggling to pay rent, pay the heating bill, and they run out of food.”

The CARES (Coronavirus Aid, Relief, and Economic Security) Act, passed by Congress in March, gave extra financial assistance to laid-off workers, adding $600 per week to their unemployment insurance compensation. These supplemental benefits ended in July, even though the economic downturn is expected to last far into 2021, the report says.

“I don’t think we’re going to get through this unless Congress approves another COVID-19 relief bill,” Schiff said. (source)

Claims such as this have not been made since the 1930s during the Great Depression. Arguably, right now the US is living through a Greater Depression, as the country has been economically eviscerated due to financialization and debt driving down the value of the money itself, and when this is combined with then fact that many jobs are going away and not returning and people do not have a real way out to make money, it becomes much harder for them to provide for basic needs. This creates a self-fulfilling cycle that spirals downward into more problems that eventually place a man who was or may have been doing well into poverty, let alone those who already are on the ‘edge’ of society and just fall into worse poverty than before.

Right now, millions of Americans are looking at losing their homes come January of next year because of the economic fallout from COVID. After all, if one has trouble buying food, how does one pay the mortgage? It is not really possible for all practical purposes, and this does not even consider issues such as paying the electric, water, gas, or phone bills.

This is part of the trend of COVID and its effects. It is not about the disease so much as it is about the effects of the disease that it will have for the long-term on others, of which as I have consistently said, the economic problems are going to be the greatest because of the unsolvable debt issues save for drastic measures, and with that more of the same patterns will continue that will likely cause a trend of increasing poverty and desperation.

The Boomers largely will be OK. Gen X, not so much. Millennials and Zoomers? Their future is going to be very difficult, and it is their frustrations at the economic situation that, as it is a historically constant trend, leads to serious political problems that can result in men seeking drastic solutions, and those generally do not end well for anybody, as this is the historical formula for how revolutions, no matter where the society is, takes place.

What is happening in Rhode Island is not a particular trend to that state. It is a reflection of a national trend that is affecting all states, and even nations, and one ignores it only at one’s peril.