You are here: Home › President Biden Fractures His Foot 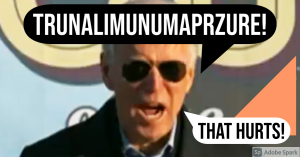 According to the AP, President Biden may literally start off his administration on the wrong foot as a report has come that he has fractured his foot.

President-elect Joe Biden fractured his right foot while playing with one of his dogs, an injury discovered in a scan Sunday and that will likely require him to wear a boot for several weeks, his doctor said.

Biden suffered the injury on Saturday and visited an orthopedist in Newark, Delaware, on Sunday afternoon, his office said.

“Initial x-rays did not show any obvious fracture,” but medical staff ordered a more detailed CT scan, his doctor, Kevin O’Connor, said in a statement. The subsequent scan found tiny fractures of two small bones in the middle of his right foot, O’Connor said.

“It is anticipated that he will likely require a walking boot for several weeks,” O’Connor said.

Fractures are a concern generally as people age, but Biden’s appears to be a relatively mild one based on his doctor’s statement and the planned treatment. At 78 he will be the oldest president when he’s inaugurated in January; he often dismissed questions about his age during the campaign.

Reporters covering the president-elect were not afforded the opportunity to see Biden enter the doctor’s office Sunday, despite multiple requests. Leaving the doctor’s office to head to an imaging center for his CT scan, Biden was visibly limping, though he walked without a crutch or other aid.

Biden sustained the injury playing with Major, one of the Bidens’ two dogs. They adopted Major in 2018, and acquired their first dog, Champ, after the 2008 election. The Bidens have said they’ll be bringing their dogs to the White House and also plan to get a cat. (source)

Now as a human being, I do wish him a speedy recovery and hope he gets better. However, this incident raises a point that many have noted, which is that Biden is old and in poor health. He has already shown signs of cognitive decline that are objectively concerning, and now that he has hurt himself, right before ascending to the Presidential office, one cannot help wonder if he has the physical and mental capacity for the highly demanding job, and that it is possible he may die in office.

This speculation- that Biden may die or “die” in office -is a real concern. Likewise, it is also curious how Kamala Harris has been so aggressively promoted, almost as much or more as Biden has been. I have proof of nothing, I can only speculate, and I mean no ill will to either, but I do not believe that I am alone in seeing this, and naturally, given that it seems like an odd thing and that there is no good way to explain it, it naturally should cause concern for investigation.

If Biden survives the next four years (forget about eight, right now just focusing on the time at hand), it will likely be a miracle. That said, if he dies and Kamala takes power, it will be not a surprise. If this happens, then the trends that Shoebat.com has warned about of the Repbulicans being able to exploit the declining economic conditions and bad political climate to remake themselves to the detriment of the Democrats will intensify many times, and with that, the political rancor from both sides could erupt into potential internal fighting between parties on American streets.

It is going to be an interesting four years.

Can A Bar Be A Church?
Trump Suggests In First Post-Election Interview That The FBI ‘Rigged’ The Election
Follow