You are here: Home › Trump Suggests In First Post-Election Interview That The FBI ‘Rigged’ The Election 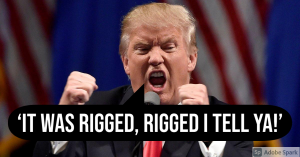 Following the election and the squabble that ensued, it is pretty clear that Biden is going to be officially designated as president. However, as the Daily Beast reports, Trump is not going out of office without plenty to say, including in his first post-election interview where he alluded to that Biden won by the FBI rigging the election against him.

President Donald Trump engaged in what could best be described as a lengthy airing of grievances on Sunday morning, venting to sycophantic Fox News host Maria Bartiromo during his first post-election television interview while baselessly suggesting his own FBI and Department of Justice were “involved” with a “rigged” election against him.

“We have affidavits from many people talking about what went on with the machines they had glitches,” Trump fumed early on, baselessly claiming they had already “caught” the machines moving thousands of votes from “my account to Biden’s account.”

He also took issue with large cities and counties in Rust Belt states voting heavily for Biden via mail-in ballots, grousing about the huge tranches of Biden votes that were reported late on Election Night and later in the week.

“This election was over and then they did dumps, they call them dumps, big massive dumps in Michigan, Pennsylvania, and all over,” he exclaimed. “If you take a look at you just take a look at just about every state that we’re talking about every swing state that we’re talking about, and they did these massive dumps of votes and all of a sudden, I went from winning by a lot to losing by a little, and in some cases, it took a period of time to do it.”

Throughout the segment, the president would repeatedly swing himself back to a handful of comfortable talking points, such as his belief that “Joe Biden did not get 16 million more votes than Barack Hussein Obama” due to a grand conspiracy to destroy him. (source)

Now as I have noted, there are a lot of real questions about the election that there are few answer to. I have reported on some of them and so have many others. This is of great concern in the objective sense. However, politics as with life is not fair, and in this case there seems to be a lot more going on for all political sides than what it appears. As I have noted, a Trump loss may be an affront to him, but as far as trends are concerned, it is potentially a great boost of support to the Republican party, because it frees them from the responsibility of the coming economic problems and allows them to focus on rebuilding themselves with a new face as well as take key gains from the critical Hispanic and Black blocs at the same time gathering the support of the white working class. Trump was helpful in boosting populism and nationalism, but he has become a personal liability at this point, and so getting ‘rid’ of Trump frees the Republicans of ‘unnecessary baggage’  that is now holding them back from pursuing greater plans, as long-term, successful politics is not about one man, but the group as a whole, and if one man becomes a burden, he is cut loose.

But let us take this a step lower, to the most common denominator for all. It does not matter at this point for the common man, speaking in a practical sense, if the FBI or anybody else rigged the election or not. What matters is that come January, Trump is out of office and Biden is in, and the nation’s problems become his problems. For the common man, it means to make preparations now so that no matter what Biden does, one can respond in an appropriate and balanced manner, because unless something major happens, Biden is going to be president.

Trump may complain all he wants, and given his current attitude, he may spend the rest of his days complaining. However, the future is to be seen. What matters is that now with him out and Biden in, with the trends of nationalism and extreme left-right polarity established, and the trends toward national violence and global political and economic instability rooted firmly into the public consciousness, it is going to be a very interesting four years, since there is no sign that the current trends are going to chance, and if they do not, there is no end for them other than in violence.