You are here: Home › African Cardinal Criticizes Black Lives Matter, Says They Are “Dismantling” Civilization While Refusing To Help Save Black Babies From Infanticide 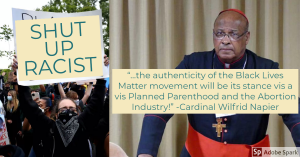 A lot of people have pointed out how some prelates in the Church have supported the “Black Lives Matter” movement. However, not only is the Black Lives Matter movement opposed to what the Church teaches in many fundamental ways, it is also destructive and not helping race relations, but sowing the seeds for conflict.

But that said, as I have noted before, there are good and bad prelates, and thankfully, there have been many good prelates who have stood up and said that it is wrong. One of the more interesting prelates who have taken a public stance is Cardinal Wilfrid Napier of South Africa, who is a black African himself, and publicly stated on Twitter that the Black Lives Matter movement is “dismantling” civilization while at the same time refuses to care about the lives of unborn black children, thus demonstrating that it does not really care about “black lives” at all, but only their usefulness for manipulating politics.

Napier, himself a black man and archbishop of Durban on the South African coast, tweeted that a “ brief study of the founding statement of ‘Black Lives Matter’ indicates the movement is being hijacked by the interests & parties committed to dismantling the very values, structure & institutions which have over the centuries undergird the best civilisations & cultures!”

Napier added, “The same test applies when assessing the sincerity of those who voice thunderous condemnation against Domestic Violence, (erroneously called “Gender based Violence) as opposed to the absolute silence concerning Violence inflicted upon Babies in their mother’s womb!” (source)

It is wonderful to see prelates such as Cardinal Napier stand up against this movement for the sake of all people, black and white.

There is a grave danger growing right now in American and also European society for persons of African descent because of this movement and others rooted in it, which in essence say that certain forms of racism are wrong while others are OK because of racism. It is just as wrong to discriminate white against black to do black against white, as it all is based on the same philosophy and goes nowhere good.

Right now there are a lot of people of “white European” descent in both the US and in Europe who feel that many migrants and persons of different ethnic backgrounds, in particular those from Africa, pose a threat to their existence. It does not matter the details of this because the feeling is present among many and the fact is that the promotion of black against white racism through media and other venues has the dangerous potential to create a violent backlash, where persons of “black African” descent could find themselves the target of not rogue violence, but organized political abuse and extermination if the white European bloc is significantly frustrated enough. Likewise, there are many persons of east Asian and, in the case of America, Hispanic and in Europe, Middle Eastern or Hindustan backgrounds who would side with the Europeans against the Africans on the basis of the same racialism.

People of black African descent need gravely to speak up and condemn groups such as Black Lives Matter” and promote peace because the more talk of “racism” that comes from many of them is not helping their situation, and since many actively promote racist ideas themselves, are only feeding the most violent racialist, darwinian feelings of the peoples who not only conquered the world and repeatedly colonized all of Africa for centuries, but ripped each other apart in two world wars in the most heinous ways possible not even a century ago in a pattern of constant, tribalistic warfare dating back to the world of antiquity.

If Germany and Poland are neighbors and have tremendous cultural overlap and a shared history, yet Germany was willing to nearly commit genocide against the Poles and experiment on them in the most horrible ways, what would Germany or other European nations do to people who are, historically speaking, very recent arrivals, have no real shared history or culture, have no real relationship between their language, look nothing at all like them, and who are watching them essentially destroy what they consider to be their homeland?

This is not a threat, but a reality check, because reality has a very difficult way of sneaking up on people and taking them by surprise in the worst possible way.