You are here: Home › Supreme Court Rules In Favor Of Religious Exemptions 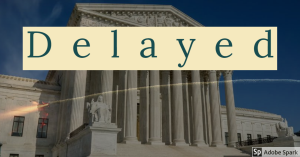 After three highly troubling Supreme Court rulings this year, what appears to be a favorable one for Christians has come out as ThompsonReuters reports after the Supreme Court ruled that organizations can have exemptions from fulfilling morally objectionable requests such as birth control.

The U.S. Supreme Court on Wednesday endorsed a plan by President Donald Trump’s administration to give employers broad religious and moral exemptions from a federal mandate that health insurance they provide employees covers women’s birth control.

The court ruled 7-2 against the states of Pennsylvania and New Jersey, which challenged the legality of the administration’s 2018 rule weakening the so-called contraceptive mandate of the 2010 Affordable Care Act, commonly called Obamacare, that has drawn the ire of Christian conservatives.

The mandate requires that employer-provided health insurance include coverage for birth control with no co-pays. Previously, many employer-provided insurance policies did not offer this coverage. Republicans have sought to repeal Obamacare, signed by Trump’s Democratic predecessor Barack Obama in 2010.

Rules implemented under Obama exempted religious entities from the mandate and a further accommodation was created for religiously affiliated nonprofit employers, which some groups including the Little Sisters of the Poor objected to as not going far enough.

The Trump rule would allow any nonprofit or for-profit employer, including publicly traded companies, to seek an exemption on religious grounds. A moral objection can be made by nonprofits and companies that are not publicly traded. The Trump administration exemption also would be available for religiously affiliated universities that provide health insurance to students. (source)

I covered this previously, and it is good to hear about this ruling, since if the court ruled against it, it would be a major step towards ending religious freedom, for if an employer is forced to submit to a morally objectionable practice in serious violation of his beliefs, and if said objection is not in itself unreasonable or without sincere and provable grounds that can be consistently documented, it results in government mandating religious beliefs.

While this is good, one can only wonder what effects it will really have, for while it will help some people, the real question for the state of religion is likely not going to be on this issue, but rather “discrimination” on the basis of homosexuality and its promotion, for the fact that the LGB and now the T has been given protection under the Civil Rights Act of 1964, it could result in future cases being brought against religious groups who employ people that may result in Supreme Court decisions far more destructive than what this one could have been.

Christians should not take this ruling as a “victory”, but rather, a lengthening of the burning fuse of American religious freedom that has not been stopped. American Christianity is living on borrowed time before serious persecution happens, as Christianity in the US is dying out with the Boomers, and the rise of aggressive secularism bears more semblance to things in the former Soviet Union than anything in the American recent past.

There is some more time, but eventually all time must be spent.

Prepare now before it is too late.

The Supreme Court Declares: Employers Don’t Have To Pay For Employees’ Birth Control
Police Hunt Convicted Felon For Stopping Car, Getting Out, And Sucker Punching A Twelve-Year Old For Apparently No Reason
Follow