You are here: Home › Yes, Russia Is Gravely Concerned About Her Population Decline 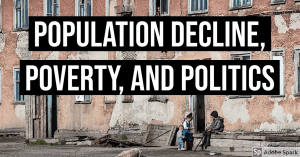 On July 15th, 2020, I reported how current population trends suggest a massive decline in births. This report has also been picked up by the Russian newspaper Pravda, which adds her own commentary, including a note that the decline will “greatly affect Russia”, as she writes:

In the medical journal “The Lancet” published a study that predicts the population in 195 countries in 2100. According to this study, the population in 23 countries, including Japan, Spain and Italy, will be reduced by more than half.

This process will greatly affect Russia. From the current ninth place in terms of population, our country will roll back to the 19th .

Leaders and outsiders
In another 34 states, including China, the population will decline by a quarter . And China from the current first place will be in third place. In the first place, according to the study of Fertility, mortality, migration, and population scenarios for 195 countries and territories from 2017 to 2100 , India will be. And on the second – Nigeria.

The study was prepared by scientists from the Institute of Health Metrics and Assessment (IHME) at the University of Washington.

Latvia has been named the “Leader” in population reduction – by 2100 there will be a 78 percent drop compared to 2017.

According to statistics, it is the African states that are assigned leadership in terms of population growth. Thus, in the state of Niger, the population will increase by 765% by 2100, Chad by 710%, South Sudan by 594% and Mali by 321%.

By the end of this century, the number of people over 80 will double the number of children under the age of five. This is evidence of how the working-age population will change.

States that scientists predict a decline in population could face serious economic problems. Moreover, the main method of solving these problems is called immigration. The encouragement of which, according to researchers, will be a necessity, not a choice .

“The XXI century will witness a revolution in the history of civilization”
According to Dr. Richard Horton , The Lancet’s editor-in-chief , “this important study has set the future,” which needs to be prepared now.

“It offers a vision of radical shifts in geopolitical power, challenges the myths of immigration and emphasizes the importance of protecting and strengthening the sexual and reproductive rights of women. The 21st century will witness a revolution in the history of human civilization,” he said.

” Africa and the Arab world will determine our future, while Europe and Asia will weaken their influence . By the end of the century, the world will become multipolar, the dominant powers will be India, Nigeria, China and the USA. It will be a truly new world for which we must prepare today, “says Richard Horton.

Of course, this is one of the predictions, and not something predetermined. Now it’s hardly appropriate to say what will be exactly as predicted in a study published in The Lancet. Although it is not worth neglecting such forecasts. (source)

The same newspaper also noted with that story that 590 thousand families received state monies for helping with childcare, something that many European nations have done to attempt to encourage people to have children, but with very limited successes. I have written many times, which you can see if you real previous articles, that Russia is suffering a destructive combination of a refusal to have children from the native women combined with the mass migration of peoples from Central Asia, emigration, and natural deaths that overall are causing her population to drop by about a million people per year and with major changes to the national demographic.

Russia is dying. There is no other way to put it, and unless fundamental changes happen, she could break up or be fundamentally transformed into a new Russia that is very different from the current Russia as she is traditionally known. This is what makes this article so significant, for while at the end there is the suggestion that it does not matter, the fact that it was published and it is said that the changes will gravely affect Russia tell everything that needs to be known- it really does matter because Russia is a large nation, and it is hard enough to manage her under the current paradigm, and it will only become harder with an aging and declining population.

The saddest part is that it does not have to happen. The process can be easily fixed by having families. The question is, does the will exist to do so?