You are here: Home › Not An Exaggeration- Russian Hackers Dump Voter Database For Michigan And Four Other States On Darknet Website 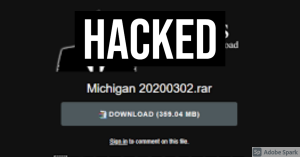 There has been a lot of talk about Trump’s collusion with the Russian government, and while there are a lot of criticisms of FBI practices, the more one observes the situation, the clearer it becomes that the FBI report is less of a political ‘hit’ and rather an expression of many uncomfortable realities that are difficult to deny. This is not to speak of potty humor and prostitutes, but about actual discussions with government officials and seemingly a desire from the government that Trump should win.

Having noted this history, it is of interest that Kommersant reports how Russian hackers on the Darknet have been caught selling the hacked data for voters from Arkansas, Connecticut, and most interestingly the three ‘battleground’ states of Florida, Michigan, and North Carolina.

On one of the Russian hacker sites, they posted databases of 7.6 million Michigan voters, as well as millions of residents of other US states. Forum users have found a way to make money on them, using the State Department’s program “Rewards for Aid to Justice”, which allows you to receive money for reporting the facts of interference in elections in the country. Other commercial ways to exploit the leak are likely to be exhausted, experts say. Some of them admit that the publication of the bases may be a provocation before the next US presidential elections.

“Kommersant” discovered on one of the forums on the darknet an advertisement for free access to personal data of millions of US residents. User Gorka9 distributes archives of Michigan voters. His message states that the files contain detailed information on 7.6 million Americans. They contain the following lines: name, date of birth, gender, date of registration, address, postal code, e-mail, voter identification number and polling station number, Kommersant was convinced. According to the author, the data is current for March 2020. The InfoWatch Group of Companies “Kommersant” confirmed the authenticity of this database, specifying that it initially “leaked” at the end of 2019.

Its victims were not only Michigan residents. Kommersant also discovered the distribution of databases of voters of the states of Connecticut, Arkansas, Florida and North Carolina at the site. Each of the archives contains from 2 million to 6 million lines. Voter bases are not limited to. The same hacker also sells the personal data of 62,000 patients at the Brooklyn Center for Surgery in New York.
Forum users have already found a way to monetize information about American voters that does not require any specialized skills. To do this, it is proposed to use the US Department of State program “Rewards for Justice” (Rewards for Justice). (source)

Now to be clear, this is not to say that a government is behind this because there is no proof of such a statement. In fact, given how there is talk about how these hackers were stealing the data to report it to the US and collect a reward, it seems like a very “Russian” or more generically, Slavic type of scammer activity.

Who are these hackers specifically? No one actually knows. It could be a plant. It may not be a plant. There is no way to prove it. However, the history of Trump with Russian ties and now such voter data from three sensitive states showing up on a Russian darknet forum is very suspicious.

It will be interesting to see what further revelation may come out from this story.