You are here: Home › Michael Moore Is Absolutely Right, Trump Has A Strong Chance Of Winning 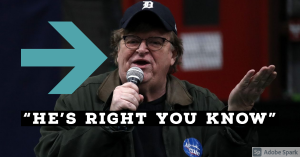 Michael Moore is a person who many love and many hate. But regardless of what one feels about him, something that cannot be denied about him is that Moore has his finger close on the pulse of American society, and he has a deep understanding of how Americans act as a people. It is for this reason that as the New York Post notes, Moore made the statement that Trump will likely win in the 2020 election based on current trends in spite of the line that he will not win.

Lefty filmmaker Michael Moore said President Trump is enjoying “off the charts” enthusiasm and could pull off a repeat of the 2016 election — and the commander in chief agrees.

“Michael knows!” Trump wrote on Twitter Sunday morning, and linking to a story about Moore’s comments.

“Are you ready for a Trump victory? Are you mentally prepared to be outsmarted by Trump again? Do you find comfort in your certainty that there is no way Trump can win? Are you content with the trust you’ve placed in the DNC to pull this off?” he said, referring to the Democratic National Committee.

The “Bowling for Columbine” director, saying he wanted to “provide a reality check,” pointed to polling in the swing states of Minnesota and Michigan to show that Trump is catching up to Democratic presidential nominee Joe Biden two months before the Nov. 3 election.

“I’m warning you almost 10 weeks in advance. The enthusiasm level for the 60 million in Trump’s base is OFF THE CHARTS! For Joe, not so much,” he said.

He then made a plea to his followers to vote Trump out of office.

In this case, Moore’s analysis is absolutely accurate, for the chance of Trump winning is very high. The reasons are many, but as we have noted, (a) there is a strong chance of an “October surprise” type event regarding COVID-19, and more importantly, (b) Black Lives Matter has been, like what ISIS was in 2015, the biggest helper for Trump’s election campaign.

Honestly, if one wants to win an election, does one place (for the Democrats) an old man with a mind showing signs of dementia, with a woman as a Vice President who is not merely unattractive in her facial appearance, but has a history of making racially-charged statements, at a time when a curious group that “just so happens” to appear at major election years comes up and “just so happens” to start major riots throughout American cities, destroying property, harassing people, and even murdering people in the name of ‘racial justice’ while being openly racist themselves, and the police just curiously happen to stand down throughout most of it?

Now Moore is not discussing anything to do with strategies of tension, which is what Ted, Walid, and I have noted consistently on Shoebat.com is a major trend in this election, as what the US does to other nations is now coming back upon her. That said, what we can say for this situation is that if Black Lives Matters’ intention was to get Trump elected (like what ISIS did in 2015), it is certainly working.

If you are a black person, do you really want to be associated with a group like Black Lives Matter if you take a good, hard look at them?

If you are a white person, do you really feel the same way, as well as people of another racial background?

People do not want to be associated with people who are engaging in what appears to be purposeless violence, not just for their own safety and their property, but because it is just wrong and there is no way to deny it. There will be those who do such things, but most people want to live normally and not cause trouble, and when a group like this ‘appears’, while there may be some who initially support their cause out of the same good will, that can quickly turn if violence becomes the means by which the protesters choose primarily to express their grievances.

BLM is also great for the Democrats, because it will given them an excuse to do ‘reforms’ in their own party in the coming years. Indeed, one may likely see not the death of the Democrat party, but a complete renewal into a more powerful and dangerous form but with the same philosophies, albeit expressed by men in suits that people want to associate with instead of pink-haired and screaming lunatics.

What Moore is observing about the likelihood of a Trump victory is not hard to see if one removes the partisan glasses that we are all accustomed to looking at politics through. He certainly has his views- this is not to say that one should not have an opinion -but his assessment is in a sense probably the most ‘non-biased’ in this case from a liberal perspective. He wants a Biden victory, but just like how Shoebat.com has discussed our position about Islam and the ties of the anti-Islam movement to ultranationalism and eugenicist groups, Moore also is being honest with his own base in expressing an uncomfortable reality.

With scarcely two months to the election, it seems much clearer now that Moore’s words are those not of a ‘prophecy’, but a man looking at reality and saying what it is even when people would rather not believe it.

Not An Exaggeration- Russian Hackers Dump Voter Database For Michigan And Four Other States On Darknet Website
Germany Tells China To Stop Threatening European Nations, Says That Europe Will Stand Up For Her Interests
Follow