You are here: Home › Evil Drug Cartel Terrorist Cuts A Man’s Chest Open As He Gurgles In Pain, Rips His Beating Heart Out, And Eats It Raw While Laughing At His Victim 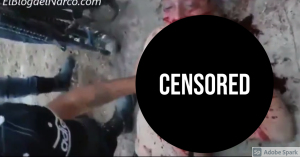 Ted, Walid, and I have been warning for years about the CJNG and how as a part of becoming a member, cannibalism is a requirement now. This is not an exaggeration or a joke, and some videos of this practice have come out.

However, in a shocking new video published on El Blog Del Narco, it shows a CJNG member murdering a man and then sawing his chest open, ripping out his beating heart, and eating it.

A shocking video has emerged in social networks of when an alleged hitman of the Jalisco Nueva Generación Cartel (CJNG) eats a human heart.

As they reveal, the victim would belong to the Tepalcatepec Cartel, a rival group. In the video (which was not decided to show due to the high content of violence) the criminal appears who removes the person’s organ and eats it. Media have said that this would have happened in Michoacán, although there is no precise information at this time.

The recording began to circulate on the Internet since last Saturday, August 22. «So they can see that we are the Jaliscos! We are going to exterminate them, all the tepeques! Pure four letters! Pure Mencho people! Pure New Generation ! ”Shout the CJNG hitmen who appear in the video .

This is not new, because in 2017 it was announced that to belong to this group of drug traffickers, the initiation consists of eating human flesh . The Prosecutor’s Office of Tabasco, in that year said that the criminal gang was recruiting young people between 12 and 18 years old, and as a form of training they are forced to eat meat from their victims.

The CJNG has been one of the criminal organizations that have grown the most in Mexico, according to analysts. The Attorney General’s Office (FGR) estimates that its presence is consolidated in 28 of the 32 states of the country.

It may interest you: They arrest six hitmen from the Northeast Cartel in Camargo, Tamaulipas

The US Drug Enforcement Administration (DEA) notes that the cartel has also expanded abroad , “with a significant presence not only in the United States and Mexico, but also in Europe, Asia and Australia.” (source)

WARNING: THIS IS VERY VIOLENT AND GORY.

IT IS NOT FOR THE FAINT OF HEART AND NOT FOR CHILDREN.

YOU HAVE BEEN WARNED.

Now I have said this before and I am going to say this again.

Consider yourself the average Jose. You are a normal person living a normal life. You go to work, raise your children, and like to have a view cervezas with your amigos on the weekends. Life is good for the most part.

But then these monsters come to your area. You are not a rich person, you are not a person of interest, and you leave people alone.

Do you really want to live around these people? Would it make you feel comfortable to know that these evil men are in your neighborhood? Would it also help to add that the police will not provide any assistance if they do something bad, and if for some reason one of the members of this drug group makes a demand and you do not comply with it, that you could end up being the victim just like what happened in this video?

You know too that if you walk about fifteen hundred miles- walk, bus, car, it does not matter -you can have a brand new life, completely free from these people. Crime will not go away, but there will be a legal system that will hunt down and arrest people like this. You can go to work knowing that you will most likely come home. Also, you know that you will make a lot more money than what you make right now.

Would you take the risk? Would you leave everything behind and make the journey? Would you care if people were mad at you for doing this?

Watch this video, and think about the people who have to live near these evil men and what must go through their minds each night, for they are just as human as you or I, and while most of us do not have to live near such men, they are forced to.

It is very easy to say, “Look at those (insert name of group here), they should not come here”, without really taking a hard look at what people are forced to go through.

It is important to maintain law and order- such is justice -but justice can never be complete without mercy, especially for those who are forced into situations they never wanted to be a part of.

Ammonia Emerges As A New Possible Fuel
Economic Indicators Tell The Obvious, The Services Industry Is Not Recovering
Follow