You are here: Home › US Debt Will Officially Exceed The Size Of The Economy 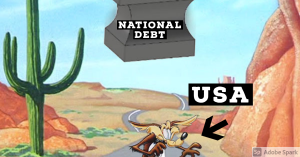 It has been known for years that the US debts well exceed the size of the US economy. This is a dirty ‘secret’ that has been discussed many times by men such as the economic John Williams on his website ShadowStats. However, by the official number crunching process, where books are conveniently ‘cooked’ and modified, for a long time the US has been able to give the appearance that things are OK and her debt levels are lower than what they are. This is done largely to justify, in an official way, the ‘stability’ of the US dollar to prop up the world economic machine and keep the US in a politically dominant position.

However, there is only so much manipulation that one can do until economic realities are forced to the surface, such as with what the Wall Street Journal is reporting, where for the first time since the Second World War, US debt obligations will officially exceed the size of the economy.

U.S. debt has reached its highest level compared to the size of the economy since World War II and is projected to exceed it next year, the result of a giant fiscal response to the coronavirus pandemic.

The Congressional Budget Office said Wednesday that federal debt held by the public is projected to reach or exceed 100% of U.S. gross domestic product, the broadest measure of U.S. economic output, in the fiscal year that begins on Oct. 1. That would put the U.S. in the company of a handful of nations with debt loads that exceed their economies, including Japan, Italy and Greece.

This year the ratio is expected to be 98%, also the highest since World War II.

The surge in borrowing so far isn’t creating angst among investors or hampering the U.S.’s ability to borrow more. Investors have gobbled up U.S. Treasury assets, drawn to their relative safety. Moreover, interest rates are expected to remain low, suggesting the government still has plenty of room to borrow.

The yield on the benchmark 10-year U.S. Treasury fell Wednesday to 0.643%, from 0.672%, in line with a broader rally in financial markets. Bond yields fall as prices rise.

The U.S. passed the 100% debt-to-GDP mark, measured on a quarterly basis, in the April to June quarter, when government spending surged to combat the new coronavirus and tax revenue plunged. But this would be the first time in more than 70 years for it to do so for the federal government’s full fiscal year.

The last time the U.S. debt level exceeded economic output was in 1946, when it stood at 106% after years of financing military operations to help end World War II. (source)

During the Second World War, one should remember that the economy was buoyed by the domestic production of goods for war. This is not the case any more, as now there is no manufacturing tier for the most part, but a large service tier, and with the continuing evisceration of the economy by way of outsourcing, a declining job pool, technological innovations, and an unwillingess to pay people a wage that is barely liveable, there are a lot of financial problems, including the inability to service the national debts.

This was always bound to happen because of economic realities, but it is just that what was spoken of in the past is now coming to pass. We are living now the warnings of the historical past, so this is not something new happening. This is also a reason why I have said constantly to prepare for the future because things are going to get much more difficult as fundamental economic realities are exposed and have to be dealt with.

Zero Hedge recently reported that based on estimates from the Congressional Budget Office, US debt obligations will rise and then “explode” around 2023, prompting the possibility of an economic collapse, and possibly even a collapse in the currency.

2023 is also an interesting year, because it is leading up to an election year.

Now I cannot for sure say what the future is, but here is a series of possibilites.

Would it not be interesting if a major financial crisis started around 2023?

Would it not be interesting if Trump, given his history of bankruptcies, found himself at the center of the bankrupting of the United State, just as he is leaving office, and the Democrats and Republicans prepare to fight?

Would it not be interesting if chaos on a scale of Weimarianesque proportions happened?

Would it not be just the most interesting of timing as well?

What I am saying here is that we may be getting right now, three years out, a look into the future, for while the future is always in motion, it is events such as these and reports that help to shape our view on possibilities.

Put the political party blinders aside, no matter what the party is, and take these numbers for what they are.

Financial chaos is coming, and has been engineered for a long time for political gain. Economic crises almost always precede major political crises and war, so likewise, be aware of that as well, and considering how Europe is showing signs that she wants to ‘rise’ again, a major crisis in the US is an opportunity for fighting and this to happen.

2020 is far from over, for if we are looking at the decade, this is further evidence to support this will be a time of destabliization and radicalism that will culminate in a war.

Germany Tells China To Stop Threatening European Nations, Says That Europe Will Stand Up For Her Interests
Ammonia Emerges As A New Possible Fuel
Follow