You are here: Home › Germany Tells China To Stop Threatening European Nations, Says That Europe Will Stand Up For Her Interests 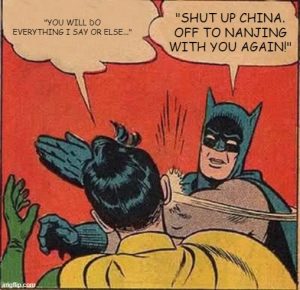 China has been attempting to assert herself around the world, and in typical Chinese fashion, thinks she can bully smaller nations. But she may have gone too far as Business Insider reports that Germany is standing up to China after the Asian nation made threats against Czechia.

Germany has told China to stop threatening Europe after Beijing said a politician from the Czech Republic who visited Taiwan this week would pay a “heavy price” for expressing support for the self-governing island facing Chinese subjugation.

Milos Vystrcil, the president of the Czech Senate, infuriated China by becoming one of the few senior European Union politicians to visit Taiwan. He told its parliamentarians “I am a Taiwanese,” in what was interpreted as a reference to John F. Kennedy’s anti-communist “Ich bin ein Berliner” speech of 1963, The Times of London reported.

President Xi Jinping wants to reclaim Taiwan, a self-governing country in Southeast Asia, after it broke away from China in the mid-20th century. China has said it is prepared to retake the island by force, if necessary.

On his visit to Taiwan this week, Vystrcil said: “I am convinced that it is the duty and obligation of every democrat to support all who defend democratic principles and who often find themselves building democracy under difficult conditions.

“I wish you an independent, true and just future. It is in your hands.”

Heiko Maas, the foreign minister in Chancellor Angela Merkel’s government, on Tuesday stood up for Vystrcil, telling his Chinese counterpart, Wang Yi, that “threats have no place here” and that Europeans stood together “shoulder to shoulder.”

“We treat our international partners with respect and expect them to do precisely the same in return,” he said.

Speaking after his meeting with Wang, Maas said Europe would not back down and allow itself to “become a political football in the great-power rivalry between the US, Russia, and China.”

“At the moment I am trying to make it clear to everyone I talk to … that they must brace themselves for Europe to represent its interests more confidently,” he said in comments reported by The Times of London.

In a sign of Germany’s hardening position toward China, Maas used his meeting with Wang to urge Beijing to remove the draconian national law it recently imposed on Hong Kong and allow United Nations officials to observe the treatment of detained Uighur people in China, the report said. (source)

There is no nice way to say it- China is being just stupid right now, because in classical Chinese fashion, her attempts to influence the world and make “her mark” are not drawing people into her influence, but making them hate her. Instead of looking powerful, China looks like a bully trying to boss people around. As I have said before, the Americans and Anglos are masters of lying and often can bluff, Russians cannot lie but are the masters of bluffing (better than the Americans and Anglos), and the Chinese can neither lie nor bluff, and when they try convince no one except that they are a bin of power-hungry lunatics who can barely control themselves.

Going into Czechia- a historical area of German influence -and making threats is a very bad idea. One need only recall that it was less than a century ago that said Germany started two major world wars and was in the process of splitting the atom, opening up a whole new generation of warfare. Likewise, as we at Shoebat.com have pointed out, Germany has been heavily involved in the next phase of war research, which is AI. She has always been a militaristic power, and while people may say “stupid Germany”, she uses this to conceal her true intentions. But she is not stupid, she is not weak, and she could militarize very fast if she wanted to, and if she believes that a person is truly trying to threaten her sphere of influence, she will do something about it.

You just don’t go into Germany’s backyard and start telling people there how to act. This would be like a Tai-Chi “master” picking a fight with, for the sake of example, a German MMA fighter. It’s not going to end well for the Chinese opponent.

This right here is the story of Chinese history. Specifically, in both examples, China is the losing side.

China’s impression of her military is also very overrated. One can recall that recently, in a battle of incompetence, India beat China in a skirmish in the Himlayas with twenty Indians dead but forty Chinese dead. Even India, whose incompetence and mismanagement is known around the world, can still trounce China in a serious military fight.

As I have also said before, Russia will NOT help China because she does not want problems with Siberia, and would be more than happy to cut a deal with Japan like she has done with China. To anger Germany now will not serve China’s interests, and not only will make her not want to help China, but will fuel a desire to do what she has done in the past of helping Japan with her invasion and destruction of China. Southeast Asia also hates China, and will not care if she is conquered.

Shoebat.com has warned that Europe is going to try to stretch her “military muscle” around the world, and make herself a collective competitor with the USA and Russia. She may have her disagreements with both, but something that she is not going to accept at all is abuse from the Chinese, and the USA and Russia will also stand with her on that. They will fight with each other later, but at the very least, will work together to fight against China, or to see that she is torn to pieces.

At this point, China would be wiser to be quiet, be humble, and work diligently. She will already face many nations in a future war, and she will need any help that she can get, but it is likely that she will ignore this, and it will be her pride and arrogance that will lead to her undoing and likely another repeat of the horrors of Nanjing.

Michael Moore Is Absolutely Right, Trump Has A Strong Chance Of Winning
US Debt Will Officially Exceed The Size Of The Economy
Follow