You are here: Home › The Atlantic Doubles Down On Trump Veteran Insults, Promises More Revelations 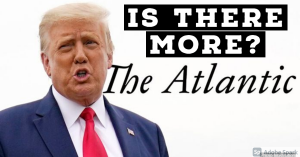 The Atlantic recently generated controversy by claiming that Trump made disparaging statements about veterans. In response to criticism, The Atlantic is doubling down, saying that it told the truth and that it has more to expose on Trump of a similar theme.

Jeffrey Goldberg, editor-in-chief of The Atlantic, said his magazine’s story about Trump calling Americans who died in battle “losers” and “suckers,” was just the tip of the iceberg.

“I would fully expect more reporting to come out about this and more confirmation and new pieces of information in the coming days and weeks,” Goldberg told CNN’s Chief Media Correspondent Brian Stelter on “Reliable Sources” Sunday. “We have a responsibility and we’re going to do it regardless of what he says.”

The magazine received backlash — from Trump and many others — for attributing the information to four anonymous sources. CNN has confirmed several aspects of The Atlantic’s reporting, also with sources who chose to remain anonymous.

But Goldberg said that’s how the media is able to do its job of uncovering stories that take place behind closed doors.

“We all have to use anonymous sources, especially in a climate where the president of the United States tries to actively intimidate,” Goldberg said of his editorial decision to cite nameless people. “These are not people who are anonymous to me.”

Carl Bernstein, the investigate reporter known for breaking the Watergate story that took down President Richard Nixon, told Stelter on Reliable Sources Sunday that anonymous sourcing is often a crucial tool for reporters.

When it comes to the current presidency, Bernstein said, “We have to recognize that almost everything we know about the truth of Donald Trump and his presidency comes from reporting,” adding, “The fake news is the president’s news,” and journalists are “doing the real reporting.”

On Sunday, Trump fired back at The Atlantic, directly attacking its majority owner, Laurene Powell Jobs.

“Steve Jobs would not be happy that his wife is wasting money he left her on a failing Radical Left Magazine that is run by a con man (Goldberg) and spews FAKE NEWS & HATE,” Trump tweeted. “Call her, write her, let her know how you feel!!!”

Goldberg shot back at Trump, saying that the magazine will continue to report on his administration.
“We’re not going to be intimidated by the President of the United States. We’re going to do our jobs,” Goldberg said. (source)

It is true that anonymous sourcing can be abused. However, as noted, it is also a critical tool in certain cases for investigations where the situation is difficult for any number of reasons.

As I noted, we really do not know the details of the claims other that “he-said-she-said”. However, as I noted, the particular details are consistent with previous styles of speech and similar statements made by Trump.

It will be interesting to see how this story progresses, and how people respond to it.