You are here: Home › Jailed Mexican Drug Trafficker And Butcher El Chapo Complains That Life In Prison Is “Torture” Because He Has To Sit In A Cell All Day And He Feels Depressed, Says The Treatment Is “Unfair” And Is Demanding A Retrial 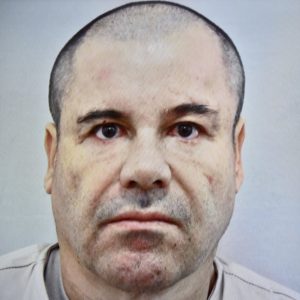 Joaquin Guzman, known as El Chapo, was an infamous drug traffickers whose reign of horror has come to an end in an American prison cell. El Chapo became famous for having people tortured to death in horrible ways, and he even paid a doctor on staff to keep his victims alive so they could be tortured longer. El Chapo also was known to personally torture people to death.

However, now behind bars for the rest of his life, El Chapo is preparing to try and get his case tried again, saying that he was convicted unfairly, and because of that and the conditions of his imprisonment in a Supermax prison, he is being tortured at El Blog Del Narco reports.

María Colón, one of Joaquín “El Chapo ” Guzmán’s lawyers , spoke about the reasons why the Mexican drug trafficker appealed the life sentence on Friday .

“They were conditions of torture”, the 2 key arguments for Chapo to present his appeal

To which he was sentenced in July 2019, in a legal movement with which they hope to reverse his sentence. The member of the Mexican drug lord’s defense team assured that irregularities had been committed since the extradition process, since “he should have been taken to the Western District of Texas or the Southern District of California” and not to the Eastern District of New York.

“We are also appealing the conditions that Mr. Guzman was in when he was still detained under a presumption of innocence and they were conditions of complete torture,” Colón said in an interview with the Narco Blog. The lawyer explained that due to the pandemic, visits and communications with “El Chapo ” have been limited and that the head of the Sinaloa Cartel is depressed.

“I notice him a little depressed, I can see how the effects of solitary confinement for more than three years have begun to affect him,” said Colón.

“It has been torture 24 hours a day,” Guzmán himself indicated on the day of his sentence.

According to the lawyer, Guzmán has not seen his twin daughters since December 2019 and maintains limited communication with his wife Emma Coronel. “(She) is also pending the appeal process and from time to time she also asks us and we keep her informed.”

El Chapo has lived in the Maximum Security Administrative Penitentiary (ADX) or known as “Alcatraz of the Rockies”, in Colorado , since July 2019.

Just over a year after being imprisoned in a cell where he eats and cleans himself, the Coronavirus pandemic has caused some changes in the life of this Mexican prisoner who will have to spend his entire life and 30 more years after being sentenced in the United States for 10 crimes.

Prior to the arrival of the coronavirus in the United States, the founder of the Sinaloa Cartel had a routine that consisted of spending 23 hours in his cell and then going out for an hour to sunbathe and some fresh air , according to the Univision network . The exit was a kind of cage.

However, despite the fact that the Mexican drug trafficker was sentenced a year ago to life imprisonment ; he has one last trick up his sleeve.

This Friday, the capo’s lawyer, Marc Fernich, filed a 245-page appeal of his federal conviction in Brooklyn (USA), most of it under seal. New York Times journalist Alan Feuer, who has closely followed the criminal leader’s trajectory, released the ten arguments for the retrial.

The first deals with the extradition of Chapo to the United States, in 2017. According to the defense of the drug trafficker , the delivery of the latter to the United States government was made based on false, misleading statements and omissions. El Chapo , before being processed, would have an agreement with the Mexican authorities to be tried in California or Texas.
His harsh preventive detention prevented him from collaborating in his defense before and during the trial.

Prosecutors were allowed to present too much evidence of graphic violence that would prejudge the jury. At this point, the lawyer states that the testimonies of former partners of ” Chapo ” created a negative judgment in the jury, before having sufficient data.

4-5. US investigators violated Guzmán’s rights by spying on him and secretly collecting his text messages and phone calls.

The trial judge issued a series of erroneous evidentiary rulings.
The judge did not fully investigate media reports that Jeffrey Lichtman, the lead attorney for the leader of the Sinaloa Cartel, was involved in “criminal activity.” According to Feuer, this point could refer to statements that Lichtman had an affair with one of his other clients.

The court never allowed Guzmán to argue that the government was biased in persecuting him.

It challenges the integrity of the jurors, some of whom showed up after the trial to say they didn’t follow the rules.

The American journalist clarifies that the last point is the most interesting in the appeal process:

The attorney asked that another judge investigate whether the prosecutors and the trial judge engaged in inappropriate secret communications and whether there was “an undisclosed shadow attorney arrangement .”
It may interest you: Violence in Celaya, the CJNG was attributed the execution of a 60-year-old woman

Mariel Colón Miró assured the AFP news agency that the trial must be annulled, since one of the jurors told the Vice News news site that he and other judges learned about the case in the press and social networks during the process. , something that was prohibited. (source)

Tell this to his victims and their families, and the communities he was in.