You are here: Home › Mom Asks For Crisis Intervention With Her Thirteen-Year-Old Autistic Son, Police Come And Shoot Him Multiple Times 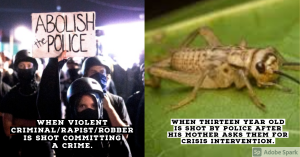 There has been much criticism about the police overuse of force. I speak not of cases where it is clear that force is justified, but in cases where discretion is necessary, and clearly obvious, deadly force is used without balance to the situation. Such an example seems to have taken place in Utah, where a thirteen-year-old autistic teenager was shot multiple times by police after his mother called asking for a crisis intervention team in helping to de-escalate her son’s reactions.

A 13-year-old autistic boy is still recovering in the hospital after getting shot several times by police on Friday night in Glendale.

Linden Cameron had injuries to his shoulder, both ankles, intestines, and bladder, according to his mother, Golda Barton.

As an officer-involved shooting investigation is underway with the Salt Lake City Police Department, the boy’s mother told 2News what happened.

Barton said she was the one who called the police and asked for a crisis intervention team (CIT). She said her son, who was Asperger’s, was having a mental breakdown. She spoke briefly about how she was told how the CIT would respond:

This is how to deal with people with mental health issues. So, you call them, and they’re supposed to come out and be able to deescalate a situation using the most minimal force possible.

She explained to the CIT that her son was having a mental breakdown and needed to be transported to the hospital for treatment. It was the first day Barton had returned to work in almost a year because she can’t be away from her son: “he has bad separation anxiety,” she explained. On the phone with officers, Barton told officers the best way to approach her son:

I said, he’s unarmed, he doesn’t have anything, he just gets mad and he starts yelling and screaming. He’s a kid he’s trying to get attention, he doesn’t know how to regulate.

She said she was to stay while the two officers went through the front door of the home in the area of 500 S. Navajo Street in the Glendale neighborhood. She said in less than five minutes, she heard “get down on the ground” and several gunshots were heard.

She thought her son was dead and the officers didn’t immediately say if he was or was not dead. They handcuffed him, according to Barton. Additionally, she said she heard from someone that the other officer could be seen grabbing his own head in disbelief for what had happened. He said out loud, according to what the mother was told, “He’s just a child, what are you doing?”

This account of what happened is all according to Barton. SLCPD said police were called to the area for a report of a “violent psych issue” involving the juvenile “having a mental episode” and “making threats to some folks with a weapon.”

Sgt. Horrocks did not say whether a weapon was located. He said he knew of no indication that there was a weapon found but didn’t know for sure. According to police policy, the shooting will be investigated by an Officer-Involved Critical Incident protocol team, which was already on scene Saturday morning. Salt Lake City Mayor Erin Mendenhall released a statement on Sunday that read:

While the full details of this incident are yet to be released as an investigation takes place, I will say that I am thankful this young boy is alive and no one else was injured. No matter the circumstances, what happened on Friday night is a tragedy and I expect this investigation to be handled swiftly and transparently for the sake of everyone involved.

Cameron’s father drove down from Iowa immediately after he heard the news on Friday night. He was present in the interview. “He an amazing father,” the mother explained. Besides the two of them, Barton said she has no family support in the area. The family only received one card, according to Barton.

Barton showed much appreciation for those who wrote in the card and called it a nice surprise: “We are used to being alone.”

Briefly, Barton explained her family faces tragedy after tragedy. She called this incident the tip of the iceberg. She explained Nevada police shot her father in January 2020 – 2News has yet to confirm this fact as of Sunday evening. (source)

Now it is true that a teenager is almost a full-grown adult. They can do violence and they can be strong and hurt people. This is not a joke. Contrary to what is said, he is not a “baby”, and the promoting of this attitude is not helpful to anybody.

However, based on what evidence we have, there is a lot which demonstrates, on behalf of the police, a ‘shoot-first-justify-later’ approach that here is completely unbalanced.

First, look at the teen. He is a teenager, but does not show signs of possessing abnormal strength. This is immediately visible from photos of him. It would be hard to say that he could physically subdue a strong police officer, let alone two or three, for it is known that even the most violent and strong criminals are easily overpowered by a small group of policemen. It would be difficult to say that a teen was so violent and dangerous in this context that he could not be physically subdued in a safe manner and needed to be shot.

Second, and most importantly, his mother called police for specific help about crisis intervention. This is a frequent thing used in social services with people who have a condition and need to be subdued. I speak as one who has done crisis intervention involving people threatening attacks or attacking people with fists, objects, or even knives, and physically attacking back, separating, and subduing people with force to prevent them from harming someone or their own person.

I can say as a matter of fact that never once- even when dealing with people armed with knives and making threats, or violent assaults, did I ever believe that anybody needed to be shot with the intention to kill, because unless one is using a taser or rubber bullets, that is why one shoots somebody- to kill them. Some people needed a lot of help, but NEVER can I think of a reason- other than a serious and aggressive attack repeatedly with no way to stop it -that one needs to shoot somebody (this includes the knife situation, which was de-escalated peacefully).

This is an example of true crisis intervention of a man making threats with a knife in Thailand at a police station. This is exactly the sort of situation I dealt with years ago, and it just about ended the same way.

If this same situation happened in the USA with “law enforcement”, it is very likely the poor man would have been shot to death and police would justify it as “protecting the public” because “he made threats”. I am not saying that police are not under a lot of stress and have to make quick decisions at a moment’s notice- I had to in crisis intervention -but that is part of the job, and if one is not responsible enough to handle the job, then one needs to get another job.

I want to know EXACTLY what the justification for shooting a skinny thirteen-year-old with autism needing a crisis intervention was, in specific detail, because while I do not know the details, I am almost absolutely sure there is no justification in this situation for this.

Third, since the police attempted to claim that the teen was ‘threatening’ with a ‘weapon’, we need to know EXACTLY what the ‘threat’ was and what the ‘weapon’ was. A person having a mental breakdown with a medical condition yelling random things and even throwing or using objects is almost never a reason to shoot somebody. I can remember many times having things thrown and swung at me and my co-interventionists, but again, nothing that could justify attempted murder.

Yet where are the protests? Where is the anger? The only sound is crickets. Instead right now, there are a lot of people, and clearly for political reasons, trying to justify criminals and blame police for doing their jobs in examples such as:

One cannot say this was the case here. This was the case, from what we can see based on the evidence presented, of an autistic teenager having a breakdown that his mother asks for police help with, and instead of getting help, her son nearly is killed and the department is trying to justify the shooting.

This shooting is perhaps even more egregious than the Daniel Shaver case, where Daniel Shaver was shot to death on camera by a police officer, Philip Brailsford, amid a series of contradictory requests made while being detained, and it having come out at trial that Brailsford had a history of complaints against him for abuse and on the side of his police rifle he had written on it the phrase “You’re f*cked”.

I am not saying that all police are bad, or any nonsense about “”#Defundthepolice”, as such things are ridiculous and help nothing either as a practical solution or for principle.

What I am saying is that such examples of- as it appears strongly to be here -true police abuse are not dealt with, while that which is considered to be politically advantageous to exploit and is not abuse is called as ‘abuse’.

This case is just one example of this problem, and so little care given to it.