You are here: Home › Australian Province Passes Law Jailing Priests Who Do Not Report Claims Of Child Sexual Abuse 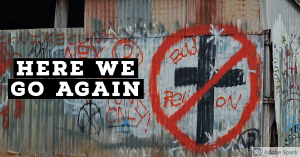 Anti-clericalism has never died, but now it is back in fashion again as the Australian province of Queensland passed a law ordering priests to break the seal of the confessional in cases of alleged child sexual abuse or go to jail.

Priests in Queensland will now be compelled to break the seal of confession to report child sexual abuse or face three years in jail.

The law was passed with the support of the Opposition

It enacts a recommendation of the child sexual abuse royal commission

New laws passed through Queensland Parliament will force members of the clergy to report known or suspected cases of abuse to police.

The legislation means religious institutions and their members are no longer able to use the sanctity of confessional as a defence or excuse in child sex abuse matters.

“The requirement and quite frankly the moral obligation to report concerning behaviours towards children applies to everyone everyone in this community,” he said.

“No one group or occupation is being singled out.

The laws apply to information received from now, even if it relates to abuse that occurred in the past.

The law was supported by the Opposition.

‘They will go to jail before obeying’

But One Nation MP Stephen Andrew said it set a dangerous precedent for religious leaders.

“The bill poses a real danger for public trust and cohesion in our community,” Mr Andrew said.

“Many priests and bishops have publicly stated that they will go to jail before obeying these laws.

“How confident can the people of Queensland be that they live in a free and open democracy governed by the rule of law, where the state jails its bishops?”

Members of the Catholic Church in Queensland have previously voiced their opposition to the laws.

Earlier this year, Brisbane Catholic Archbishop Mark Coleridge told the ABC he believed breaking the confessional seal would “not make a difference to the safety of young people”.

Hetty Johnston from the child protection group Bravehearts expressed her support for the new laws.

“I don’t think there is enough jail time in the world that would replace a child’s innocence … what sort of punishment is suitable for someone who would allow that to happen?

The laws enact recommendations of the Royal Commission into Institutional Responses to Child Sexual Abuse.

The passing of the law also coincides with Queensland child protection week. (source)

This law is awful, because it is not about sexual abuse. Indeed, if the Anglosphere cared at all about sexual abuse, then the Jimmy Savile’s and Jeffrey Epstein’s of the world would not be “dead” or revelation would not come out after real death, and their “clients”, or basically a large bloc of the political and economic “leaders” would not be associates or clients of either the US or UK Commonwealth (which includes Australia and Canada) power structure, and they would surely not be such open defenders of sodomite behavior.

Almost two decades of studies consistently confirm what has been said- the Catholic Church does NOT have a sexual abuse problem. It has a problem with sodomite infestation into her ecclesiastical ranks, since male-on-male sodomite abuse constitutes 80% of all cases, of which about two thirds of those cases are of teenagers.

The seal of the confessional is probably the second most sacred thing in the Church after the Eucharist. It is an inviolable covenant between man and God with the priest acting as the intermediary whereby a man opens himself up to God to confess his sins to Him. It is not “magic” from the priest, but the grace of God working through him, because man cannot forgive sins as only God is able to do this.

This law is saying that the confessional seal has to be violated. Even worse, it puts the priest in a particularly awful position because a person can make a claim- a false claim -of sexual abuse, and the burden of proof is on the priest to say what was or was not said in the confessional, and to identify particular persons. If he does not, then he cannot defend himself, and he will be found guilty.

The priest is in either case forced to break the confessional seal or go to jail. All it would take are some people of highly evil intentions to make false accusations to send squads of priests to jail with no way to defend themselves.

Ask yourself, would the Jews be forced to accept such a law? Would the Moslems be forced? How about any other religion or religious group? They would not, for all that would need to be made is the whining voice of cries saying “TOLERANCE” and “RELIGIOUS FREEDOM” and it would be rescinded. But not Christianity, and certainly not the Church, since she is seen as not only a “legitimate” target, but if the Church is suppressed, all of Christianity inevitably goes down because she is the largest and strongest.

This is a war of the Anglosphere against Christianity and Christ, and knowing the history of the Anglosphere- just as how the Protestant revolutionaries in the UK treated Catholic people in England, Scotland, Wales, and later in mainland Ireland with the famine, it is without doubt that thorough, “legal”, aggressive, and merciless attempts will be made to completely eradicate the Church and her influence.

This is also coming to the rest of the Anglosphere and the world, in the name of the same “tolerance” and “freedom’.

One should take this as a warning for the future. To that, now is not the time to expand into society, but to, from a pragmatic approach to this, pull back and consolidate. Indeed, it is important to help people, but one will have to use one’s resources to protect oneself and help people most effectively by withdrawing from larger programs.

The Church has done much for society. If the society does not want her, and she cannot reasonably fund her operations to help society, then they need to be scaled back. After all, if people prefer the government to the Church, and they have open hostility to the Church or will not help her, what reason is there for continual monies to be spent on projects for them?

I am not meaning to sound cruel, or say that people should not be helped. This is far from the intention. Rather, it is a question of what will make the most sense, given what we know, at the time. If the society wants to strip and drive the Church out of mainstream social life and back into the catacombs of the ancient world, then it is back to the past that one must go, but with it all the things that she also brought, for when God withdraws His grace, His blessings do not persist either with Him.

But as for this law, be very mindful of it, especially in the US, where in spite of the many legitimate claims of sexual abuse and the abject failure of Church leadership to do her job in managing said abuse, let alone the support of sodomite behavior and other policies that helped to create the current situation, the fact is that the Church may find herself subject to similar laws in the future. It should be expected, and as such now is the time to prepare before this likely comes to pass and people find themselves surprised.

This article does not represent the opinions of the Shoebats.

The Greek Military Warns Turkey: ‘We Do Not Play Games.’ The Turkish Government Tells The Greeks: “If You Have The Guts, Come.”
Job Numbers Suddenly Plummet After ‘Sharp Increase’
Follow