You are here: Home › University Of Michigan Forced To Apologize For Promoting 1960’s-Style Racism 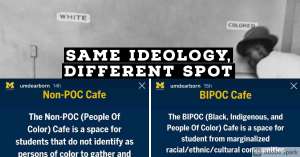 For a long time, one of the hallmark points made by the civil rights movement and other anti-racism advocates- and a correct point, I should add -is the disparity of goods and services that was offered to certain races versus other ones. Most famously, the example of the “whites only” and “coloreds” signs on bathrooms and drinking fountains is given. This is not good because it is an example of racial discrimination.

However, this also means that the reverse is true, for racism is not privy to one group, but anybody can do it, since sin knows no races. As such, it is interesting then that the University of Michigan has been forced to apologized for acting, at an intended aim to assist “people of color”, by creating a space just for them and one just for “non-POC”, or whites, as CBS News reports.

The University of Michigan-Dearborn issued an apology Wednesday for creating segregated online student “cafes,” one for White people and another for people of color, that it says were intended to promote discussions about race and diversity. A statement by the university near Detroit came after two virtual “cafe” events were held Tuesday, with one advertised as a “non-POC Cafe” for non-people of color to “gather and discuss their experience as students on campus and as non-POC in the world.”

The other, dubbed “BIOPIC Cafe” was for Black, Indigenous and People of Color, and described as a space for “marginalized racial/ethnic/cultural communities to gather and to relate with one another to discuss their experience as students on campus” and in the world.

Abed Ayoub, legal and policy director of the American-Arab Anti-Discrimination Committee, said he understood the intention but “it could have been done better, obviously.”

“It seemed that opportunity was missed intentionally,” said Ayoub, a UM-Dearborn graduate. “We know this is a mistake but hope they move forward.”

In its statement, UM-Dearborn apologized for referring to the online gatherings as “cafes,” saying they weren’t intended to be exclusive or exclusionary for individuals of a certain race. (source)

It is true that race is being used as a strategy of tension. I refuse to get into the details o “black vs. white” because that is nonsense and would just play into the tensions. However, what we can say about this or any other opportunity is that it is a good opportunity or people to see that racism knows no single race, and that the sons of Ham, Shem, and Japheth of good will should stand together as brothers who while different people are all part of the human family from who we all descend and denounce attempts to use the created difference as a weapon against each other.

In heaven there are no races, and there are no “white spaces” or “black spaces” or whatever other nonsense term somebody wants to use. There are many rooms in the Father’s house, and there will be people o all races and tongues. He who does not want to accept this reality- and a healthy and a good one -may find himself without a place reserved for him.