You are here: Home › Three Dozen Women Discover Their Child’s “Parent” From A Fertility Clinic Was Not A Genius, But A Dropout And Drunkard With Mental Problems 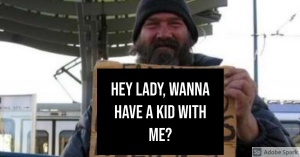 I do not believe I have ever covered the issue in writing, but from reading about trends in the fields of parenting, adoption, IVF, and essentially a modern and new form of trafficking in children, that in the name of ‘helping’ families, it would lead to serious abuses. One of the most obvious and blatant of these has been in “donations” made by men to artificially inseminate women, where women were told they were getting the essence from a genius of sorts, when in the course of legal discovery made by attorneys, it is forced to come out that the “donor” was anything but that. This does not even include the paternity lawsuits, for there already were those coming in saying that in spite of legal documents, a man who “donated” to a woman may be forced to pay paternity fees to the mother who was inseminated.

The trend I saw in this was a legal and social mess done for profit without any care to the effects of what may happen. Now in an interesting story from The Atlantic, this ugly situation has appeared once again, where a clinic is facing lawsuits over a “donor” who in reality was exposed as being a homeless man with mental problems and drug issues.

To the mothers, he was just Donor 9623. They did not know his name, but from his glowing sperm-donor profile, they knew he had an IQ of 160, spoke four languages, was pursuing a doctorate in neuroscience engineering, and looked like Tom Cruise.

But Donor 9623 wasn’t who he said he was. He wasn’t in graduate school. He had never even finished college. The lies began to unravel in 2014, when the sperm bank accidentally revealed his name—Chris Aggeles—and his email address in a message to a group of mothers. By then, the sperm he’d produced over 14 years had been sent to multiple states and three countries, resulting in at least 36 children. Curious, the mothers Googled him and found a comment he’d left online about “hearing voices.” They later found out that he had been hospitalized for mental illness, had been on disability, was suicidal at one point, and pled guilty for burglary—all before or during the time he was donating sperm.

The sperm bank, Xytex, didn’t know any of this, and it hadn’t verified any of the biographical information that was in his profile, according to lawsuits since filed by the mothers. They were shocked to realize how unregulated sperm banks are. And now they worried that their children might have inherited a predisposition to mental illness. Since 2016, they have filed more than a dozen lawsuits against the sperm bank; one case is currently pending before the Georgia Supreme Court. (Xytex did not respond to a request for comment.) (source)

This is not just a business problem in regard to fraud. This is also a philosophical and moral problem, since we are dealing with applied eugenics.

Why else does a prospective buyer want the essence of a genius or other person regarded with a high material or social status? Because it is believed that such things are accrued strictly through blood characteristics, and if one wanted to have a child, that having a child with such a person would increase that child and by extension the parent in question having a better life.

However, human life is more complex that such. Man is not an animal who just breeds for certain characteristics, but who has a soul and a personality. He is greater than his physical body and while there are physical characteristics and attributes passed through blood, there is a spiritual qualities of a man that are a part of his soul which cannot be genetically transmitted because they are gifts from God.

This is the error that such a wholly naturalistic approach to having a family carries, because it reduces a man to a breeding vessel no different than an animal, where it justifies the extermination of the “weak” and “undesirable” in order to “gather” the preferred characteristics, whatever those particular things are.

As there have been many children born by this means of reproductive business, one should expect to see not only more lawsuits, but potentially a regulation of sort coming to the business as it turns out that customers were tricked into purchasing something that they did not want and they cannot return, and with it, perhaps in time, a potential re-examination of the practice itself. However, that will also rest on the acceptability of the public to eugenic ideas, which since it has been a part of American society for centuries, is less likely to wholly disappear but only to change forms into something else.