You are here: Home › C.G. Haendel Gets Bundeswehr Military Contract 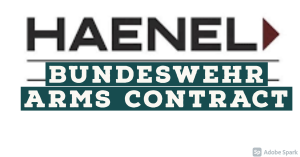 Interesting news comes from Germany after the German Ministry of Defense announces a new contract for arms for the Bundeswehr as reported by T-Online.

The Ministry of Defense wants to purchase the Bundeswehr’s new assault rifle from Thuringian manufacturer CG Haenel (Suhl). According to information from the German Press Agency, the Ministry of Defense informed politicians in the Bundestag on Monday about the result of the selection process. As a result of the bidding process, the long-standing supplier Heckler & Koch (Oberndorf am Neckar) did not get the chance to order 120,000 new weapons worth almost 250 million euros.

Haenel is already supplying the Bundeswehr with a sniper rifle. The company belongs to the Merkel Group, which is part of the Tawazun Holding (United Arab Emirates).

In the bidding process initiated in 2017, the Thuringian company presented a weapon that, in extensive tests, was somewhat better tailored to the requirements of the military and also proved to be economically advantageous, as the dpa learned from military circles.

An affair had developed around the G36 supplied by Heckler & Koch in 2012, which began with indications of problems with accuracy. According to later official investigations, these occurred after long series of fires or under the influence of heat. The weapon is valued by soldiers to this day.

For Heckler & Koch, the Berlin decision is a hard setback at an inopportune time. The company is heavily indebted – its financial obligations of 249 million euros are roughly as high as the annual turnover (2019: 239 million euros). After two years of losses, H&K was ultimately profitable again. Nevertheless, the situation remains tense in view of the still unresolved debt problem.

A power struggle between two major shareholders in the company caused unrest. The long-standing majority shareholder Andreas Heeschen had to hand over a large package of shares to a Frenchman and his Luxembourg financial holding CDE because of a long-ago pledge transaction. CDE has been in charge since July. For H&K, however, it is not the first time that a foreign investor has determined the fortunes. Until 2002, H&K belonged to the British defense company BAE Systems.

910 employees work at the company headquarters in Oberndorf in the Black Forest, and another 85 work in the USA, where H&K has a pistol assembly plant. The US market has recently gained in importance and now accounts for a quarter of consolidated sales. Germany still accounts for a third of company revenues – with a downward trend. In addition to the major customer, the Bundeswehr, the police are supplied with weapons. (source)

Having noted this important point, Ted, Walid, and I have repeatedly said multiple times that Germany is going to militarily rise again. However, these things do not happen out of nothing. It is not as though people just wake up one day with a uniform on their personal body, a rifle in their hand, and swastikas flying in the sky to the tune of the Hörst Wessel Lied playing on an orchestra band that manifested from nothing.

Things have cause and effect. In order for a remilitarization to happen, Germany needs to re-arm, and that means contracting with companies to build war supplies. Therefore, some companies will make a lot of money from government and military spending.

C.G. Haendel will be a company to watch. Also, one may want to watch Rheinmetall, since while they did not get the contract Rheinmetall:

It will be interesting to see if these observations align with future trends.

Study: Cost Of Living Is Rising Much Faster Than Inflation
Japan’s Plan To Have The Capability To Strike China, Explained
Follow