You are here: Home › Study: Cost Of Living Is Rising Much Faster Than Inflation 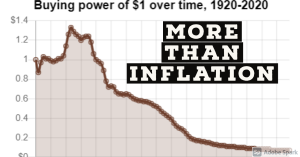 I have written many times about inflation and the relationship between money and policy, as well as the difference between inflation (rise in price because of demand leading to greed), and hyperinflation (the loss of faith in a currency that causes prices to rise because of the worthlessness of the means of exchange). What I have been driving at is that much of the “inflation” in the US is not really inflation, but a tacit admission of a future hyperinflation, because prices are not constantly rising because of “demand”, but because the US dollar’s value is going into the trash bin of history.

But it is not me who says this, since the facts on which I speak are from analysis that anybody can read and study. As such, Zero Hedge recently put out an article about a Harvard Professor who, likely studying the same data, was forced to conclude the same- that prices are rising much faster than the inflation rate, suggesting not increased demand, but a loss in the value of the currency itself.

In an NBER paper titled “Inflation with Covid Consumption Baskets”, professor Albert Cavallo calculates that the true inflation rate for Covid-connected purchases is 1.85%, more than 40% higher than the Consumer Price Index. Cavallo writes that “the Covid-19 Pandemic has led to changes in consumer expenditure patterns that can introduce significant bias in the measurement of inflation.” Using data collected from credit and debit transactions in the US to update the official basket weights and estimate the impact on the Consumer Price Index, Cavallo finds that “the Covid inflation rate is higher than the official CPI in the US, for both headline and core indices. I also find similar results with Covid baskets in 10 out of 16 additional countries.”

If it sounds as if it is politically convenient for most developed countries – not just the US – to mask the true level of their runaway inflation, it’s because it is. After all, how many nations would task their central banks to hike rates and crash their stock markets just because it makes the cost of living of some 90% of the population increasingly unbearable.

Not surprisingly, the Harvard professor also shows that low-income households are experiencing more inflation, compared to high-income households, simply because spending on non-core products which act more as a tax on consumers, and whose prices have been surging, represents a far greater percentage of the monthly paycheck low-income consumers take home each month.

As Cavallo concludes, the difference between the measured and reported inflation “is significant and growing over time, as social-distancing rules and behaviors are making consumers spend relatively more on food and other categories with rising inflation, and relatively less on transportation and other categories experiencing significant deflation.”

One doesn’t need to read Caravllo’s work to know that inflation is already out of control in several “core” products: last week, distortions from the official CPI report could be seen in used-car pricing, which showed the biggest monthly jump in August since 1969, but are still far short of the increases seen by used-car auctioneer, Manheim, an Atlanta-based firm that sells roughly 7 million vehicles a year according to Bloomberg. (source)

Now in fairness to him, he does not speak about hyperinflation, but about COVID and its effects on the economy. That said, a disease simply would not cause prices to rise unless there was a relationship between economic goods consumed and the virus in some way. While it is true that the virus has interrupted distributions systems, the main effect of the virus has been to expose the systematic cracks in the economy that have existed for decades and allow them to run their natural course with the virus as the “excuse” for why there are problems.

These observations are not just the meaningless words of economists. They are a reflection of reality for the consumer, who doesn’t necessarily know what “inflation” is, but know that he and the people around him are not buying more, but having to buy less because prices keep going up while wages aren’t and they are being laid off from their jobs because of money problems in the place where they work.

This is real economics, because what we have lived through is a sort of pseudoeconomics where numbers are invented based on false premises to artificially prop up stock prices and drive what is not business, bu value-swindling schemes for reasons of domestic control and foreign geopolitical influence. It is not even right to call it a real economy, since it is based on nothing, as the goods and services that are produces, what few there are, increasingly are just covers for the same actions.

When Is There Going To Be The First Chinese Chernobyl?
C.G. Haendel Gets Bundeswehr Military Contract
Follow