You are here: Home › TikTok Likely Safe After Deal With Oracle 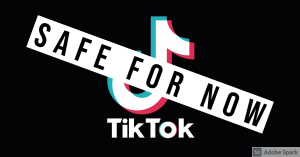 CNBC reports that a deal has been reached between Tiktok and Oracle that will allow the popular app with Zoomers to continue to stay on phones.

Approval of Oracle’s deal to become a “trusted technology provider” for ByteDance’s TikTok will be announced on Tuesday afternoon, CNBC’s Jim Cramer reported. A source familiar with the matter later confirmed to CNBC’s Eamon Javers that a decision could come Tuesday.

Oracle confirmed Monday it had struck a deal with the popular video-sharing app’s Chinese parent company. Oracle had been a dark horse in the competition over TikTok, with Microsoft emerging as the first known bidder with Walmart later joining its offer. But ByteDance rejected Microsoft’s bid to buy TikTok’s U.S. assets, Microsoft confirmed Sunday.

Oracle’s plans to become a “trusted technology provider” for TikTok falls short of President Donald Trump’s demand for a full acquisition of the company’s U.S. business. That could make the deal trickier to gain support from U.S. officials who still must approve it, though could assuage some concerns from Chinese officials about a forced sale. Oracle’s leadership has maintained a close relationship with the Trump administration, however, with CEO Safra Catz previously taking part in Trump’s transition team and Chairman Larry Ellison hosting a fundraiser for Trump’s reelection campaign earlier this year.

The president threatened to ban TikTok from the U.S. if it did not reach a deal to sell its U.S. business in a way that resolved national security concerns with the app. Government leaders across the political spectrum have expressed concern that Chinese officials could access data from U.S. users through the app’s Chinese parent company, though TikTok has repeatedly denied this accusation and no evidence that such data has been accessed has been made public.

An executive order that would effectively ban the TikTok app is set to go into effect on Sunday, though approval of the deal could resolve concerns before then. (source)

There was never a question in my mind that this would not be the most likely outcome.

Every election cycle, or whenever it is politically convenient, certain issues are brought up as a new “villain” that needs to be destroyed. Now it should be said that not all the issues are in themselves things which deserve to be overlooked. Many of them are real social problems. What I am speaking of is the over-politicization of an issue that leads to unnatural swings.

For example, during the 1950s, there was an obsession with Communism. This is not to say that Communism is not a threat, or that it should not be dealt with, because it certainly was then and still is now. However, the problem is the American ethos that as Harper’s Magazine put it in 1964, is part of a “paranoid style” of thinking that prevents issues from being solved in a balanced, long-term way but rather creates one extreme to swing to another. In the case of communism, it was anti-communism in the 1950s to swing full communism in the 1960s with no sense of cognitive dissonance between the two positions.

In the 1960s and 1970s, it was an abundance of drugs and the promoting of drugs that was a hallmark of American life, especially among youth culture. Then once the 1980s and 1990s came along, the trend completely reversed, and drugs not only became something that just evil people do (this being said from the same people who in the 1960s and 1970s were constantly high) and so laws need to be passed making those convicted of drug crimes imprisoned for long sentences and made permanently unemployable for practical matters. Again, I am not defending drugs, but saying that the drug issue is an example of this “paranoid style” where one extreme is swung to another for political gain. During one time frame, it was all good, and a few years later, it is all bad, with no philosophical reasoning for why this is the case other than ultimately, because that is agreed upon.

Now following this logic, we have China as a “minor” issue here, where China is being blamed for a lot of problems, and justly so. However, the solution being given is “banning TikTok” because “Chinese spying”. Likewise, the “paranoid style” is being whipped up again, most interestingly at election time. The real question is, will this continue after elections? That is to be seen, but just like in 2014, where is all of the fear about ISIS attacking the USA today? It was the main story of those years and now they have returned to nothing, and people are afraid instead of “BLM” and “China”.

Fictional, exaggerated, or selectively-chosen bogeymen and then instigating a lynch mob against the same bogeyman, which often will reverse in the course of a generation, for the sole purpose of directing the sentiments of the political masses towards the end of consolidating government control further than what it already is a part of this pattern. Indeed, this is not new, for even as far back at the 1886 case of Nix v. Hedden, which is the famous case that said a tomato (scientifically classified as a fruit) is a vegetable not because of science, but because courts decreed it a vegetable, proves that the mindset has existed since then and is still a problem.

Today it is TikTok, and tomorrow it is something else, and by tomorrow, TikTok and all of the discussions about it will have been mostly forgotten, and the only thing that will have changed is that the window of acceptable social behavior will continue to shift further and like a frog boiling in the pot, none will notice that they have already been cooked.

Japan Elects Loyalist Yoshihide Suga After Abe Departure
Oregon Police Chief On The Horrendous Fires: “We have good reason to believe that there was a human element to it”
Follow