You are here: Home › Arizona Is Turning Blue 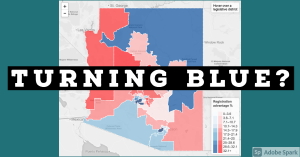 Arizona for years has been viewed by Republicans as a historical bastion, but that is changing due to migration, not so much from her southern border, but from her western border with California, as people rush from the burning ship they set afire to a new vessel they are currently putting tinder to as The Hill reports.

The Cook Political Report shifted the presidential race in Arizona toward Democratic presidential nominee Joe Biden on Thursday after a new poll showed the former vice president opening up a 5-point lead over President Trump in the state.

The election handicapper’s decision to move Arizona from its toss-up column to “lean Democrat” came amid mounting signs that the state is slipping away from Trump despite his narrow 3.5-point win there four years ago.

A poll from the Kaiser Family Foundation (KFF) and Cook Political Report out Thursday showed Biden leading Trump 45-40 percent, giving the Democratic nominee a more substantial advantage than in other battleground states like Florida and North Carolina.

The poll results track with other recent public surveys. The FiveThirtyEight polling average in Arizona shows Biden with a 4.8-point edge over Trump.

The KFF-Cook poll carries some troubling signs for Trump’s reelection bid. Republican voters in the state aren’t as firm in their support of Trump as they are in Florida and North Carolina, with only about 73 percent saying they will definitely vote for the president in November. Another 9 percent said they will either probably or definitely cast their ballot for Biden.

Trump’s support among Latinos in Arizona is also lagging. The poll showed him garnering just 17 percent support among those voters to Biden’s 55 percent. In 2016, Trump captured 31 percent of the Latino vote in Arizona. (source)

To that, it is worth noting that Trump’s betrayal of his basic promises does not help him. A lot of people voted for him on the assumption that he would fulfill certain ideas, which he has not and in some cases for all purposes has arguably reversed his position.

Trump still has the favor to win, and there is a month left, and being that said month is October, there are still many things that could happen, for the idea of the “October Surprise is not uncommon. That said, the long-term advantage in Arizona and many other states is going to be with the Democrats, since due to internal migration and the general liberal attitudes of the Millennial and Zoomer generations, they are inclined to further Democrat control over the nation.

If Trump wins in 2020, enjoy the victory, since it nearly guarantees a Democrat 2024 victory.

Bank Of England May Impose Negative Interest Rates For The First Time In Four Centuries
Protestors Tell Officers Who Just Got Shot: “We Hope You Die!”
Follow