You are here: Home › Bank Of England May Impose Negative Interest Rates For The First Time In Four Centuries 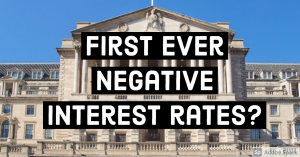 In the year 1694, America was a collection of British colonies located mostly on the Atlantic coast. The middle regions were largely a French claim but mostly wild and filled with native tribes, and Florida to the southern coast as far west as Texas and beyond was controlled by the Spanish, but still also very open and a wilderness. Poland was still waging war against the Ottoman Empire as the Polish-Lithuanian Commonwealth, only to be divided up ninety years later (which, by the way, is still more time than from the start of World War II until now) by Austria, Germany, and Russia. Most of Russia had not even been conquered and was still the wilderness of various Turkic tribes, and the Qing Dynasty just finished consolidating power after decades of war. I say all of this to give context to the nature of this institution that is the Bank of England, and the long history it has, especially in light of America’s existence, place in the world, and rise to power.

The Bank of England indicated Thursday that it could cut interest rates below zero for the first time in its 326-year history as it tries to shore up a U.K. economic recovery that is facing the dual headwinds of the coronavirus and Brexit.

After unanimously deciding to maintain the bank’s main interest rate at the record low of 0.1%, the nine-member rate-setting Monetary Policy Committee said it had discussed its “policy toolkit, and the effectiveness of negative policy rates in particular.”

In minutes accompanying the decision, the rate-setters said a recent wave of virus infections has “the potential to weigh further on economic activity, albeit probably on a lesser scale than seen earlier in the year.”

Though the committee noted that recent economic data have been a “little stronger than expected” at its last meeting in early August, it said it is unclear what that says about the future “given the risks.”

One clear concern relates to whether Britain, like others in Europe, will reimpose broad restrictions on businesses and public life after the recent flare-up in virus infections across the region. Already social gatherings are being restricted and certain areas of the U.K. are seeing localized lockdowns.

The British economy suffered one of the deepest recessions in the world this year when many sectors were effectively mothballed to help contain the pandemic. Though it recouped some ground in the summer as lockdown restrictions were eased, the economy was still around 12% smaller at the end of July than it was in February, when the pandemic started in Europe.

The other major risk facing the U.K. economy relates to the post-Brexit trade discussions between the U.K. and the EU following a worsening in relations. If the talks collapse, tariffs and other impediments to trade will be imposed by both sides at the start of 2021, a development that would hurt the U.K. more.

The U.K. left the EU on Jan. 31, but is in a transition period that effectively sees it benefit from the bloc’s tariff-free trade until the end of the year while the future relationship is negotiated.

With the outlook so murky, the bank was not expected to provide more stimulus on Thursday. Since the pandemic started, it has cut its main rate to a record low and boosted its bond-buying program to oil the financial market’s wheels and keep borrowing affordable.

The policymaking panel said Thursday it could take further action on borrowing costs after revealing it had been briefed on how to effectively implement negative interest rates, which would seek to encourage banks to lend rather than hoard their cash. The central bank will further discussions the potential use of negative rates during the fourth quarter.

Though that doesn’t necessarily mean a rate cut is likely this fall, it’s a clear signal that the bank could enact further stimulus measures.

“While the Bank is clearly exploring the possibility of using negative rates as a potential tool, we doubt it will go down that path anytime soon — at any rate, not in November,” said Kallum Pickering, senior economist at Berenberg Bank. (source)

The main purpose of negative interest rates is, logically speaking, not to encourage savings but rather to try to get people to borrow money, because there is no purpose in saving if one is going to have to pay money on what one is saving. This is also happening in the US with zero-percent interest rates, since while it does not help banks, it encourages the public to seek loans.

However, the problem with the global banking system is the same as it is with the USA, as she is using the same tools, but because it is and issue of debt. The banks of the world are in a historically abnormal and unprecedented amount of debt, and this is a reflection of the borrowing among the people. They are not taking loans because they cannot because they have no extra income to use. The entire system is ‘tapped out’ and while there can be more schemes created to encourage borrowing, there is only so far this can work. Unless there is a debt jubilee, it is going to force a crash to the global financial system and since debts cannot be paid, a physical fight that will ensue and be used to justify relinquishing debts that will likely take the form of a global war.

This is just one phase, remembering that economics precedes politics, and thus what happens in business has political consequences.

While the world has been through situations such as this before, the intensity and worldwide spread of the debt has never happened, and being in historically unmarked waters, one can surmise to expect the unexpected, for as human nature remains the same throughout time and does not fundamentally change except in form and intensity, one can only wonder at what events the future will bring about.