You are here: Home › Forget About October Surprise, It Has Already Begun With A September Surprise Following Justice Ginsburg’s Death 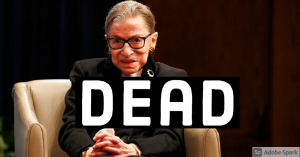 It is making news around the country as Supreme Court Justice Ruth Bader Ginsburg is dead.

Justice Ruth Bader Ginsburg, the demure firebrand who in her 80s became a legal, cultural and feminist icon, died Friday. The Supreme Court announced her death, saying the cause was complications from metastatic cancer of the pancreas.

The court, in a statement, said Ginsburg died at her home in Washington, D.C., surrounded by family. She was 87.

“Our nation has lost a justice of historic stature,” Chief Justice John Roberts said. “We at the Supreme Court have lost a cherished colleague. Today we mourn but with confidence that future generations will remember Ruth Bader Ginsburg as we knew her, a tireless and resolute champion of justice.”

Architect of the legal fight for women’s rights in the 1970s, Ginsburg subsequently served 27 years on the nation’s highest court, becoming its most prominent member. Her death will inevitably set in motion what promises to be a nasty and tumultuous political battle over who will succeed her, and it thrusts the Supreme Court vacancy into the spotlight of the presidential campaign. (source)

Now I do not want to speak ill of the dead. I strongly do not like her politics and have equally strong ideas on many other things related to her, and while there are many things that one can say about her life, I say for the matter “Requiescat in pace” (Rest in peace) and encourage others to pray for her soul, and that will be all.

Returning to the core matter, her death opens up a hole in the Supreme Court which given the contentious, cantankerous, and partisan nature at such an election year, makes it all the more interesting.

Some people may argue if her death now was intentional or not. Personally, I have yet to see any solid evidence indicating foul play, although given how this year has proceeded, and the political nature of opening up a Supreme Court spot, it should not be ruled out as a possibility (although one yet to have any evidence provided to it in order that such a claim may be substantiated).

But I’m going to give an opinion on this, and it may not be popular:

I don’t care about any of it.

I see no reason to care that this point.

“But this is the most important election in history”
You mean, like 2016?

“This is a war between Marxism and Christianity.”
The US government has been socialist since 1935 with the creation of the Social Security program and the establishment of the National Labor Relations Board. Technically, she has been in full support of National Socialism since 1945 (Operation Paperclip and Gladio) and has been ever since, and her opposition the USSR and “Marxism” is just the opposition of international socialism.

“Black Lives Matter is burning cities down.”
Until November 4th, 2020, and if it continues after, it will be for political expediency until it is determined that it is no longer necessary. Just ask ISIS.

“If we don’t get the right justice in, Liberals are going to destroy America.”
You mean like Justice Roberts, who was said to be Conservative but just so happens to vote liberal consistently on many major issues? Forget about Neil Gorsuch, for he openly supports all things of the LGBT and sodom. At least if it was a liberal one would know what one is getting, instead of expecting gold and getting only lead.

“Christianity is under attack we have to do something”.
The time for that was decades ago. Previous generation and the current one made their choices and now we will be forced to bear the consequences for good or ill. It may be the “first time” for America in the sense of a serious social disenfranchisement (except for the Catholics, who have even now never been fully accepted), but Christianity and America are not dependent on each other. Christianity will suffer, and be forced either into orthodox beliefs rooted in true faith and sound theology as well as philosophy or it will merely revert to the national religion that for many is what the practice of the faith represents.

“We need a political solution”.
Now is not the time for this because the “shark has been jumped” for all thing political. The best thing that Christians can do is to do a tactical retreat, focus on consolidation and cleaning up internal problems, and to prepare for persecution because that is what the future holds. So many Evangelical types love to opine about the “early Church” as opposed to Catholics and even mainline Protestants or Eastern and Oriental Orthodox who they call “unbiblical”, and one might say that they are about to get their wish because a lot of Christian practice is going to be forced into secrecy. It has already started with the arguable corporate enforcement of sodomitic practices at work in at least verbal agreement with them lest one find oneself in a visit with the “HR lady”, and there is going to be a lot more things to come.

The problems are going to be very serious. But that does not change Christian teaching or truth. Instead, it means that, like with societies throughout history, people are rebelling, and it is for those who are wise to prepare.

2020 will likely go to Trump for political reasons. There is a chance it may not, but for now, sit back and enjoy the free entertainment while making better decisions in preparing today for the future that will come and be serious.

Ginsburg is dead, a hole is created, and the people are in a frenzy. Be smarter and don’t follow the masses, for there are a lot bigger events coming than the 2020 elections, and now is the time to get ready.