You are here: Home › Afro-American NFL Player And Christian Tells US Racial Justice Warriors To Stand Up For Persecuted Christians In Nigeria 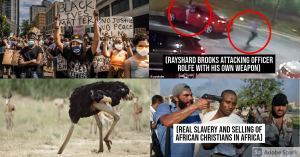 With all of the talk about ‘racial inequality’ in the US that while it does exist and happen, often is much better than in the rest of the world. Africa is one such area where African Christians are routinely murdered, raped, and even sold as slaves by Muslims or government-backed militia for political power. Sadly, there are few who discuss this, and rarely ever from those calling for ‘racial justice’ in the Us.

But an NFL player, who is also Christian and an Afro-American, has recently called them out, as the Christian Post reports, saying that in recent statements, he told ‘racial justice advocates’ that they if they cared about the good will of African people, they would talk about the genocide of Christians taking place in Nigeria.

Former NFL tight end and outspoken Christian, Benjamin Watson, is calling on Americans fighting for racial justice in the U.S. to also call for an end to violence against Christians in Nigeria, as activists warn the world might be ignoring a possible genocide.

Watson, 39, who announced his retirement earlier this year after 16 seasons in the NFL, participated in a press conference Wednesday in Washington, D.C., where he sat next to former Democratic presidential candidate and Congresswoman Tulsi Gabbard, D-Hawaii, to speak out against the violence perpetrated by Fulani radicals and extremist groups like Boko Haram.

Hosted by the International Committee on Nigeria, the event was designed to raise awareness of the violence experienced by Christian communities in Nigeria as estimates suggest that millions of people have been displaced and thousands have been killed in recent years due to extremist violence taking place in the northeast and violence carried out by herding radicals against predominantly Christian farming communities in Nigeria’s Middle Belt region.

“I am here for many of the same reasons that everyone else is,” Watson explained. “I can remember several years ago it being impressed upon me that the Body of Christ here in the United States is dealing with our own issues. But compared to what is going on around the world in many respects, we need people that stand up for those who are being persecuted. At some time, it may be us.”

The event, which also featured remarks from other human rights advocates, comes after thousands across the U.S. took to the streets nationwide this summer to demonstrate against police brutality after the death of African American George Floyd who died in Minneapolis police custody and other African Americans this year. More than 20 people have been killed during Black Lives Matter protests, some of which have turned into violent riots and arson attacks that have caused $2 billion in damage to local businesses in cities across the U.S.

“We are in a time of racial reckoning in our county,” Watson stressed. “The term racial justice is thrown around a lot. But if we are sincerely concerned about justice, we must understand that justice must be advocated for at home, yes, but also abroad.”

Watson, who has been vocal about racial issues in the U.S. and even authored the 2015 book Under Our Skin, challenged those “who care about racial and social justice” issues and are “fighting for the equality of black citizens” in the U.S. to “remember and advocate for justice in the homeland.”

“This time of reckoning, as important as it is for all of us here in the United States, shouldn’t be limited to our shores as injustice persists,” Watson urged. “Every little bit helps.”

The football player, who has spoken out about many injustices over the years, including abortion and sex trafficking, explained that he was first made aware of what was happening in northeast Nigeria with Boko Haram’s insurgency when militants abducted 276 female Christian students from a school in Chibok, Borno state, in 2014. (source)