You are here: Home › What If A Christian Made A Similar Comment?

Comedy since the ancient world has been used as a tool of political or social criticism, as this is its inherent nature. One of the famed members of the British Comedy troupe Monty Python (I believe it was Eric Idle or John Cleese, but I cannot remember exactly as I have not been able to locate the interview for some time) said that most comedy is rooted in anger, and that the reason the troupe stopped being so prolific with their comedy is because as they matured and had families and settled down into normal life, they became less angry and thus had less material to draw upon.

It is also one of the reasons why many dictatorships or authoritarian states restrict or ban comedy, and the reason is not because they ‘hate freedom’ or are ‘just evil’, but because they recognize that comedy is a tool of subversion and if not controlled can and will be used to invert the current order and set up whatever the “comic”, if one can even call many of these people that, desires in their place. This is not to say that comedians are inherently revolutionaries, but that the ideas which he propagates may gain popularity and replace the current system. If not causing a revolution, then comedy, especially in the Western world, can be used as a legal shield to insult, degrade, and attack another group under the cover of “art” or “jokes.”

A perfect example of such comedic references can be seen in the treatment of Christians, Christianity, and the Church by comedians, and in particular the self-identified Jewish ones, by their treatment of Jesus. Jokes against all the three and even Christ Himself that are openly blasphemous and insulting are made, but dare somebody talk about Jews and the Second World War or just anything in general and there will almost inevitably be a crowd of fellow co-religionists, co-tribalists, and other various gathered together charging “anti-semitism”.

It should be noted that even Monty Python, who made the famous movie Life of Brian that was accused by many Christians of blasphemy, and of which the members of the troupe are not Christians but agnostics, consistently has said that they refused to mock Jesus because they said that studying His life, not only is there nothing in his life that is able to be mocked, but no matter what one thinks of Jesus, nothing bad can be said about Him. This was the reason why in the Life of Brian there was only one scene with Jesus, and the man they contracted to play the part of Jesus was a famed English actor, and they had Jesus preaching on the mountain saying the Beatitudes, and the only comedy in the scene is focused on members in the audience who while listening to Jesus clearly persist in completely ignoring what He is saying or taking it seriously to heart.

As far as comedy is concerned, this is not to say that the reverse does not exist. The point here is the duality of the treatment, where openly crude behavior is supported against one group, specifically Christians, and is considered OK, but when an equal type of ‘humor’ is used against members of the same group making the treatment when such persons are self-identified Jews, it is so often not considered OK and even something so bad that it potentially can destroy one’s career.

The above observation should be noted in context with a recent tweet from Ben Shapiro, where he made references about Christ and the Passion that many people, with good reason, perceive to be derogatory. 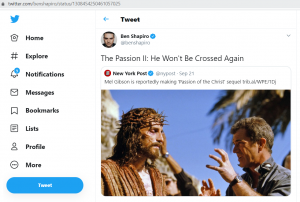 What did he mean by this? I have yet to see Shapiro try to explain them, and judging by the Twitter feed, a lot of people are upset, but he has not apologized and the tweet is still up.

Now I want to take these comments and reverse them for the sake of argument.

Just imagine, for a minute, something of a similar nature. Let’s take the mention of Auschwitz, since that is a sensitive topic for many Jews.

What would it be if a major Catholic media personality- it doesn’t matter if he is a Democrat or Republican -made a comment saying something like “Auschwitz Two- The Ride Never Ends?” (inspired by the common online meme “The Ride Never Ends”).

What would the point of making such a statement be, knowing how many people would react? What would Jewish groups have to say about it? Would there be crowds of people defending this as a “joke”, or would there be the same cries of “anti-Semitism”, “Jew hate”, and “Nazis”? Would the person who made the comment be able to just say “this is a joke” and get away with it? Could it be possible this may become a segment on the nightly news, and this person may lose sponsorships or even his entire show?

It is rather clear that practically no productive gains could come from making such a statement, so why make it? As such, what is the purpose in Shapiro making the statement that he did, considering that it is likely many people in his audience are Christians?

Something that Shoebat.com has tried to address is racism of all forms. Anti-Semitism is not good, and when I say “anti-Semitism”, I speak not merely of Jews, but also of Arabs, Assyrians, Chaldeans, Copts, Ethiopians, and Syrians, since they are also Semitic peoples of equal dignity. However, truly opposing racism means opposing anti-Japhetism as well as anti-Hamitism, since Ham, Shem, and Japheth are all brothers.

Ben Shapiro is no fool, and given how he has presented himself as a “big brain”, he has no excuse for making comments that for all purposes he can attempt to explain away, but no matter what his volume of words may be, inherently leave open the doors of anger by their stench of loxist discrimination, something that is a known historical problem and eventually compels Japheth to leave the tent of Shem with the force of violence.

In a time when racism is rising and people are using ‘blood and soil’ to divide groups against each other, there is really no good reason for encouraging, aggravating, worsening, or even giving question to worsen the social conditions more than what they already are. All men are made in the image and likeness of God, and as many forces are threatening to pull apart the human family once again and plunge it into a state of war, the last thing that one needs is a person, no matter if he says something is a “joke” or “art” or something else, for all purposes trolling people into potentially more antagonistic scenarios than what already exists.

Likewise, to Christians who give Shapiro attention or money, one may want to consider this a possible insight into what he thinks about you and your religion, and if he doesn’t apologize, to take your attention and money to a more worthwhile and respectful recipient.