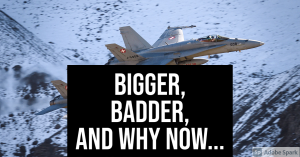 Switzerland, the landlocked country in Western Europe that sits between Italy to the south, Germany to the north, France to the West, and Austria and Liechtenstein to the east, is the famous ‘neutral nation’ in Europe as well as the place where politicians, criminals, movie stars, drug lords, governments, and people of all kinds of unique backgrounds, from just the very wealthy and rich to the very special cases of society, store their money amid her tight banking secrecy laws. Now the tiny nation, which has not seen a war in approximately two centuries, according to Popular Mechanics is making a curious move, as it regards a proposal to purchase a fleet of fighter jets.

The people of Switzerland will vote later this month on the future of their country’s fleet of fighter jets. The Swiss Air Force would like to replace its aging F/A-18 Hornet fighters, but opponents cite the fact that Switzerland has enjoyed two centuries of peace and is surrounded by friendly countries, making new jets an unnecessary purchase. The country will vote on the issue on September 27.

The Swiss Air Force operates a total of 34 single-seat F/A-18C and two-seat F/A-18D Hornet fighters. The jets, acquired in the 1990s, will age out by 2030. The Air Force wants to buy new fighters, with candidates including the Airbus Eurofighter, French Rafale, F/A-18 Super Hornet, and F-35A Joint Strike Fighter.

Switzerland plans to spend $6.6 billion on new airplanes, acquiring the first in 2025 and enough to retire all of the Hornets by 2030. (source)

Now it is in fairness to Switzerland to say that the nation may be updating her already existing fleet, because updates to happen. This is a normal thing and should be expected.

But why? Why is she doing this right now, and what reasons are there to justify such an upgrade? This is not to say that one should expect sudden attacks from brigades of Swiss ruffians ,but that militarization is always connected to war and war preparation. It is one thing if the US or Russia does this, and even China and India are not a surprise because they are aspiring world powers. Likewise, the French also have a very large military they maintain, and the UK have been imperialists for centuries, so militaristic activity from them is to be expected.

But Switzerland? A small, mostly Germanic nation with a history of neutrality making military purchases as a time when Europe is seeing a revival of German nationalism amid major social and cultural changes that many people, in particular the Germanic peoples, feel threatened about, and to that in the middle of a major world economic crisis, and that she is also a major center of banking? It is wrong to jump to conclusions in the light of a lack of clear proof, and I do not wish to say that. However, the behavior does seem quite interesting when one considers the circumstances, and it would be foolish not to wonder what logical thought processes are taking place that explain why said things are being done.

Not everyone thinks the new jets are necessary. Reuters quotes a member of Switzerland’s parliament:

“Who is our enemy? Who is attacking a small, neutral country—surrounded by NATO? It’s really absurd.”

Switzerland is neighbors with friendly countries, including Germany, France, Italy, and Austria, all of which have fleets of fighter jets on their own. The country’s closest conceivable adversary, Russia, is roughly 1,000 miles away.

The proximity of friendly countries is exactly something to worry about, not because of friends possibly turning against friends, but friends working together for a common purpose.

It is known that there was a lot of Swiss involvement in helping funnel money to and hide gains from the National Socialists before, during, and after World War II. This is an ongoing scandal of which the full scale does not seem to have been fully revealed, and one may never know the full extent. What we can say is that there was a lot of collaboration between the Swiss banking sector and said Germanic nationalists, and that given how Germany is again looking to her past as a source of inspiration, a Swiss interest in militarization may be a sign of interest in helping or perhaps preparing to help her Germanic neighbor, for while it is true that Switzerland is mountainous nation with lots of hiding places that would make it difficult to conquer, the main reason why Switzerland was the only neighbor Nazi Germany left unconquered along with Sweden was likely for the same reason with the latter- that she was helping the National Socialists, but through her accounting and financial activities.

This isn’t the first time Switzerland has voted on the fate of fighter planes. In 2014, voters rejected an effort to replace the Hornets with Swiss-made Gripen multi-role fighters. And Switzerland wouldn’t be the first wealthy western country to walk away from armed jets, either: In 2001, New Zealand scrapped its fleet of A-4 Skyhawk attack jets.

Fighter jets are expensive, and even rich Switzerland doesn’t keep planes on alert 24/7. In 2014, critics ridiculed the Swiss Air Force after fighters from neighboring France and Italy escorted a hijacked Ethiopian Airlines plane to safety at Geneva international airport. The Swiss Air Force, it turned out, only worked normal business hours on weekdays and was closed on weekends. Reuters reports Switzerland has an agreement with nearby air forces to allow them to enter Swiss airspace during emergencies.

Forgoing fighter jets would save Switzerland a lot of money; the F-35A costs approximately $80 million up front and another $45,000 an hour to fly over the lifetime of the aircraft. Still, not having fighters for emergencies will erode the country’s national sovereignty, and it’s hard to see how a country that relies on neighbors to police its airspace can be truly neutral.

These are all notable observations, and they inevitably encourage the average man who thinks about the consequences of these things to ask why such a tiny nation would take such measures. However, if one looks at pan-Europeanism as a larger ideal, then things seem to take a much better shape.