You are here: Home › California Prisons Move To House Prisoners By ‘Gender Identity’ 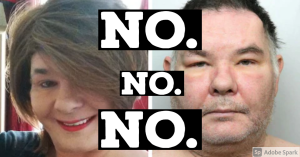 One of the characteristics about modern life is that it has become defined by clownish behavior that lacks reason and order. The ever increasing number of special interests and a never ending quest to appease them save for the ‘normal’ that is no more have resulted in the legalization of personal pathologies and the legitimization of what a few decades ago would be rightly called insane.

According to the AP, the state of California again is leading the nation in the process by choosing to house prison inmates by their ‘gender identity’ following a new law.

Gov. Gavin Newsom signed a law on Saturday requiring California to house transgender inmates in prisons based on their gender identity — but only if the state does not have “management or security concerns.”

The California Department of Corrections and Rehabilitation houses men and women in separate facilities. Transgender inmates are often housed based on their sex assigned at birth. Advocates say this is dangerous, particularly for transgender women housed in facilities for men.

The law Newsom signed Saturday says officers must ask inmates privately during the intake process if they identify as transgender, nonbinary or intersex. Those inmates can then request to be placed in a facility that houses either men or women. (source)

There is a tremendous amount to take in right here.

This whole idea of calling gender ‘sex assigned at birth’, as this very article uses, is also a part of this mental illness pretending to be intelligent political discourse.

There is no such thing as ‘sex assigned at birth’ because gender is connected to biological makeup. One cannot chop one’s genitals off, put on different clothes, and for all practical purposes, ‘glue’ a new pair of genitals on to become a member of the opposite sex because the basis of gender is not just on parts. It is a cellular thing at a genetic level. Thus a person is not just ‘male’, but every cell in that person’s body has a male identifier on it, just as ever cell in a woman is for that of a female. There is no way to ever separate gender from genetics. In fact, this idea is one of the most unscientific things that could ever be proposed and likewise is one of the easiest statements to prove.

The transgender situation is a political, philosophical, and religious issue, but it is not related at all to science.

As noted, the reason why inmates of the various genders are separated is because prison attracts a lot of people who choose to participate in animalish behavior, and because of this, there is a fear that the men will attack and rape the women.

A ‘transgender woman’ is nothing more than a man with mental and spiritual problems pretending to be a woman. Putting him with a ‘Trans man’ does not stop possible rape, but increases the likelihood of it, because while politics can be manipulated, biology cannot and will not tolerate this, and it will overtake all politics just as a much as a man who thinks that he can deny the laws of gravity finds out the hard way that his beliefs do not stop him from being bound to the same law.

The law says the California Department of Corrections and Rehabilitation cannot deny those requests solely because of inmates’ anatomy, sexual orientation or “a factor present” among other inmates at the facility.

Sen. Scott Wiener, a Democrat from San Francisco who authored the bill, said he doesn’t expect that exception to be used very often.

“It’s just a false narrative about transgender people and about transgender women in particular that they’re somehow not really women and are just trying to scam their way into women’s bathrooms or facilities in order to do bad things,” Wiener said. “Overwhelmingly the people who are being victimized are trans people.”

The false narrative- the real false narrative -is the idea that sodomite behavior is normal. ‘Trans’ people don’t exist. There are men who like and choose to LARP as women and women who LARP the same as men, but LARPing does not make for real truth, for if that were the case, then every man would have already LARPed as a billionaire by now.

American prisons are violent enough, and many people are routinely beaten or killed in them. This legal ‘loophole’ gives license to create the scenarios for chaos, where prison staff cannot adequately protect other prisoners from harm lest they find themselves in a legally dangerous area, but it also make them put into situations where they might be in that same place. There is no ‘winning’ here because the intention sowing of confusion by men such as Mr. Wiener have made it so that one cannot do one’s job without endangering oneself or another.

Likewise, his line about how such is just a ‘lie’ is also incorrect, because rape of real women by the so-called ‘transgender women’ is common for the reason that biology always wins.

At any time, if inmates raises concerns about their health or safety, the law says the state must reassess where they are housed.

“It means a lot to me and my sisters,” said Michelle Calvin, a transgender woman incarcerated at Mule Creek State Prison who recently called in to a news conference about the bill. “I’ve been in for 15 years. I’ve been through the abuse, I’ve been through the disrespect of staff not addressing me for who I am because I am a woman.”

The real issue of health and safety is to real female prisoners, not men pretending to be women.

The law was one of several LGBT-related laws Newsom signed on Saturday. He signed another law authored by Wiener requiring local public health officers to better track how diseases are affecting the LGBT community. He signed a law authored by state Sen. Lena Gonzalez to ban life and disability insurance companies from denying coverage solely because someone is HIV positive.

Diseases affecting the LGBT is a joke because as Shoebat.com has reported, there is so much disease that defines the group it is almost comedy to think otherwise, and the reason is that unnatural practices create unnatural consequences. This is beyond the obvious HIV and other STDs, some of which are becoming drug-resistant and based on the data in a seeming way due to the overwhelming contraction of them by this bloc, but that the LGBT are incubating new diseases such as fecal-based illnesses because, as Shoebat.com reported in 2018, it became popular to literally eat human feces from random people.

There are the notorious parties where drugs and drug sharing about, using crystal meth to stay awake for days. Sometimes, they will even shove crystal meth into their rectums in an abhorrent practice called ‘slamming’ that is done to try to give the person a drug high and make their intestines tighter for other men to sodomize repeatedly.

The practices are almost unending, and I do not wish to spend more time on them, for they have been well documented in the Shoebat archives. The point in raising these and other issues is that the legal enshrining of the LGBT is not just about “helping people” (not that it would have helped anybody, because this is just giving license to evil), but necessarily involves a fundamental transformation of all society in order to fit the values of gomorrah.

Do you find the above practices repulsive? Are you concerned about the looming push for giving legal permission for pedophiles to abuse children? Are you disturbed by the moral collapse of the nation? Are you concerned about putting men pretending to be women near real women who are in prison? If you said ‘yes’ to any of these questions, you cannot support anything LGBT because all of this leads to the same end, which is chaos and death.

Every Time There Is A Riot, It Helps Donald Trump
Florida Man Wearing No Shirt Breaks Into Catholic Church, Sets Three Pews On Fire
Follow