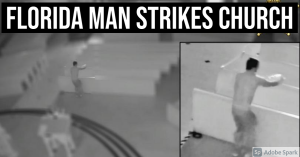 “Florida man” is something of an American meme, because Florida attracts a lot of people with problems for many reasons, and given that there are so many of such individuals, it is common that crimes otherwise considered ‘uncommon’ are regularly reported by Florida police in everything from municipal to state issues. One only needs to put “Florida man” as a phrase into a news search queue and practically, without exaggeration, every day there is some interesting crime committed by a “Florida man”.

But this recent round of crime committed by a man in Florida, or perhaps, “Florida man”, is not funny or good, as according to LifeSite News, the above mentioned person, wearing no shirt, broke into a Catholic Church, set three pews on fire, and proceeded to flee.

A shirtless man wearing a mask broke into a Catholic Church and set three pews on fire.

According to the Tampa Bay Times, police are looking for the man, who broke into Incarnation Catholic Church in Town ’n’ Country, Hillsborough Country, Florida last Friday night.

Security footage shows the as yet unidentified arsonist smashing through a church door to disable the lock and then taking a bottle inside. The bearded white man, who was wearing only gloves, a mask, trousers, and running shoes, then sprinkled three pews with liquid from the bottle and set them ablaze.

According to the Hillsborough County Sheriff’s Office, the break-in and arson occurred at 10:36 P.M. The arsonist didn’t steal anything, and he remained in the church for no more than three minutes.

Fr. Mike Cornier addressed the event before Mass in remarks recorded for the internet.

“An individual broke into the church with the full intention of burning our church to the ground,” he said. (source)

With all fairness to the “Florida man” idea, this is more than just about him, because what we see here is a pattern of behavior that has been in the process of building for a long time and is going to be a trend for the future, which is a return to anti-clericalism but in a more virulent form.

It can be argued that American “Christianity” is a very questionable thing even in the past, as being a “Christian” was and continues for many (even among too many Catholics) to be a sign of national pride or patriotism. While it is good to seek the good will for whatever nation that one calls home, religious faith is not and cannot ever be given equality to patriotism because the state will attempt to subject the church to her. This is a pattern of history, and is why the Catholic Church has constantly emphasized that while she makes up both the ruled and the rulers, she is as much the glue that binds them as she is also the barrier that separates them, for the good of both. It is a pattern of history that the ruled and rulers struggle, with each one overtaking the other, in a karmic-like cycle that Christ smashed and will fully abolish when He returns.

A lot of the anti-Catholicism and anti-clericalism of America, especially during the nineteenth century, was defined by Protestant nationalism. However, with the decline of religion all around, there are a lot fewer religious people, the largest bloc of them in the Catholic Church. The secularization of the society has not per se improved these attitudes, and the bad behavior of many clerics has certainly helped to enkindle anti-clerical sentiments once again. The difference here is that unlike before, when it was based on religious differences, even if it was only nominal, it is now a secular intolerance that is seemingly more aggressive, and with more effective tools for accomplishing the same ends.

This is not to say that the above mentioned “Florida man” is secular, or even particularly astute in his criminal actions. Rather, it is to point out that attacks like this against churches are likely going to become more commonplace, and that while this is one event, there has been an increase in attacks and it is part of larger trends taking place in the country and throughout the entirety of a Western world that has rejected God and chosen instead the ways of sodom.

It is also important to mention that we are not seeing a pattern associated with any political party, for the antagonism is on both sides of the divide, but only that the Democrats are, as I have mentioned, more open, honest, and willing to take their beliefs to their natural conclusions in a public way than what the Republicans are, but this in no way diminishes the potency of the dislike that is already present underneath the public veneer. The proof of this can be seen easily in how the GOP, which for so long presented itself as a party of ‘family values’, has so aggressively and passionately worked to embrace all things sodom while ignoring the concerns of Christians, since ultimately all that the party cares for is votes, and the sodomite bloc was determined to be more politically strategic than the Christian bloc.

Take this particular incident for what it is worth. Christians may want to continue to support their nation in as much as one can morally do this, but it must not come at the abrogation of one’s morality, while also bearing in one’s mind that the society at large has turned against Christianity and that it will find reasons to attack Christian places and symbols. Likewise, one should not expect the courts to be favorable in the future towards issues that affect Christians, and to expect harsher treatment from the courts in the event a Christian or Christian organization is accused of a criminal act.

Florida man may be dangerous, silly, and foolish, but he is also very American in who he is and what he does. If Florida man takes it on himself to attack a church, or perhaps more churches, one should be concerned, since Florida man’s actions may not be his own strange ideas, but a reflection of greater trends taking place.