You are here: Home › Can Trump Afford, Fiscally Speaking, To Lose? 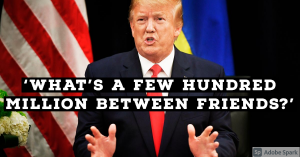 Last night, I took the time to read a breaking story from the New York Times about Trump’s tax returns and the image of his wealth. I emphasize the word “image” because, as you can read in the full report here, that is what his wealth is. Call it an image, mirage, or any other preferable term, but the fact is that Trump as a man is as much as Trump is a commodity marketing a lifestyle that really does not exist for anybody, including Trump himself. The Hill summarizes well the story by noting that Trump has a direct financial interest in winning this election because without it, the man Trump might crumble under the mountains of debt he used to make the image of Trump that he sells to the public.

One eye-catching takeaway from the deep look into Trump’s strenuously shielded tax filings is that Trump loses a lot of money. Like, a lot. He loses millions at his prized foreign and U.S. golf properties, the Trump International Hotel in Washington, D.C., and many of the roughly 500 entities that make up the Trump Organization.

The Times also details how Trump uses those deep-red losses to avoid paying federal income tax, at least in the U.S. There was a two-year period in which he made too much money to avoid paying taxes, thanks to his share in NBC’s The Apprentice, but he then filed for a refund when the opportunity presented itself after the 2008 financial meltdown. That $72.9 million in refunded taxes plus interest is under audit and has been for years, the Times reports. Trump paid just $750 in federal income tax in both 2016 and 2017, the most recent years in the data the Times obtained.

But “the picture that perhaps emerges most starkly from the mountain of figures and tax schedules prepared by Mr. Trump’s accountants is of a businessman-president in a tightening financial vise,” deep in debt with the bill coming due, the Times reports. That raises the troubling question of whether Trump can literally afford to lose power on Nov. 3 — and what he might do to prevent an electoral defeat and financial ruin. (source)

As I noted, I am selecting quotes from The Week, but the original report is worth the long read itself because, love Trump or hate him, the raw data that comes from reports such as tax returns, while they can be manipulated, offer the greatest insight into this person’s life in terms of hard fiscal data.

Debt is a big problem in American life, and there is never, ever, ever such as thing as “good debt” in the same way that one could say there is “little slavery” versus “big slavery”, because ultimately, slavery is slavery. Debt is a form of slavery, and for all of the billions that Trump claims he has and indeed does or did have, he is matched by far more debts to his name and assets.

Love Trump or hate him, Trump’s own data that he provided to the IRS shows an empire based on sand with an ocean rapidly coming in. This is not to say that Biden is better, or that one should vote Democrat, because Biden is also a hive of corruption, drug abuse, prostitution scandals, and other bad things. However, what is fascinating about Trump is that we are seeing, in a public way through this report, the unmasking for the man from behind the mythology he has created.

No one like taxes, but unless one has some very good accountants, some interesting legal maneuvers, or is just a criminal who does not care, everybody has to pay taxes, and in the case of Trump, the Times notes that he owes hundreds of millions to the government, and he doesn’t want to pay because he can’t pay without losing his personal finances.

During the 2016 campaign, Trump proclaimed himself the “King of Debt,” telling CBS’s Norah O’Donnell that “nobody knows debt better than me. … I’ve made a fortune by using debt, and if things don’t work out I renegotiate the debt. I mean, that’s a smart thing, not a stupid thing.” Renegotiating means “you go back and you say, ‘Hey, guess what, the economy crashed,'” he explained. “‘I’m going to give you back half.'” That nearly destroyed him in the early 1990s, after almost all his bets failed in short order.

But the newly obtained “tax records show that Mr. Trump has once again done what he says he regrets, looking back on his early 1990s meltdown: personally guaranteed hundreds of millions of dollars in loans, a decision that led his lenders to threaten to force him into personal bankruptcy,” the Times reported Sunday. “This time around, he is personally responsible for loans and other debts totaling $421 million, with most of it coming due within four years. Should he win re-election, his lenders could be placed in the unprecedented position of weighing whether to foreclose on a sitting president.”

Along with more than $300 million in loans coming due in the next four years for which he is personally responsible, Trump might have to pay back the federal government more than $100 million, including interest and penalties, if the Internal Revenue Service determines he improperly obtained the $72.9 million tax rebate. Trump has valuable assets he might be able to sell (but really doesn’t want to) — but he also currently serves as the top executive of the same federal government that includes the IRS and America’s federal prosecutors.

The kind of corruption being detailed here is particularly fascinating because it has the feel of a Latin American or perhaps African dictatorship in the sense that a man of power who is charged with enforcing laws is also at the center of his own an major corruption scandal and yet by means of his position in government can use his job to shield himself from the same laws he is charged to protect and is naturally subject to. People have warned about how for years, if it was not stopped, America risked taking on the feel and practice of a “banana republic” in that she would have rulers who engage in openly corrupt practices yet still are able to govern and enforce laws on other people. This goes on in practically every nation, and likewise it is known in the US, but the extent and levels of power associated with this corruption is what is so concerning, since it is a sign of a rupture between the rulers and the ruled, and if taken too severe, can result in a situation like that in Russia, where a few wealthy people rule over a nation of impoverished men that are the slaves of a system that they do anything they can to escape.

The likely chance, in spite of media attention, is still that Trump will likely win. However, the image of Trump as a business mogul has been exposed as something not nearly like how Trump has presented himself to be. If he does win, it is a short-term victory for the Republicans, but may come at the long-term cost of the Republican party’s image, and possibly the party itself.

The future is going to be quite interesting.