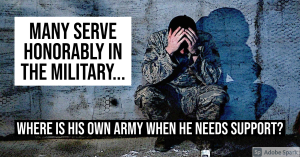 Military life is hard, and it is often made far worse by the fact that it is in the interest of the military, in order to keep ‘ready soldiers’ on call for fighting, to abolish or reduce the number of safety nets or support systems that people need in order to maintain stability and live normal existences. This results in many who, lacking support, falling apart and engaging in self-destructive behaviors. The Associated Press reports according to new data that US military suicides are up 20% this year.

Military suicides have increased by as much as 20% this year compared to the same period in 2019, and some incidents of violent behavior have spiked as service members struggle under COVID-19, war-zone deployments, national disasters and civil unrest.

While the data is incomplete and causes of suicide are complex, Army and Air Force officials say they believe the pandemic is adding stress to an already strained force.

And senior Army leaders — who say they’ve seen about a 30% jump in active duty suicides so far this year — told The Associated Press that they are looking at shortening combat deployments. Such a move would be part of a broader effort to make the wellbeing of soldiers and their families the Army’s top priority, overtaking combat readiness and weapons modernization. (source)

This has been a problem in the military for a long time, and is something that nobody wants to discuss because it would mean treating people like human beings and scaling back on many of the reckless, dangerous, foolish, selfish, or just meaningless ventures that soldiers are used for in the interest of American ‘interests’ in other countries.

Many who join the military say they do this because they want to fight for a nation they love and believe in. They do not join because they want to fight for shareholder interests of major private companies for profits that they will never see but are forced to pay the price in their blood, time, and sanity. It would be one thing if soldiers received a share of the profits, even if it was very small, but this is not the case. Soldiers are far too often treated like expendable chess pieces in a game they did not sign up for and have no control over what happens often to them as they realize what they are in after it is far too late a point in time to seriously change their decisions.

As one who witnessed many soldiers enter the military after the September 2001 terrorist incidents in Hew York, many of those who came out of the military later, regardless of branch, said that they felt mistreated, lied to, and what they signed up for was not what they were subjected to. The worst of these were men who after being enlisted were forcibly ‘recalled’ to active duty and had to go back and fight, sometimes multiple times, and with each time being more abused than the previous one. Some suffered grave health consequences to the point that the person who they once were was no more and they were left as a shell of themselves, and upon being discharged had trouble holding jobs and what ‘care’ the VA gave them was miserable.

The military receives a kind of religious admiration among many Americans, but many of the soldiers are far from honorable and the institution is a machine that propagates abuse. This is not to say that no military is necessary, or that all soldiers are bad, but that the history of the military and the lived experiences of countless people backed up by strong documentation measured against what the institution presents itself as are two very different things. It does not fight for ‘freedom’ and ‘democracy’, but rather is very often used as a tool of foreign policy for rich men who send the children of poor men to do their miserable dirty work and pretend that it is patriotism to have other do this.

This is likely related to the issue of abuse and self-destructive behavior, since once people find out the truth, and then are mistreated, and cannot get help or are told they are ‘losers’ for getting help, they try to escape even if it destroys themselves.

The Pentagon refused to provide 2020 data or discuss the issue, but Army officials said discussions in Defense Department briefings indicate there has been up to a 20% jump in overall military suicides this year. The numbers vary by service. The active Army’s 30% spike — from 88 last year to 114 this year — pushes the total up because it’s the largest service. The Army Guard is up about 10%, going from 78 last year to 86 this year. The Navy total is believed to be lower this year.

Army leaders say they can’t directly pin the increase on the virus, but the timing coincides.

“I can’t say scientifically, but what I can say is – I can read a chart and a graph, and the numbers have gone up in behavioral health related issues,” Army Secretary Ryan McCarthy said in an AP interview.

Pointing to increases in Army suicides, murders and other violent behavior, he added, “We cannot say definitively it is because of COVID. But there is a direct correlation from when COVID started, the numbers actually went up.”

COVID-19 related or not, and even if the numbers are comparatively small in volume it is always a concern to see increased in this behavior because it often means there is a lot of stress among the forces. As noted, with multiple deployments and ever changing laws that leave soldiers in the essential and potentially forever grasp of the military, there are many people who refuse to join because they do not believe that the investment is worth the time or risk.

This also factors into the risk for the future of a major conflict and given that so many do not want to join, the government may attempt to force a draft again simply for the purpose of increasing the numbers of soldiers in their service. This is the major trend to watch for that could come out of the above developments.

Civilian suicide rates have risen in recent years, but 2020 data isn’t available, so it’s difficult to compare with the military. A Pentagon report on 2018 suicides said the military rate was roughly equivalent to that of the U.S. general population, after adjusting for the fact that the military is more heavily male and younger than the civilian population. The 2018 rate for active duty military was 24.8 per 100,000, while the overall civilian rate for that year was 14.2, but the rate for younger civilian men ranged from 22.7 to 27.7 per 100,000, according to the National Institute of Mental Health.

“We know that the measures we took to mitigate and prevent the spread of COVID could amplify some of the factors that could lead to suicide,” said Helis, who attended department briefings on suicide data.

Army leaders also said troops have been under pressure for nearly two decades of war. Those deployments, compounded by the virus, hurricane and wildfire response and civil unrest missions, have taken a toll.

These situations here are exactly those I have noted above. The people of society are stressed, the military is placing the soldiers who enlist under tremendous amounts of stress, there are more deployments, soldiers are forced to go into harsh conditions repeatedly longer and more frequently than in the past, and people are tired of it, and unlike how the attitudes of the military so often seem to indicate, people are not objects, but real human beings who have needs outside of physiological ones. To abuse a man constantly can destroy him, but with a darwinian attitude that posits the value of a man as his expediency to get something done and then throw him away and not care about him until he is ‘needed’ again, this cannot go on lest the people self-destruct or people stop participating in their own abuse.

Roger Brooks, a senior mental health specialist at the Wounded Warrior Project, said veterans are reporting increased suicidal symptoms and anxiety. Between April and the end of August, the group saw a 48% jump in referrals to mental health providers and a 10% increase in mental health calls and virtual support sessions, compared to the previous five months.

Brooks said there’s anecdotal evidence that the pandemic has made wounded warriors like amputees feel more isolated, unable to connect as well with support groups. He said injured vets have seen disruptions in medical visits for pain management and other treatments.

Within the Army, Helis said the virus has forced an increase in telehealth calls and online visits with mental health providers. That has generated some positive results, such as fewer missed appointments.

“And we also think there was a reduction in the stigma of seeking behavioral health because you can do it from the privacy of your home,” he said.

In the words of one soldier that I knew who experienced tremendous issues after returning from his deployment, having been re-deployed multiple times and suffered tremendously, he re-enlisted because when he went to get counseling, after being berated, mocked, and verbally abused by his supervisors to the point he had a mental breakdown, the ‘counselor’ the military assigned to him instilled in his mind that he was a ‘war machine’ and because of that he had to re-enlist.

This kind of behavior is what I refer to as the religious nature of the military, that instead of being a force looking out for the interests of the nation, it takes on a cult-like status and treatment of its members that serves the interests of no one. This is not to say that one should not treat people well, but that the mythology associated with this particular institution needs to be put aside so that the truth, good, bad, and ugly, can be seen and evaluated.

All nations need militaries, especially a nation like the US, but one cannot have an effective military if the people who make up the military are destroying themselves, and because this happens for reasons that one can uncover, it is in the interest of all to understand why and stop the behaviors that cause it. That is to say, presuming that one cares about one’s fellow man and believe that the interests of these people correspond to those of the person in charge of or using the military, and if not, to ask then why such is the case and re-evaluation one’s priorities in accordance with this.

Can Trump Afford, Fiscally Speaking, To Lose?
In This One Example, Trump’s Campaign Can’t Accurately Be Accused Of Racism
Follow