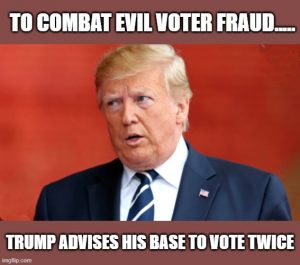 Trump for many years was a Democrat, until he went with the Republican party for the presidential elections. It is also known that the Democrats have a long history of “voting twice” and “making the dead vote”, by rigging elections with multiple votes or votes from nonexistent or deceased persons.

According to a recent statement from Trump reported on by multiple sources, he suggested that because of ‘unfairness’, that Republicans may want to vote twice- first by absentee ballot, and then in person.

President Trump twice on Wednesday urged supporters in North Carolina to vote two times in the presidential election, once by mail and then again in person, ostensibly to test his unsubstantiated claims that mail-in voting will be rife with fraud. “Intentionally voting twice is illegal, and in many states, including North Carolina, it is a felony,” The Washington Post notes. Attorney General William Barr either does not know that or he was just being coy in an interview Wednesday evening with CNN’s Wolf Blitzer.

Blitzer read Barr what Trump had said, and Barr suggested Trump was just “trying to make the point that the ability to monitor this system is not good.” Blitzer pointed out that if anyone followed Trump’s advice, they would be breaking the law, and Barr responded, “I don’t know what the law in the particular state says.” He added he’s not sure if it is illegal to vote twice in any state, then claimed that widespread mail-in voting “is very open to fraud and coercion, is reckless and dangerous, and people are playing with fire.”

“Multiple studies have debunked the notion of pervasive voter fraud in general and in the vote-by-mail process,” The Associated Press reports. The Post noted that its own analysis of mail-in voting in three states where it is the primary means of casting ballots found 372 possible cases of double voting or other fraud out of 14.6 million ballots mailed in for the 2016 and 2018 elections, a potential fraud rate of 0.0025 percent.

If you try out Trump’s idea in real life, you will either be blocked from voting in person or your mail-in ballot will be “spoiled,” Patrick Gannon, spokesman for the North Carolina State Board of Elections, told The New York Times. He suggested that if you are worried about your mail-in ballot, rather than commit felony vote fraud, track its progress on the board’s website. (source)

Now one can make the claim that Trump was just trying to make sure that everything will be ‘fair’, but is that all?

Does it not seem very odd that Trump would make a statement like this, especially at a very politically rancorous time in American history?

Trump did not outright say ‘cheat the system, go vote twice/as many times as you can.’ However, what else is one to take from Trump’s statement in North Carolina other than he is suggesting that it is only ‘fair’ that people vote twice?

Can one say ‘well Trump was just joking’ given his tone and the context in which the statement was made?

His actions concerned the state of North Carolina so much that voting officials and prosecutors made an official statement to NBC News that voting twice, even if it is just to ‘test the system’ as Trump said, is a felony and not to do it.

Clearly, election officials and prosecutors were not convinced that Trump’s message was meant in good faith. This does not say anything about their personal political views, since while personal views can influence anything in how a man chooses to deal with a problem, illegal is always clearly illegal, especially in obvious cases such as this.

There is no “nice” thing that can be said about Trump’s comments here, because it is arguably impossible to imply he was not seeking another conclusion other than to encourage people to do illegal activity.

While it is known that Democrats and Republicans have done ‘funny business’ with politics and elections, Trump openly encouraging this behavior, like his way of speaking to others and changing what is acceptable political discourse, is also tied to behavior.

If a president says that cheating in an election is OK, and he is a Republican, will a Democrat not at some point in the future point to this and say “why not us”?

What I am saying is that principle exists for a reason, and while claims about what Trump may or may not have said have been made by many, it is very clear just by his interactions with Chief Justice Roberts about going “directly” to the Supreme Court versus following the processes set up by the court system is indicative of the contempt that he has for law and order- that is, the attitude of law and order for thee, but not for me.

Is The APA Making An Andropovesque Proposition?
Nova Scotia Woman Loses Appeal To Stop Her Husband From Committing Suicide
Follow