You are here: Home › Houses Get Bigger But Apartments Get Smaller 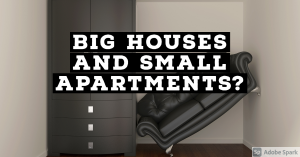 Something that tells a lot about a society is the use of space in new construction, as while renting is good, new construction is built always with contemporary values in mind, and so it can give an insight into the minds of the people at that time. According to a story from Zero Hedge, among new construction, single-family homes are growing in size, while apartments are shrinking.

Like so many other aspects of the American housing market, an examination of the change in average size of newly built homes and newly built apartments constructed between the years 2010 and 2019 has yielded a story of two conflicting extremes.

In the market for single-family homes, the average unit size increased over the course of the decade, perhaps reflecting the growing economic inequality endemic to the American middle class.

Meanwhile, the average apartment constructed during this period shrunk by a staggering 90 square feet, a surprisingly large sum when one considers how many New Yorkers live in 500 square foot studio apartments.

A new study from StorageCafe examining trends in newly built homes should be of particular interest to investors as the boom in home construction reverberates throughout the financial markets, driving the surge in lumber prices, among other things.

Jacksonville is building the biggest apartments in the US at 987 square feet, and Seattle the smallest, with new apartments averaging 676 square feet.

During these last few months, we spent more time inside our homes than probably at any other point in our lives, and the size of our residences became all-important. The COVID-19 pandemic will probably have a long-lasting impact on how Americans – and the whole world for that matter – live and work.

As far as home sizes go, we might be witnessing a revolution regarding how people utilize their houses and the new roles a home must fulfill – more than just living quarters, many of our homes have been converted into multifunctional spaces that can accommodate our work, recreational and educational needs, and more. The good thing is that newly built homes are offering more space, just enough to allow for comfortable living. Apartments, however, lag behind in responding to this need for more space at home.

It looks like the US is bound to remain the land of McMansions. With the average home size standing at around 2,128 square feet (US Census), American homes are among the biggest in the world, vying with Australia for the top position. Compared to European countries, US homes are much more spacious, and even twice as big as houses in Greece or Germany.

Apartments are following an opposite trend, decreasing by almost 90 square feet over the last decade, from an average size of 1,245 square feet in 2010 to 1,156 in 2019. In other words, newer apartments were built with less space – and that loss is equal to a small bedroom or a kitchen.

Nearly half of the single family homes built in 2019 have 4+ bedrooms. (source)

First, is the obvious increasing gap between rich and poor. The rich can have more, the poor less, and this is expressed in the use of space and what kind of space is affordable or accessible.

Second is the redistribution of populations. While a lot of people are fleeing to the countrysides, cities are going to continue to grow into “megalopoli” because that is where the work is, even in an online world. It will be the fortunate few who can always ‘work from home’, because at some point, people need to be physically present to work.

Third, and most significant, is the decline of the family. It is not that the rich are having more children- they are not from what the data shows -but that those who are poor and young are having even less, hence the need for reduced space in apartments. Homes may be larger, but that is an expression of power and wealth, not family size or practicality.

What one seems to be witnessing here is the emergence of two Americas, as noted by many. The first one is a wealthy one, who can do what they want when they want as they want. The second one, and the majority, is poor, miserable, and living like rats in increasingly tightened spaces.

In other words, the USA is looking a lot more like the USSR as time passes. The use of space just reflects this larger trend in what is a domestic arrangement.