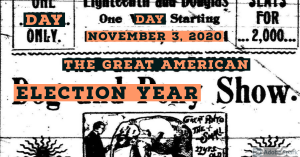 One may remember the year 2000, where during that presidential election, amid chaos and confusion, Florida was the ‘swing state’ that swung the election from Al Gore to George W. Bush.

Now there are still a LOT of questions about that election and the ‘vote counts’ that went on, and with good reason. But speculation aside, the courts ruled in favor of Bush, and he went on to become our next president.

for the past several months, and really the past year I have warned that a toxic combination of Trump’s failure to make good on his promises, a serious Boomer-Millennial divide, and now the chaos in relation to the current situation with the handling of the COVID-19 coronavirus, there is a strong possibility that election chaos will ensue that will propel Trump to the office of the presidency. Such concerns are being expressed in many states amid questions about “mail-in” voting, and as Zero Hedge notes, the highly controversial state of Illinois finds herself as of them.

The Illinois General Assembly held no hearings when it passed legislation this spring to vastly expand mail-in voting in the state. That’s right, no hearings were held on historic changes to the most important element of a democratic republic – the voting process. The legislation passed both houses on a nearly straight party line vote with Democrats supporting and Republicans opposing.

Troubles loom, though Illinois may be in better shape than many other states for the November 3 election. One thing certain is no final results in close races should be expected on election night, in Illinois or nationally.

The primary change Illinois made was vast expansion of vote by mail for this election. Anyone who cast a ballot in the past three years or who registered to vote or changed addresses after the March primary is being sent an application. Other eligible Illinoisans can request a mail ballot online.

That means mail-in votes will be far higher than ever before.

llinoisans have already requested nearly1.5 million mail-in ballots. At that pace, over 25% of ballots cast probably will be by mail. That’s far higher than in recent elections. According to data we got from the Illinois State Board of Elections, mail-in ballots comprised just 9.3% of the total vote in the 2018 general election and just 9.1% in this year’s primary. In 2016, mail votes represented 6.5% of total votes in the general election.

In Illinois, mail in votes will be processed as they are received by county clerks, who are assigned that task. That’s why election officials prefer you send ballots in early. However, those will not be totaled until polls close at 7 P.M. on election night.

But that’s not the end. Illinoisans have until October 29 to request a mail-in ballot and have until November 3 to postmark their ballot, so election officials will be tabulating those until November 17, and final counts won’t come until after that date. How long that will take clerks is uncertain because the volume is uncertain.

That delay may be acceptable, but the bigger risk is litigation that could drag out close races. Suppose somebody finds a bag of ballots thrown in the garbage, or ballots are rejected because of a faulty postmark, or printed with an incorrect address, or bounced because the voter forgot to sign or signed too sloppily to match the signature on record, or any of many other potential problems. How hard will it be to find a political or activist judge in Illinois willing to intervene, especially when genuine voting rights are at issue?

The risk is there, but probably lower in Illinois than some other states. National stories abound about, as a Stanford election expert put it, Bush vs. Gore “on steroids,” a reference to the 2000 presidential race that ended up in the Supreme Court. Many other states have a worse deadline structure than Illinois. Voters in ten states don’t even have to request a mail-in ballot until November 2.

Litigation is already abundant. At least 300 lawsuits over voting and ballot procedures changed to address concerns about coronavirus have already been filed across 44 states, including seven in Illinois.

The Biden campaign alone has 600 lawyers geared up to litigate. Nationally, this may well be a fiasco unless the election is decided in a landslide.

Illinois law requires voters who submit an application for a mail-in ballot before Oct. 1 to get their ballot no later than Oct. 6. That means many will cast their votes even before two of the three the presidential debates, which are scheduled for October 15 and 22. Debates for many other offices will also come after many votes have been cast.

Then there’s the widely discussed issue of fraud and meddling. A common answer is that there’s “no evidence” of extensive fraud in voting by mail, but the problem is establishing the evidence either way. It’s just not easy to prove or disprove.

Unquestionably, the potential for fraud or meddling is there. The young person who checks granny’s mail once a week could easily fill out the ballot for her. The guy now residing in Indiana who had his application for an Illinois ballot sent to his residence might use it. A postal worker in an area that votes heavily in a way the worker doesn’t like could trash or delay a batch. Those would be felonies. Maybe they will be rare, and maybe both sides will do it, but who knows?

Illinois, believe it or not, is blessed with a good, nonpartisan oversight board – the Illinois Election Commission. It deserves credit for keeping the 2018 election mostly problem-free, despite extraordinary turnout. However, the General Assembly made the most important rules, not the Commission, and the Commission will have no control over litigation about those rules. And vote counting is for county clerks. Most are claiming they are prepared, but concerns linger.

You’d think that would be the end of the game – Republicans would be happy and Democrats would accept the legal result, right? Somehow, however, they still envision lawsuits, riots and resistance, yet they say it’s Trump they fear. And there’s Hillary Clinton’s recent advice to Biden not to concede the election under any circumstances. (source)

Many have said, including myself, that politicians are selected and not elected. The situation between Trump and Biden seems to be absolutely no different. The chances of Biden actually winning are statistically speaking rather low as many have noted from a strictly pragmatic viewpoint (such as Michael Moore), and ironically, “voter corruption” in favor of Biden may result in Trump’s favor since Trump would, by extension from this, be able to point to it and say “look what those evil people who hate me are doing” and use it to direct not only from his own misfortunes (and possibly voter fraud committed to benefit him) and have him be re-elected.

It is strictly one’s guess what may happen in the coming election. However, what one can say for sure is that it will be nothing more than a continuation of the current political “dog-and-pony” show that has been going on for a long time and that no fundamental changes should be expected to happen at all. Likewise, if the Republicans do win, it would be in their direct favor to enjoy it, since it will likely be at least for the next eight years following until they would have a change to re-take the Oval Office again.

So let the lawsuits fly, the accusations grow, the conspiracies be expounded upon, because the show is just getting ready to start.