You are here: Home › Married Democrat Politician Caught With Male Prostitute In Hotel Officially Declares He Is Bisexual 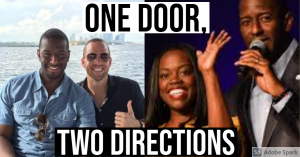 In March 2020, Shoebat.com covered the case of Andrew Gillum, a Democrat politician who was caught in a hotel room with a male prostitute. Given the circumstances and of how methamphetamine was present, that there may have been the practice of “slamming” taking place. But regardless of the specifics (other than the obvious, for one rarely invites a male prostitute to his hotel room in secret for purposes that are purely moral in their nature), Gillum has now spoken publicly about this tryst, to which he has told People magazine that he identified as bisexual.

Andrew Gillum told Tamron Hall in a sit-down on Monday that he is bisexual — a revelation as part of his first interview since he was caught in the middle of a scandal in March that led to him enter rehab and retreat from his once-promising career.

The Democratic politician, who lost the 2018 Florida governor’s race by less than half a percentage point to Ron DeSantis, made headlines this spring after he was found drunk in a hotel room with another man who may have overdosed on drugs and was treated by responders, according to local police.

Authorities also said that a substance suspected to be meth was found in the room, though Gillum said he had only had alcohol.

The other man identified himself as an escort through the website Rent Men, according to a local TV news article. He told the Miami New Times in March that he and Gillum had been “friends for a while.”

Gillum, 41, addressed the speculation fueled by that encounter when he spoke with Hall in the season premiere of her talk show on Monday.

“The truth is, is that, Tamron, everyone believes the absolute worst about that day. At this stage, I don’t have anything else to have to conceal. … What was most hurtful was this belief that I was somehow living a lie in my marriage and in my family,” he said.

“To be very honest with you, when you didn’t ask the question, you put it out there, is whether or not I identify as gay. And the answer is, I don’t identify as gay, but I do identify as bisexual,” he continued. “And that is something that I have never shared publicly before.”

Gillum spoke with Hall in the emotional interview alongside his wife, R. Jai Gillum.

Hall, 49, told PEOPLE last week that it was “one of the most difficult interviews I’ve ever conducted” and their conversation was “intense and at moments it was heartbreaking, upsetting and it was disorienting.”

“I literally got broken down to my most bare place, to the place where I wasn’t even sure that I wanted to live — not because of what I had done, but because of everything that was being said about me,” Andrew told Hall.

Photos from the scene also circulated in corners of the internet, including one of an unconscious Andrew “on the floor … literally lying in my own vomit,” as he told Hall.

Speculation about Andrew’s private life swept across social media after it was reported the former Tallahassee mayor was found in the hotel in Miami, where he said he had traveled to officiate a friend’s wedding.

Authorities also told PEOPLE at the time that the incident was not being treated as a criminal matter and Andrew was not charged with any crime.

He said Monday what helped him through the immediate aftermath was “the grace that I received from my wife.”

“This was without us knowing whether or not there would be a future Andrew and R. Jai,” he told Hall. “At this point, this was her caring for me as a human.” (source)

It is most interesting that such things are not even ‘scandals’ anymore, in that being a door with hinges that can go in either direction is practically regarded as the new normal, and those who uphold objective moral teaching as it has always been propagated are considered to be the strange and problematic ones.

This is the future we have chosen were the world is now a new Sodom, and one remembers what happened to Sodom, except now that it has engulfed the planet, would one be surprised at this point if, be it a meteor, nuclear fire, or other means, that fire did fall from heaven and in doing so, wipe out large numbers of people?

It is counsel to the wise at this point to prepare oneself accordingly, for as the progression of this and other ideas further ingrain themselves into society, so the time of mercy will close and eventually force the hand of justice, for God is very patient, merciful, and understanding of human frailty, but he is also just and will not be mocked and will see to it that right is restored.

African Tourism Industry Destroyed By COVID-19
Will There Be An ‘Armed Insurrection’ After The 2020 Election?
Follow