You are here: Home › Trump Shows Signs Of Concerning Behavior In Interviews With Major American Journalist 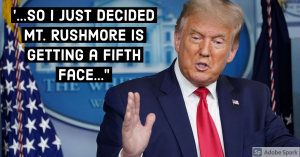 According to the American Psychological Association in their Diagnostic and Statistical Manual, which is the official manual used for diagnosing mental health issues, a person has narcissistic personality disorder if he has five of the nine or more traits:

-A grandiose sense of self-importance
-A preoccupation with fantasies of unlimited success, power, brilliance, beauty, or ideal love
-A belief that he or she is special and unique and can only be understood by, or should associate with, other special or high-status people or institutions
-A need for excessive admiration
-A sense of entitlement
-Interpersonally exploitive behavior
-A lack of empathy
-Envy of others or a belief that others are envious of him or her
-A demonstration of arrogant and haughty behaviors or attitudes

It is difficult to argue, based on watching Trump’s behavior over the years and now that he has been president for the past four years, that he may not have such, for he has shown strong indications of all nine characteristics over an extended period of time. It is not uncharitable, or an exaggeration to suggest that, from a purely objective view based on the above criteria, Trump may have a serious case of narcissistic personality disorder.

A lot of people have brought attention to this issue because there are a lot of people who are concerned about him. Such another example of this behavior was seen recently as an article from the Washington Post via Chron noted, in which Trump bragged about his appointment of justices to the courts and compared himself to George Washington.

Now, as Trump prepares to announce a nominee to replace Supreme Court Justice Ruth Bader Ginsburg, who died Friday night at age 87, those interviews reveal a president animated about remaking the courts and working with Senate Majority Leader Mitch McConnell, R-Ky., to appoint conservative judges. Some of the conversations were chronicled in Woodward’s new book, “Rage,” while audio recordings of others were obtained by The Washington Post.

In a mid-December interview with Woodward, Trump boasted that he and McConnell “have broken every record” on judges, saying the issue is the majority leader’s top priority.

“You know what Mitch’s biggest thing is in the whole world? His judges,” Trump enthuses, explaining that faced with a choice between pushing 10 ambassadors or a single judge through the Senate, “he will absolutely ask me, ‘Please, let’s get the judge approved instead of 10 ambassadors.’ ”

In January, the president bragged that he had installed 187 judges to the federal bench – making 1 in 4 circuit court judges a Trump appointee – and two to the Supreme Court.

“The only one that has a better percentage is George Washington, because he appointed 100%,” Trump told Woodward, a Pulitzer Prize-winning journalist and Washington Post associate editor. “But my percentage is, you know, like, ridiculous.”

During a May interview, Trump also crowed about how President Barack Obama had left him more than 100 court vacancies to fill when he took office, referring to them as “golden nuggets.”

The numerous judicial slots Trump was able to fill upon entering the White House were a result of McConnell’s deliberate effort to block and delay Obama’s nominees – reducing the confirmation of judges to the slowest rate in more than 60 years. (source)

As noted, this is an interesting time because the death of Justice Ginsburg so close to a presidential election makes for a more interesting political show than what one might expect. In other words, grab the popcorn and a soda, because things are about to get fun.

Now I recently discussed Woodward’s new book, and while I have not read it myself, and regardless of one’s opinions on Mr. Woodward, the man is a respected journalist with a distinguished history and record. One may or may not like him, but he cannot be written off as a simple fool or a pointless name. What he says does carry weight in the world of academia and politics, and when he notes that Trump is making bold comments about himself and his actions and how it concerns him, it should be considered seriously.

I have also noted in the past that Trump has shown contempt for the judicial system, in which he was publicly rebuked by major justices in the Supreme Court for threatening the integrity of the courts and with it, the stability of the judicial process by trying to “bully” his way outside of the process with the excuse that he is the president and his concerns therefore are more important than other cases.

Now we see here Trump turning back to the court system and lauding it, not because he appreciates the process, but because he attributes what he sees as positive changes in it to himself and his actions, and so much that he is willing to compare himself to major American heroes.

This is not helping the court system. Indeed, the opening up of any justice seat is a serious matter, and especially when it comes to a Supreme Court justice. The greatness of a president is not in the volume of justices appointed, but the quality, and given Trump’s behavior, volume would theoretically work against him, for since he has shown himself to be generally feckless in keeping his promises to his base on small issues, it is natural to suspect that he would not do such for larger things.

It is what I have been warning about. Trump has been given multiple chances, and it is almost each time he shows himself by choice to be the opposite of what the people wanted in him.

Trump, for his part, has raged against Woodward and the book, trashing them both in campaign rallies and tweets. “Bob Woodward’s badly written book is very boring & totally ‘obsolete,’ ” Trump wrote in one tweet, dismissing the author as “just another tired, washed up Trump Hater.”

On judges, Trump – who has made more than 20,000 false or misleading statements during his presidency – has frequently overstated the number of judges he has named to the bench. In a March interview with Woodward, he claimed that he had just signed his 220th judge and expected to be at “260, 270, maybe even 280, maybe even 300” by the end of his first term. As of this week, the Senate has confirmed 216 of Trump’s judges.

Still, remaking the bench with conservatives is one of Trump’s key accomplishments, so much so that Woodward responded with a joke: “Maybe they’ll put a statue of you outside the Supreme Court.”

Woodward’s comedic remarks are well-deserved, and also have an important point- that Trump needs to tone down his statements.

It is very upsetting that Trump has made such untrue statements, and while some may be debatable, many are not, and have the sense of arrogance that has become characteristic of Trump’s behavior and presidency.

Trump was not elected to brag about himself. He was elected to represent the people and help guide the country in a difficult time. His arguably unexpected and unique circumstances of his election allotted him a chance given to few in history to make wrong things right and to fix problems that needed to be addressed, for while Trump is not perfect, he had the chance to mitigate the full effect of decades of bad decisions.

But he did not do this. Instead, his position has served only to puff up his already inflated ego and to make matters worse. As I have noted, his money-printing in response to the financial effects of COVID-19 is precipitating a future hyperinflationary scenario, especially as more money was spent on that bill than in all the budget for 2019. Obama, as much criticism as he deserves, never did anything to that extent, and thus Trump’s betrayal is not only to the country, but to his own party and the promises he made which brought him into office. This does note even touch on how the stipulations for many of the corporations who took bailout money guarantee a government stake in those corporations, which in a silent way implemented fascism as a policy without it being publicly stated or understood to the public.

This is also not to say that Biden is good, or that I support him. The only charitable thing that can be said about Biden is that his statements and actions, love them or hate them, are clear and consistent for all to see. The same cannot be said about Trump, who publicly promoted one view and convinced people to support him, and then did the opposite while still claiming he fulfilled his original views, and then criticizes those who point this out.

Trump’s narcissistic behavior, one may say, borders on a veritable attack on the sanity of his own supporters and critics. This latest collection of his remarks about his work on the courts is just an extension of this behavior.

It is ultimately not about the courts, or even Trump’s opinions, but the fact that for all of the criticism that is rightly thrown at Biden, Trump shows a like dangerous sign in his own self-assurance to the point of recklessness and even daring to risk wrecking the rule of law. As the article later notes, when Trump was talking with Woodward about a ruling on the Supreme Court which he disagreed with,

“Well, maybe you can appoint yourself,” Woodward joked.

“I am what’s good for the people,” Trump responded. “All people. So, you know, that’s where I am.”

The bold emphasis is mine, and it speaks for itself.

Regardless of what candidate one supports, it is always important to have a balanced view of him, for good and for bad. Politicians are human beings with faults and good points too. However, the continued polarization of American politics where candidates are elevated into cults of personality prevents many from taking a balanced approach when looking at men for who they are in their totality, yet it is in such contentious periods of history when this is most needed.