You are here: Home › Is It Possible That A Biden Victory Might Actually Help The Republicans Long-Term? 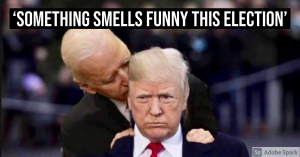 While Trump still shows strong possible signs of victory this fall, there is a lot of talk that Biden may win, with FOX News discussing more economic signs pointing to a possible future Biden victory.

The recent direction of the U.S. dollar points to former Vice President Joe Biden defeating President Trump in the upcoming election, but a lot can change before Nov. 3.

The U.S. Dollar Index, which tracks the dollar against a basket of its peers, has climbed 0.9% since its July 31 close.

A weaker dollar in the three months ahead of the election typically favors the incumbent party while a stronger dollar has been good news for the challenging party, though the direction of the greenback has no real impact on who wins. Still, the index has correctly predicted seven of the last eight election winners when using that measure, according to Ryan Detrick, chief market strategist at LPL Financial.

“As we saw back in March, when trouble hits, the U.S. dollar tends to do well, as investors flock to the safety of the world’s reserve currency,” Detrick wrote. “When things are calm, the dollar tends to weaken, which favors riskier assets.”

The U.S. Dollar Index surged by 10% from March 9 through March 20 amid a global shortage as governments ordered lockdowns to slow the spread of COVID-19. The index has since fallen 8.2% as the global economy has begun to slowly emerge from its sharpest downturn of the post-World War II era.

A lot of people are afraid that a Democrat win might be a terrible loss to the country. However, I would like to say here, that the contrary might be true. (source)

Make no mistake, I do not want to give the impression that I am supporting the Democrat party or Democrat policies, many of which are very evil. Rather, I am working from the following presumptions:

1) Both parties adhere to the same fundamental philosophy, differing merely in accents
2) Both parties do not care about the common man or the common voter
3) Both parties seek their own survival and gain before the good of any others
4) Given that there are only two real party choices, both are subject to the ‘flows’ of popular temperament

Likewise, we know the following things:

1) A series of policies for decades and now greatly exacerbated under Trump show a strong possibility in the future (less than ten years and based on historical patterns) for a hyperinflation of the currency.
2) The riots, chaos, and disorder are ripping apart the social order and making a lot of people upset
3) The Republican base is extremely demoralized by Trump’s failures to follow through on promises
4) The Republicans NEED a major series of events to reverse long-standing demographic trends that threaten their survival

Now how would a Democrat victory help the Republican party?

In the short term, the obvious answer is NO, it would not, because the Republicans would not be in power, and the Democrats would try to ‘force’ as many changes as fast as they could on the public, including attempts to liberalize even further very bad practices, such as abortion and other forms of euthanasia or onerous taxation.

However, note the above things about the state of the nation. There really is very little that any president can do to stop or better the situation for any party. In addition, it does not matter who is the president, because when chaos gets worse, the party in power is the one that is going to be blamed for the chaos regardless if that party caused it or not.

This is the lesson to be learned from the Republican Herbert Hoover, who ascended to the White House in 1928 and was blamed, right or wrong, for the Stock Market Crash of 1929. The result, politically speaking, was a Democrat takeover of the White House that lasted until 1952 and the writing down of FDR and Truman into American history as great presidents.

The US is at a similar historical crossing today. She is heading for MAJOR fiscal insolvency, and it does not matter who is in office, other than whoever is in WILL be blamed.

I have said before that Trump has a history of bankruptcies, and his legacy may be that of bankrupting the American Empire. But what if Biden was to get into office?

A Biden victory would mean that any problems- including the fiscal issues that stand a serious chance of happening -would go on his watch. Remember that the CBO predicts, as Shoebat.com reported, that by 2023, US debt obligations will officially exceed the size of her economy. When such situations happen, it is almost always an indicator or a major economic crisis. If we think COVID-19 right now is bad, wait for something like this to happen.

This is just one issue. Imagine if, under a Biden presidency, there are more “BLM” riots, and more internal chaos. Given that the Democrat party has so aligned herself in her members with these people in many ways, it will be hard for them to break their image of support.

It doesn’t matter what race a man is. Having constant chaos and danger on the streets does not merely encourage racism (in the case of target particular ethnic blocs associated with said violence), but will drive normal people of all backgrounds to oppose any rioters. The biggest opposition would most likely (based on observations) come from the White bloc, which would likely pull support from not just Boomers but generate support among Millennials and Zoomers for the Republican party if they can present themselves as having a ‘solution’ to the riots, and may pull large numbers from the critical and growing Hispanic bloc, that while overwhelming Democrat has shown a potential for political diversification under the right conditions. Even the Black bloc, which still inclines in a supermajority Democrat, may see younger people, possibly even in double-digit numbers (for the first time in a long time as well) defect in a serious way to the Republican party.

If the Republicans were to win, yes, they would in power, but any problems that happen would be blamed on them. Likewise, if Trump was to continue to fail to keep his promises, which is likely, he will also ensure a Democrat victory in 2024 as well as giving the Democrats the opportunity to present themselves as a political ‘savior’ and thus ensure themselves even more power. With a naturally growing Democrat base, furthering those conditions may put the Republicans on the path of the Whigs of the nineteenth century.

I’m not saying that Biden is or is not going to win. I am absolutely not lauding the man or encouraging support for him. Rather, I am saying that a Biden win, depending on how political circumstances go, may actually be a short term loss but a long-term gain for the Republicans depending on what other circumstances happen, and that a Republican win will be a short term gain, but may turn into a long-term loss and potentially a terminal blow for the Republican party’s existence if they are not very careful about how they play their political cards.

Regardless of what happens, it is quite the soap opera that we are witnessing, and it will certainly be remembered in history.

Major Turkish Journalist Warns: ‘Don’t Be Surprised To See Hostilities Spark Between Turkey And Russia In Syria By October.’ This Is Being Said As Turkey Is Running 150 Training Camps For Rebels In Syria
Every Time There Is A Riot, It Helps Donald Trump
Follow