You are here: Home › The Electronic Overlords Cometh 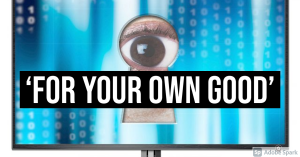 One of the trends that I have warned about for years is the rise of artificial intelligence and robotics. While it offers many promising and good things, a machine is not a whole substitute for a human being, as with all of man’s flaws, the nature of man as person endowed with a soul and above the animals makes him able to perceive and judge overall better than any computer, for this is more than a simple matter of “right” and “wrong”, but dealing with complex nuances and the ability to see through consequences that a program is not built to so. CNET reports as such an interesting story where Amazon’s Alexa robot is now being programmed to be ‘smart’ and to do things like act on impulses, such as a baby crying, or other sounds.

From listening for your newborn’s cries to switching off lights without being asked, Alexa is about to take a more active role in your smart home.

Amazon’s annual hardware event has come and gone, and with it we’ve seen a slew of new Alexa features for your Echo speakers, displays and other voice-driven devices. Alexa continues to expand its reach, connecting with over 140,000 smart home devices, and boasting more than 100 million Alexa-compatible devices installed across its user base. But the voice assistant’s power isn’t just in its rapidly growing scale. (source)

Note the keyword here is ‘smart home’. There has been a giant push to make new homes ‘smart’, so that main functions like locks, security, heating, and so forth can be controlled by the Internet.

However convenient this may sound, the reality is that even the strongest of systems can be hacked, including your home. The real fear is not from “hackers”, but rather from malicious people in positions of ‘legal’ power who are able to use the inherent and natural security flaws in any system to break into your home and not just spy on it, but control it.

This is not a “conspiratorial” fear, but something rooted in simple fact. What proof is there that Amazon, or the government who gets a wiretapping order (or possibly not), or even a bored employee, would not spy on these systems other than the trust of the people who run the system that they won’t do it?

Do you really trust corporations? How many more scandals must there be to show to the public that the operational pattern of companies is to take as much as they can from the common man, sell it for the highest dollar value possible, and deny the one they took the value from as much equal exchange as possible?

Likewise, what if an ‘error’ happens that locks a man in his home? What if they system decides that the very homeowner is a threat, for whatever reason, and calls the police on him, in the name of his ‘own good’? What happens if there is another malfunction?

Here is a video from a few years ago of a dad with his child trying to use ‘Alexa’. The system has trouble understanding the child, and during the video, thinks that the child says something very, very explicit. This is a funny example, but it has a serious meaning. If this system was allowed to continue, it would have played something very bad for a child- and this is just music. If Alexa can make genuine errors such as this, what does one say when there is a serious error of like magnitude involving security, or personal safety?

It’s not just this one kid. There is a lot more videos from Youtube noting concerns about this.

When I spoke to Daniel Rausch, Amazon’s vice president of smart home and Alexa mobile, before the hardware event, he said Alexa is becoming more independent too. Alexa will soon be able to act on Hunches without asking, to listen for and react to sounds other than a wake word, and to protect your home more actively with an upgrade to Alexa Guard.

All this will lead to what Rausch called “the ambient home,” in which Alexa is “ready to respond [to voice commands], but is more predictive and proactive.”

Predictive is the key. It sounds nice, but this is not good because it is behavioral training alongside a machine taking the place of human thought. There will be benefits, but surrendering one’s decision making capacity to a machine means a greater loss of freedom than what has already happened.

Likewise, ‘predictions’ are not always good. This is a computer spying on people and making decisions for him. Facebook is bad enough- this is far worse because this is, not as an exaggeration, convincing people to invite the government into their homes to spy on their daily lives and think that it is for their own good.

The company is now offering something called Alexa Guard Plus, a subscription service that runs $4.99 per month, and it adds a few features on top of the standard offerings. First, Guard Plus will add a more robust “sounds of activity” detector, which will listen for doors opening or closing and other sounds associated with unwanted visitors. Second, Guard Plus will bring deterrence features, for instance triggering Alexa to play a recording of dogs barking if a security camera catches someone sneaking around the back of the house while you’re away. Finally, the Guard Plus will add a new hands-free emergency help line, run by a third-party company, to connect users to emergency services like police, the fire department or emergency contacts.

For over a year now, Amazon has been ramping up the use of Hunches — those instances when Alexa suggests an action, like locking your front door as you’re turning off lights for the night. In fact, of the smart home actions that occur via Alexa, Rausch says one in five are initiated by Alexa itself, rather than via a user’s voice command.

A genuine question- how is this going to make a man’s life safer or better? Is one really that lazy that one cannot remember or care to service basic needs? Likewise, while such things may prevent crime to an extent, it is going to come at the cost of something far more valuable, which is one’s privacy and rather subjecting oneself to constant surveillance.

What is most fascinating about this is that many people will choose to submit to it and will even pay for it, adding to the irony that men are paying to be spied upon perpetually and liking it.

In addition to responding to Amazon’s traditional wake words for Alexa, such as “Hey, Alexa,” or “Hey, computer,” or even “Hey, Samuel,” for you Samuel L. Jackson fans, soon you’ll be able to trigger routines with different sounds, such as a dog barking, a baby crying or someone snoring. Rausch said these sounds will work similarly to the wake word, allowing you to trigger various smart home actions, for instance turning on your bedside lamp when your newborn cries or turning off the TV when you begin to snore.

According to Rausch, some of these sounds, such as a baby crying, won’t be sent to the cloud, to maintain privacy. But this new feature will certainly raise questions about privacy, especially around how broadly Alexa interprets various sounds as a specific kind of trigger.

He says that some things ‘won’t be sent to the cloud’, but where is the proof of that other than his word? There is NO proof outside of this, and if a man seriously believes that this tool will not be used to spy on the users, than one must ask if such a person is delusional, insane, or supports such spying, because the proof is so abundant in this.

One only needs to look at what has come out with WikiLeaks, where internal government documents detail at length how the government pressed major manufacturers to add spyware or the potential to spy on people in most electronics so that they could be tapped at any time. It did not matter that it was illegal, unethical, and immoral- they did it anyways because these people don’t care about you or your good will as their actions indicate. How much more does one need as evidence to prove this?

Even if such things truly aren’t sent now, who says they will not be sent in the future? There is no guarantee of anything, and if historical patterns are a guide, one is a fool to think that they will change.

It does not matter what this new “Alexa” is going to offer, and as I have said before, I am not against technology- rather, one must be aware of the opportunities for abuse and to know that humans tend to abuse tools to hurt their fellow man in the worst ways.

This expanded use of spying tools in the name of making personal life better is extremely dangerous, and is a part of the ongoing trend of depersonalization of the individual that is turning him into an isolated pod monitored day and night in a dystopian-esque world created under the guise of good intentions and benevolence but always was the reverse.

Christians Have Been Replaced As The New Go-To Demographic
Major Turkish Journalist Warns: ‘Don’t Be Surprised To See Hostilities Spark Between Turkey And Russia In Syria By October.’ This Is Being Said As Turkey Is Running 150 Training Camps For Rebels In Syria
Follow