You are here: Home › Deep Fakes And The Future Of Epistemology 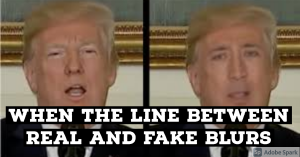 Can you believe your eyes? Some say yes, and some say no, for if a picture is worth a thousand words, when happens when real pictures no longer can be distinguished from fake ones? Such is a question being asked by one author, in a way, discussing the rise of deep fakes and the effects they will have on politics and society.

We are entering an age where we can no longer believe our own eyes, a political commentator has warned.

She said: “We are increasingly facing a future where media and content production is going to be made by AI.”

“Some experts who I interviewed for my book said that within five to seven years’ time 90% of video content online is going to be synthetic.

She explained: “The ability of AI to generate actual fake synthetic media is something that’s only been around for about two and a half years and can be traced back to the revolution in deep learning over the last five years.” (source)

Now this article is from the UK Daily Star, and I generally am careful about reposting their materials because of the often questionable content found on the site, from exaggerated to just plain inaccurate things with, from what I have seen, no real self-corrective measures carefully taken. That said, I found this piece interesting because it raises similar questions to those I have brought up about the future of AI and its use as a political propaganda tool.

I will not link to the sites, but as I have written, there are some serious websites where people can learn how to make ‘deep fakes.’ Most of these are related to the production of pornography (for reasons I have extensively discussed in the Shoebat archives), but the issue is really not about adult content, but what the developments in the industry will have for politics, government, and more.

When I first started writing on ‘deep fakes’ in January 2018, I warned explicitly that these programs represent an existential threat for the future because they would be able to produce false evidence that will undermine real evidence and be used to let loose a reign of terror upon the world like it has never seen before.

If you have ever watched a show such as “Cops” or any other “live action police” type show, criminals often who are caught in the middle of committing a crime will say they are innocent and “I didn’t do anything.” However, the people who are caught always get convicted and the proof that the people are guilty in such cases is due to VIDEO evidence. Without the video, many times these criminals (regardless of race) would not be caught because it would become a case of “he-said-she-said.” The video is what is used to convict these people in court because it provides incontrovertible evidence of their actions versus their stories. In some cases, video is used to exonerate people accused of crimes because if clearly a person said he is not at a certain location and he is not, then he did not do the crime.

This is now permanently changed due to this AI program….which is that AI could enable the expansion of crimes by the forging of video evidence in a way that will be available to all people, from the man-on-the-street to the upper levels of government, that has never existed before.

Now one might say that the police will be able to use digital forensics to detect if an alteration has been made. This might work for early stages, but given how fast technology is advancing particularly with AI and how scientists admit they don’t understand how AI works, what is to say that it will not reach such a point that it will be nearly impossible to tell if forged evidence is actually forged without considerable, concentrated work on a project, perhaps more work than a defense attorney team will be able to have the time or money to afford to do?

Now this is just for “simple” crimes. What if this were to be taken to another level of severity? Say, for example, of that of a foreign nation, where using advanced AI technology, a man can give the appearance that a foreign leader is speaking and giving commands or making statements against another nations that could cause a war, when the reality is otherwise? (source)

We can compare to what the Daily Star continues with, noting exactly what I warned about.

She told Express Online : “This is something that’s really, really cutting edge, really new, essentially a fake piece of media made by AI.

“We are increasingly facing a future where media and content production is going to be made by AI.

The technology to create a completely convincing video “puppet” was once limited to top-flight Hollywood studios but the day when a completely photorealistic “fake news” video can be created using a smartphone is less than five years away.

Already smartphone apps such as ReFace enable the user to drop themselves into Hollywood movies or big budget music videos.
That technology represents a real threat to democracy, Ms Schick added.

This is exactly what I find so concerning.

I have watched the development of this technology carefully, and it is at a point where a man can make videos using peoples faces- adult content -that are completely indistinguishable from the actual videos. What makes this very disturbing is that particular actions, which require interactions between persons that once upon a time could not be considered easy to carry out, are showing now that they can be done effectively by the average man.

Let’s take an example of this and recontextualize it for our purposes- the famous claims of Donald Trump and his ‘interaction’ with a Russian prostitute and certain acts that were allegedly performed.

I do not believe it is an exaggeration to say that a person skilled in using deep fake technology at this point would be able to, using a video of the same actions taking place, to effectively replace the faces and have it so that it truly does appear that Trump did what some claim he did. This is my opinion, and while you should do your own research and draw your own opinion, I can say that having witnessed the progress of the technology, I do not believe this is hyperbole, but a sobering reality whose consequences are truly not understood in their totality.

She continued: “It can be used of course as a tool of political propaganda.

“But the other thing about deep fakes that’s really important to politics is that in a world where anything can be faked, including video of you saying and doing things that you never did, everything can be denied.”

A corrupt politician caught on camera doing or saying something that should end their career could just write it off as a deepfake and suffer no consequences, she said.

“That’s the first adverse impact I think we’re going to see in politics before deepfakes and synthetic media even become ubiquitous,” she says.

“You’re already starting to see that where authentic evidence is emerging of people having said or done something and it’s being dismissed as a deepfake.

I do not think it is an exaggeration again to say that I believe Trump got lucky, and this is one of the last elections, if not the last Presidential election, where deep fakes will not be a serious issue, and for the future, there is a strong chance that they may become an issue, for just as the cycle of history so often turns in the same way, the tools created by man to liberate him are eventually turned against him in order to enslave him worse than what he has ever been before.

The reality of AI as a major trend for the future cannot be overstated enough. As I have warned and I will continue to warn, AI is part of another great ‘industrial revolution’ that with robotics, represents a threat to the human race like it has never before been seen in history, not because these tools are in themselves ‘bad’, but because the potential evil which they can be used for is almost beyond comprehension, as I do not believe any person at all, no matter who he is or how educated he is, or how much foresight one has, can truly understand the magnitude of the changes this may have on the epistemology of ourselves and the world, and of which the effects may permanently scar the face of history.

Will There Be A Second Presidential Debate, Or Is There A Need For One?
Syrian Jihadists Are Terrified Of Fighting With The Armenians. One Jihadist Says: “The fighting isn’t like anything I have seen. It’s like a movie.”
Follow